The Center For American Progress has a terrific new survey out on political ideology. The material in the survey is right up our alley, and is probably deserving of several posts, but I want to start with a relatively quick, 30,000-foot question: ideologically speaking, is there more that unites us as Americans or divides us?

The CAP survey posed 40 political and ideological statements to a group of 1,400 American adults, and asked them whether or not they agreed with them. You can answer the questions for yourself here; they cover a wide range of topics in the areas of economic and domestic policy, foreign affairs, societal and “values” issues, and the proper role of government. Although benchmark surveys of political ideology are nothing new, this is one of the most comprehensive and best-constructed efforts that I’ve seen.

But let’s not worry too much about precisely what those questions were for now — we’ll look at that in a subsequent post. Let’s simply take the answers to all 40 questions and plot them on a graph. On the vertical axis, we’ll plot the percentage of self-described conservatives that agreed with a particular statement, and on the horizontal axis, the percentage of self-described progressives and liberals who did the same. (The CAP survey included separate categories for “progressive” and “liberal”, which is another thing we’ll look at sometime soon, but I’ve combined their answers for the time being). This is what we get when we do that: 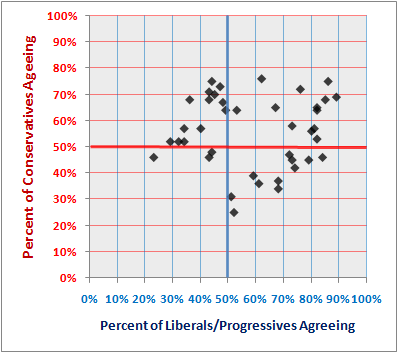 If you’re having trouble picking up on a pattern in that data, that’s because there isn’t one. The correlation between the fraction of conservatives and the fraction of liberals agreeing to a given question is essentially zero.

Rather, it seems there’s about as much that unites us as divides us. And although it’s possible that this result is just an artifact of the particular questions that CAP posed, for some reason it feels like the “right” answer. Americans like appeals to bipartisanship and post-ideological politics — but they also like good, old-fashioned partisan red meat. We’re a complicated country, and we have complicated politics.