Rafael Nadal isn’t playing up to his usual standards on clay, and that could be enough to make Sunday’s French Open final against Novak Djokovic very competitive.

Here are the stats behind that claim:

These stats are my best attempt to make headway on predicting a rivalry that has defined men’s tennis — and defied prediction — over the last five years. Nadal or Djokovic has topped the rankings for all but four months since July 2009. One or the other has won 12 of the 18 Grand Slam tournaments since then. And 23 of their Open-era record 41 career meetings have occurred during that span. First Djokovic had the upper hand, winning 10 of 12 matches from August 2009. Then Nadal won six of seven. Most recently, Djokovic has dominated, winning their last four meetings while dropping just one set.

On the surface, Nadal is the favorite on Sunday. After all, the surface is clay. Nadal is the best clay-court player ever, and he’s won 13 of his 17 matches against Djokovic on clay, including all five times they’ve met at the French Open. But Djokovic has been closing the gap. If Nadal wins Sunday, he retains the No. 1 ranking. If Djokovic wins, he seizes it.

To get a sense for which of Sunday’s finalists is playing better on clay, I compared each man’s record this year to his prior record on clay (since entering his prime). For Nadal, that began in 2005, the year he won his first French Open and entered the top five during the clay season. Djokovic’s ascent came two years later, when he entered the top five while playing on clay and then reached the U.S. Open final.

Simply comparing won-loss records wouldn’t cut it. Two close wins against weak opponents might be less impressive than a blowout win and a close loss, each against Top 10 players. So I isolated the comparison for each player only to opponents he played against on clay both this year and earlier in his prime. This should give us a good before and after. I used ratio of return points won to opponent return points won, a good proxy for margin of victory in tennis (using data provided by Jeff Sackmann of Tennis Abstract, plus data from rolandgarros.com for this tournament’s matches so far). The sample sizes weren’t enormous — 10 repeat opponents for Djokovic, 20 for Nadal — though each match included several dozen serve and return points for each player, stabilizing the result. (Obligatory boring tennis data note: I only used matches at tour level, for which data was readily available. So for instance, I didn’t use Davis Cup matches.)

The conclusion: Nadal has slipped this season. Of the 20 opponents we looked at, Nadal has been less dominant against 16 of them — including Djokovic, who beat Nadal in their only meeting this year on clay. 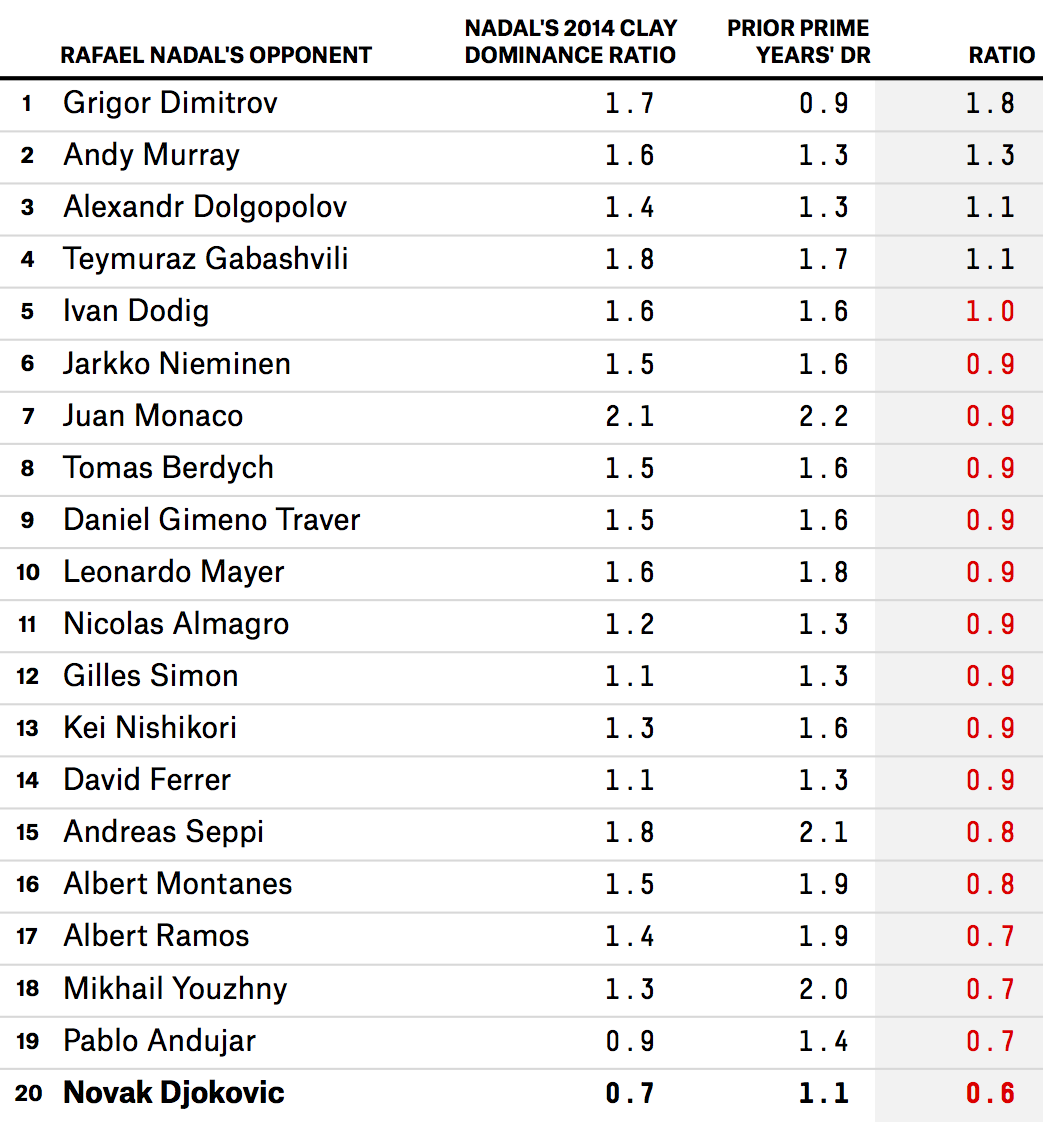 Overall, Nadal has been 7 percent less dominant. Djokovic, meanwhile, has been better this clay season, by 12 percent — doing better against six opponents, including Nadal, and worse against four. 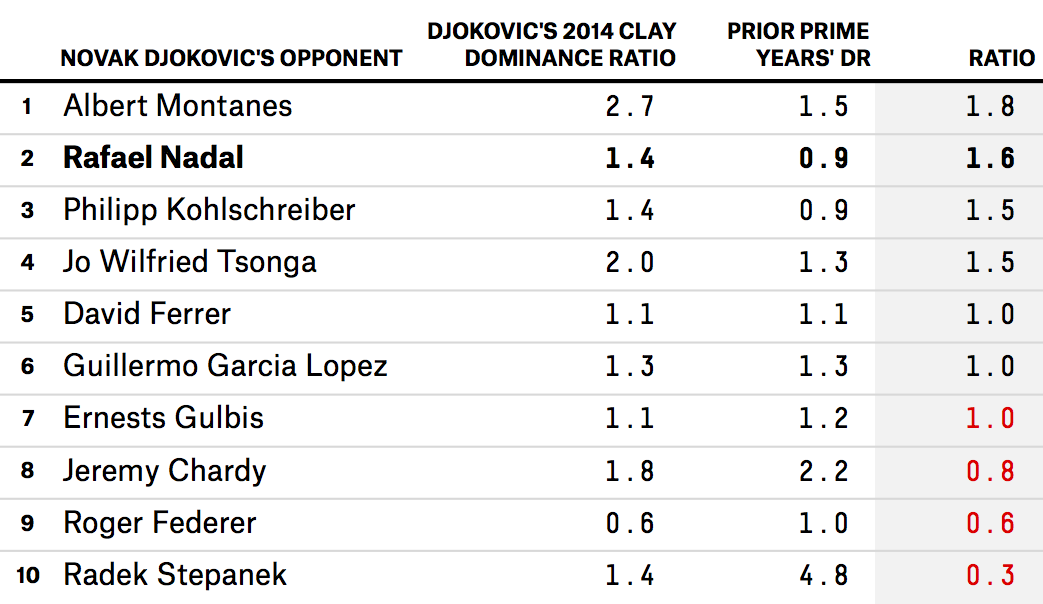 But this is Nadal, and this is the French Open. During his prime, he’s been 5 percent better at the tournament than he has anywhere else on clay — and 17 percent better than Djokovic has been in Paris. Nadal’s beaten Djokovic all five times they’ve met at the tournament. He gets to play most of his matches in the cavernous Court Philippe Chatrier, where he can roam deep behind the baseline and retrieve almost every ball. And winning two sets against Nadal doesn’t cut it in Paris: It takes three sets to beat him at the French Open. Of 89 best-of-five-set matches Nadal has played on clay, he’s lost just one, to Robin Soderling in the fourth round of the 2009 French Open.

Nadal already has shaken off his rusty clay play since arriving in Paris. Since losing the first set of his quarterfinal to David Ferrer, Nadal has won six straight sets, against Ferrer and Andy Murray, two of his biggest rivals — and none was close. His semifinal win on Friday was his most dominant against Murray on clay in the history of their rivalry.

If this all sounds like it adds up to a toss-up, that’s because it probably is. The sports books have Nadal, who has won the French Open eight of the nine times he has played, as just a very slight favorite. Last year when he met Djokovic in the semifinal, Nadal won 9-7 in the fifth set. Sunday could be just as close.

Correction (June 9, 10:03 a.m.): Nadal beat Murray in the French Open semifinals on Friday. An earlier version of this post incorrectly said their semifinal was on Saturday.