I don’t like criticizing our good friends over at Pollster.com, but a Tuesday article by Pollster correspondent Robert Moran, also the Executive Vice President at StrategyOne, espouses a bit of conventional wisdom which happens to be completely wrong.

Citing a Quinnipiac poll that has Ohio incumbent governor Ted Strickland ahead of Republican challenger John Kasich by a margin of 44-39, Moran writes that:

Barring some massive exogenous event, the next Governor of Ohio will be John Kasich. […]

In a two way race, political professionals don’t even bother to look at the spread between the incumbent and the challenger, they only focus on the incumbent’s support relative to 50%. Incumbents tend to get trace elements of the undecideds at the end of a campaign. Sure, there is the occasional exception, but this rule is fairly ironclad in my experience.

Although I have no particular comment on the dynamics of the Ohio race, which I have not spent much time following, Moran’s general sentiment is demonstrably false. What the actual evidence shows, rather, is the following:

1) It is extremely common for an incumbent come back to win re-election while having less than 50 percent of the vote in early polls.

2) In comparison to early polls, there is no demonstrable tendency for challengers to pick up a larger share of the undecided vote than incumbents.

This analysis focuses only on early polls: those conducted between January and June of an incumbent’s election year. I do not attempt to evaluate such claims with respect to late polls, such as those conducted in the weeks immediately preceding an election. It is late polls which are traditionally the subject of the so-called “incumbent rule“, which is the idea that voters who remain undecided late in the race tend to break toward the challenger at the ballot booth. (Note, however, the evidence for the late version of the incumbent rule is also mixed.)

For my study, I looked at all gubernatorial and Senate contests in the 2006, 2008 and 2009 election cycles in which (i) one of the candidates was an incumbent; (ii) there was at least one poll in the race conducted between January and June of the election year, as listed at Pollster.com, and (iii) the two major-party candidates collectively accounted for at least 90 percent of the vote in November. A total of 63 contests passed these screens and were included. Although the third criterion, which disposes of races in which there was a significant third-party vote, is not ideal in certain ways, it eliminates only 4 races and the conclusions here would not substantially change if they were included.

For the analysis, I took a simple average of all early polls as included in the Pollster.com database. In accordance with Pollster.com’s practice, this includes partisan polls and multiple polls conducted by the same pollster. In the vast majority of races, at least two polls were available. 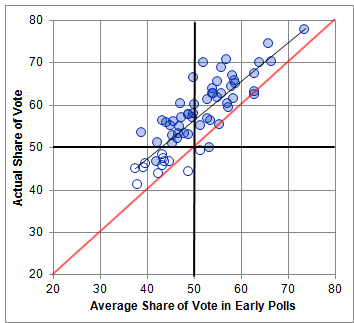 There are several noteworthy features of this graph:

3b) If we instead look at those cases within three points of Ted Strickland’s 44 percent, when the incumbent had between 41 and 47 percent of the vote in early polls, he won on 11 of 17 occasions (65 percent of the time).

4) Almost all of the data points are above the red diagonal line, meaning that the incumbent finished with a larger share of the vote than he had in early polls. This was true on 58 of 63 occasions.

4b) On average, the incumbent added 6.4 percent to his voting total between the early polling average and the election, whereas the challenger added 4.5 percent. Looked at differently, the incumbent actually picked up the majority — 59 percent — of the undecided vote vis-a-vis early polls.

4c) The above trend seems quite linear; regardless of the incumbent’s initial standing in the early polls, he picked up an average of 6-7 points by the election, although with a significant amount of variance.

5) The following corollary of Moran’s hypothesis is almost always true: if an incumbent has 50 percent or more of the vote in early polls, he will win re-election. This was true on 32 of 33 occasions; the lone exception was George Allen in Virginia, who had 51.5 percent of the vote in early polls in 2006 but lost re-election by less than a full point (after running a terrible campaign). It appears that once a voter is willing to express a preference for an incumbent candidate to a pollster, they rarely (although not never) change their minds and vote for the challenger instead.

A table of all races included in the analysis follows below.