Let’s take a look at what happened in the eight Mountain West states, including John McCain’s home state of Arizona. What was one election cycle ago a whitewash region for Republicans has morphed into a true swing region. Consider that heading into the 2004 elections, Republicans held 33 of 44 Congressional seats and swept all 44 electoral votes. After 2008, Republicans hold 20 of 44 seats in Congress and essentially split the Mountain West, winning 25-19 in the electoral vote tally. 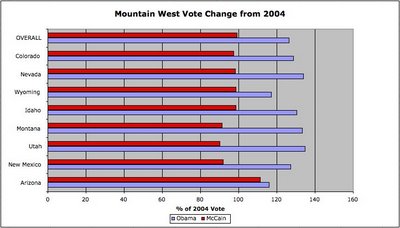 So what happened? While those who argue that the excitement of the first black candidate on a national ticket inspired millions of new voters in places like North Carolina, Virginia, and Florida, that’s not an easy answer in the Mountain West, which is mostly rural and has few African-Americans.

Barack Obama created nearly 900,000 new voters, through both a strong message and pounding shoe leather of his vast and talented organizing force. These organizers held single-minded focus on voter registration. Voter registration in huge leaps like we saw in Nevada, Pennsylvania and Virginia doesn’t happen on its own.

(While ACORN became a bitter complaint down the home stretch of the campaign, nobody who can be taken seriously believes this was an issue or in any way relates to this voter registration surge. If I work for ACORN and choose to defraud that employer so that they pay me an extra five bucks for registering “Mickey Mouse,” I haven’t cryogenically created Mickey Mouse in a lab somewhere who then goes and votes. I do it because I want the extra ACORN cash. ACORN, in turn, is legally obligated to turn in all voter registration forms it collects, even ones it segregates out as highly suspect.)

On the Republican side of the coin, during our trip across America in the final eight weeks of the campaign to chronicle each campaign’s field program, we routinely encountered an attitude from Republicans that made us think: cruise control. They simply didn’t believe — and told us directly — that Obama would create the new voters needed.

The machine Republicans have built up over the years, integrated with what was once a strong technological edge that has now evaporated, essentially worked in the Mountain West. While Republicans probably didn’t hit their vote goals in the Mountain West (vote goals are generally set ambitiously high), the story in the region is how the West was won by Obama and the Democratic candidates, not lost by McCain and Republican candidates.

This conclusion, at least regionally, comes at a time when “the now-established consensus is that Obama did very well in getting out his vote; but his 7 point margin of victory was largely accomplished by former Republican voters staying home.”

Even in McCain’s home state of Arizona, Obama gained nearly 16% on John Kerry’s total. The Obama-McCain margin there (McCain by 8.52%) was lower than the Bush-Kerry margin (Bush by 10.47%) by nearly two percent. Even where McCain improved on Bush in the Mountain West, Obama improved more.

To take comfort in the theory that “you can only vote to elect the first black president once,” as one of the great hacks would prefer to hope, such wishful thinking doesn’t work in the Mountain West, where Obama’s success cannot be attributed to high black turnout. John McCain won more voters in Colorado and Nevada than John Kerry, but McCain wasn’t even close against Obama in those states.

Those ten electoral votes are roughly balanced by the twelve from Wyoming, Utah and Idaho that Republicans have on lockdown. Montana is the closest state, which Obama lost by 2.26%. Colorado (Obama +8.95%) and Arizona (McCain +8.52%) are mirrors of each other, though without McCain on the ballot it seems clear that state would have been much, much closer.

How can we be sure of that? There are 281 counties in the Mountain West, and 266 outside of Arizona. Although Obama only improved on the Kerry-Bush margin in 7 of 15 counties in Arizona, still quite an accomplishment in his opponent’s home turf, he improved on the Kerry-Bush margin in a staggering 265 of 266 counties in the other seven states. The only county that regressed? Wyoming’s second smallest county, Hot Springs, where McCain improved on Bush’s margin by a minuscule 0.22%. This is a tiny oil and gas county that produced 2,480 votes in 2004 and only 2,546 in 2008.

(One of those two outliers was Nye County, Nevada, where we encountered one of the few obvious Republican organizer readers of FiveThirtyEight, and Obama only failed to improve on the Kerry-Bush margin by double digits because McCain improved on Bush by 12.35%, McCain’s best county improvement outside of Arizona aside from tiny Sublette County, Wyoming).

In New Mexico, Obama flipped Sandoval and Valencia counties to the north and south of Albuquerque, as well as adjoining Los Alamos County. He flipped Colfax County in the northeast and Luna and Hidalgo counties in the southwest of New Mexico. Finally, Obama flipped seven Montana counties, including Gallatin (Bozeman), Cascade (Great Falls), and Lewis and Clark (Helena). Obama also flipped Lake, Hill, Rosebud and Blaine counties, in no small part because Native voters turned out.

Though Obama didn’t win Montana, that state has clearly shifted back from an all-red enclave. Given the success of Brian Schweitzer, Jon Tester, and Obama’s dramatic gap-closing vote gains in Montana, it’s clear that the Democratic Party brand as a whole has made dramatic gains in what is now the swing region’s swing state.

Given all the foregoing, it’s time to bring around the point we made at the outset, about how the Mountain West shift breaks the back of Republican base presidential candidacies.

It’s hard to quibble with states on that list, as far as being susceptible to a Republican running for the presidency who doesn’t strongly appeal to moderates and at least some Democrats. Maybe Iowa, where Bush won in 2004, but that state has seen a shift to Democratic voting in 2006 and 2008. Though Pennsylvania has been considered a swing state in recent cycles, that can be put to rest with this election, which saw a blowout win by Obama and a structural edge of 52% registration. The other Upper Midwest states proved easy Democratic wins.

Given that Democrats have broken through and are in clear control along partisan registration lines in Nevada and New Mexico, those ten electoral votes put the Democratic candidate at a minimum tie, with one more EV needed for a clear win. Republicans could even regain Florida, Ohio, Virginia, Indiana, North Carolina, Colorado and Omaha, Nebraska and still lose the presidency.

If Republicans want to draw some kind of conclusion that they’re on the rebound given Louisiana House seats and Georgia’s expected victory, which we put at 88% likelihood before November 4, it may delay the urgency to revamp the party so that it can compete nationally in places like Colorado and Michigan. That denial is unequivocally good for Democrats. The Chambliss victory in Georgia disguises the fact that nationally, at the presidential level, the Republican base is too small and generates too few electoral votes. Republican lockup of the Plains, Deep South and Appalachia just isn’t enough. Republicans can’t simply point fingers at the media and insist it was all Obama favoritism and ACORN, a refrain we heard from Republican phonebankers — where they existed — coast to coast.

It’s uncomfortable to play the concern troll role of declaring what Republicans need to do to fix their party. That’s for the party and its members to decide. But we can point out that Obama won 283 electoral votes by 9 points or more, and 263 by double digits. As the Mountain West shows, coming to the conclusion that Obama 2008 was a perfect storm that will pass ignores the reality of the massive voter registration edges that storm leaves behind in places like Pennsylvania and Nevada.

Moreover, Republicans are on the losing end of the age and racial demographic shifts. Young voters and Latinos went overwhelmingly for Democrats. First time voters tend to brand themselves to one party, and that’s nothing but good news for Democrats. Folks like Michael Barone will continue to write pieces about how the kids won’t show up in the future, and Democrats should encourage that kind of straw-grasping. Democrats have caught up in the field program technology that gave Republicans a kind of false comfort in at least a several-point field turnout cushion.

The attitude was, “until you knock us out, the champ is the champ.” Well, consider 2008 a knockout.