In the past couple weeks, many states have announced plans to gradually lift the stay-at-home orders put in place to stem the tide of the coronavirus. However, polls show that most Americans believe it is too soon to reopen.

In their latest poll (conducted May 3-5), The Economist/YouGov found that only 11 percent of adults believed it was safe to end social distancing and reopen businesses right now. Six percent said it would be safe in about two weeks, and another 19 percent said it would be in a month or so. A plurality (29 percent) thought it would take several months, and 15 percent even said a year or longer. A Morning Consult survey taken April 29-30 found that just 20 percent of registered voters thought the economy should reopen in April (i.e., immediately) or May, 37 percent said June or July, 16 percent said August or September, and 12 percent said October or later. And a May 5 poll from Global Strategy Group and GBAO for left-leaning firm Navigator Research found that 60 percent of Americans opposed reopening the country in the next few weeks, versus 36 percent who supported it. Finally, a May 2-5 poll by Civiqs for Daily Kos asked respondents flat out whether they supported having a stay-at-home order in place in their state: Sixty-five percent said yes, and 29 percent said no.

Simply put, Americans think the stay-at-home orders are doing a lot more good than bad. That same Economist/YouGov survey found that 59 percent of adults believed the orders were extremely or very effective at stopping the spread of COVID-19; an additional 31 percent said they were somewhat effective, while only 10 percent doubted their effectiveness. In addition, a whopping 75 percent thought it was either very or somewhat likely that states reopening would result in an increase in COVID-19 cases. And in an Axios/Ipsos poll conducted May 1-4, 67 percent of Americans said that they thought returning to their pre-coronavirus life right now would be a large or moderate risk to their health and well-being; only 30 percent of Americans said they were willing to accept such a risk to return to their normal lives.

Even if businesses reopen, polls suggest many Americans would still choose not to patronize them. A Washington Post/University of Maryland poll conducted April 28-May 3 found that 78 percent of adults would be uncomfortable eating out in a restaurant right now, while just 22 percent would be comfortable. Respondents also said 67 percent to 33 percent that they would be uncomfortable going to a retail clothing store. However, some people might feel differently if states give the all-clear. Fifty-nine percent of respondents to an Edison Research poll for Marketplace (conducted April 23-28) said they would be comfortable returning to their normal routine when their state relaxes its stay-at-home order.

There are some signs, though, that people are itching to emerge from quarantine, although most are still following social-distancing guidelines. Per Navigator Research, the share of Americans who said they are spending almost all their time at home ticked down from 84 percent on April 24 to 78 percent on May 5. The percentage who were avoiding in-person interactions with family and friends went from 71 percent to 66 percent. And the latest poll from Axios/Ipsos reported that 26 percent of Americans had recently visited friends or relatives, up from 19 percent in their April 17-20 poll.

The slip in Americans’ social-distancing habits could have to do with the warming weather around the country. It could also be that, as some public-health officials feared would happen, more people feel safer going outside now that many states are mandating face masks. Indeed, the share of Americans who say they are wearing face masks in public is on the rise. According to The Economist/YouGov, 75 percent of adults said they have worn a mask in public, up from 53 percent in mid-April. And 73 percent of Axios/Ipsos respondents said they always or sometimes wore a mask when leaving the home; that number was 56 percent in their April 10-13 survey.

Overall, though, Americans remain as worried about COVID-19 as ever. According to our coronavirus polling tracker, 68.2 percent of Americans are either very or somewhat concerned that they or someone they know will become infected with the coronavirus; only 31.3 percent are not very or not at all concerned.

But polls consistently show that, to the extent medical and economic concerns come into conflict, Americans are prioritizing their health. According to Monmouth, 56 percent thought that minimizing the number of people who get sick is a more important consideration in lifting restrictions than avoiding a sustained economic downturn; only 33 percent thought the economy should be the priority. In the Edison Research/Marketplace survey, 65 percent said maintaining stay-at-home orders to stop the spread of COVID-19 was more important to them than relaxing those orders to help the economy, versus 33 percent who said the opposite. The gap was widest in Morning Consult’s data: Eighty percent of voters said Americans should continue to socially distance even if it means damaging the economy, and just 20 percent said the country should stop social distancing to stimulate the economy, even if it means spreading the coronavirus.

Finally, the percentage who approve of President Trump’s handling of the pandemic continues to decline. As of Thursday evening, 43.5 percent approved and 51.1 percent disapproved, bringing Trump’s coronavirus approval numbers almost perfectly in line with his overall job approval numbers.

Specific polls homed in on Trump’s daily coronavirus briefings as something that is hurting his image. In an April 22-24 Morning Consult poll, 53 percent of adults said the word “frustrating” described Trump’s conferences either very or somewhat well, versus 30 percent who thought the word did not fit. Respondents also said 46 percent to 36 percent that they were misleading and 46 percent to 34 percent that they were counterproductive. And according to Monmouth, only 33 percent of adults found Trump’s advice on the coronavirus helpful; 23 percent found it neither particularly helpful nor harmful, while 42 percent found it actively harmful. 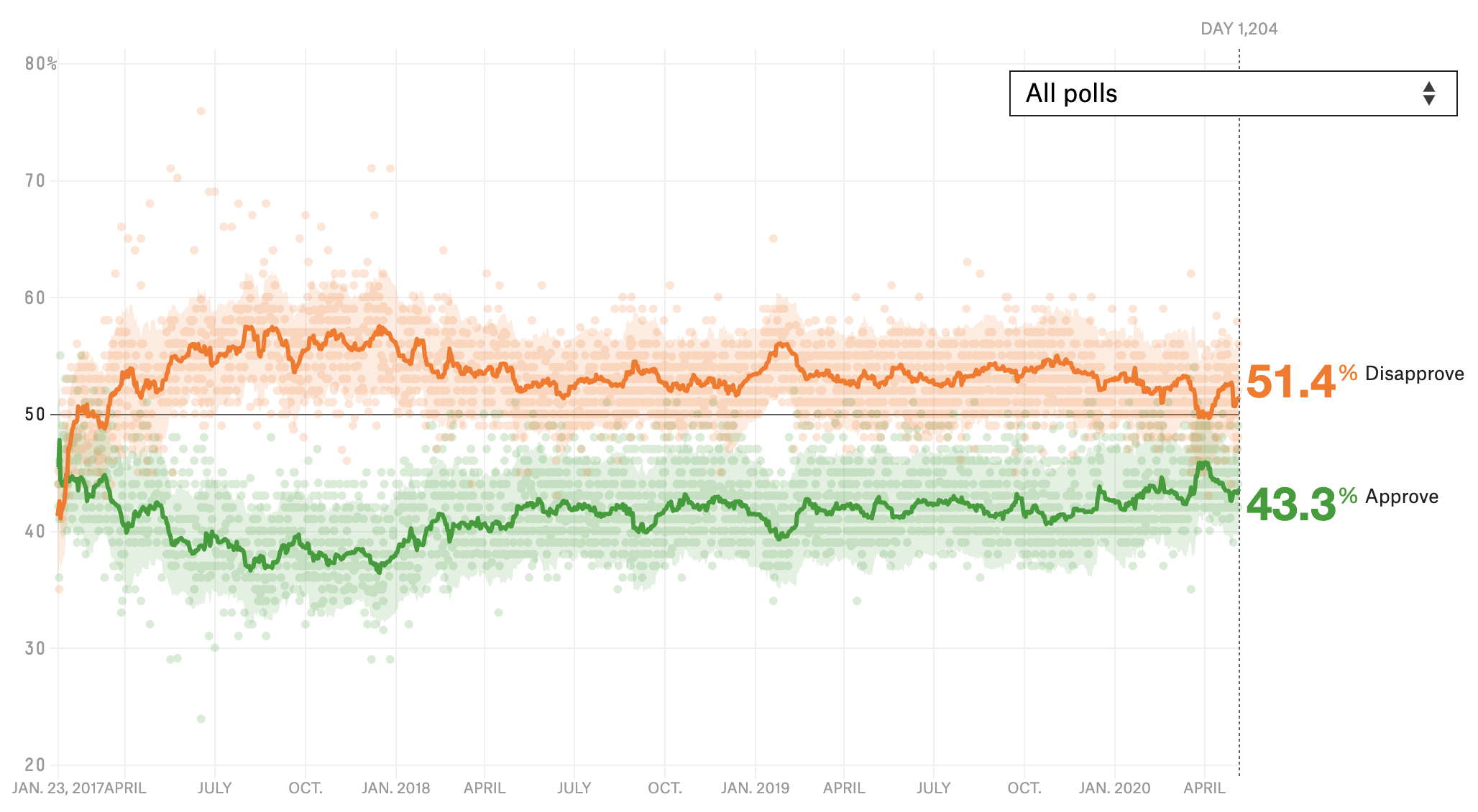 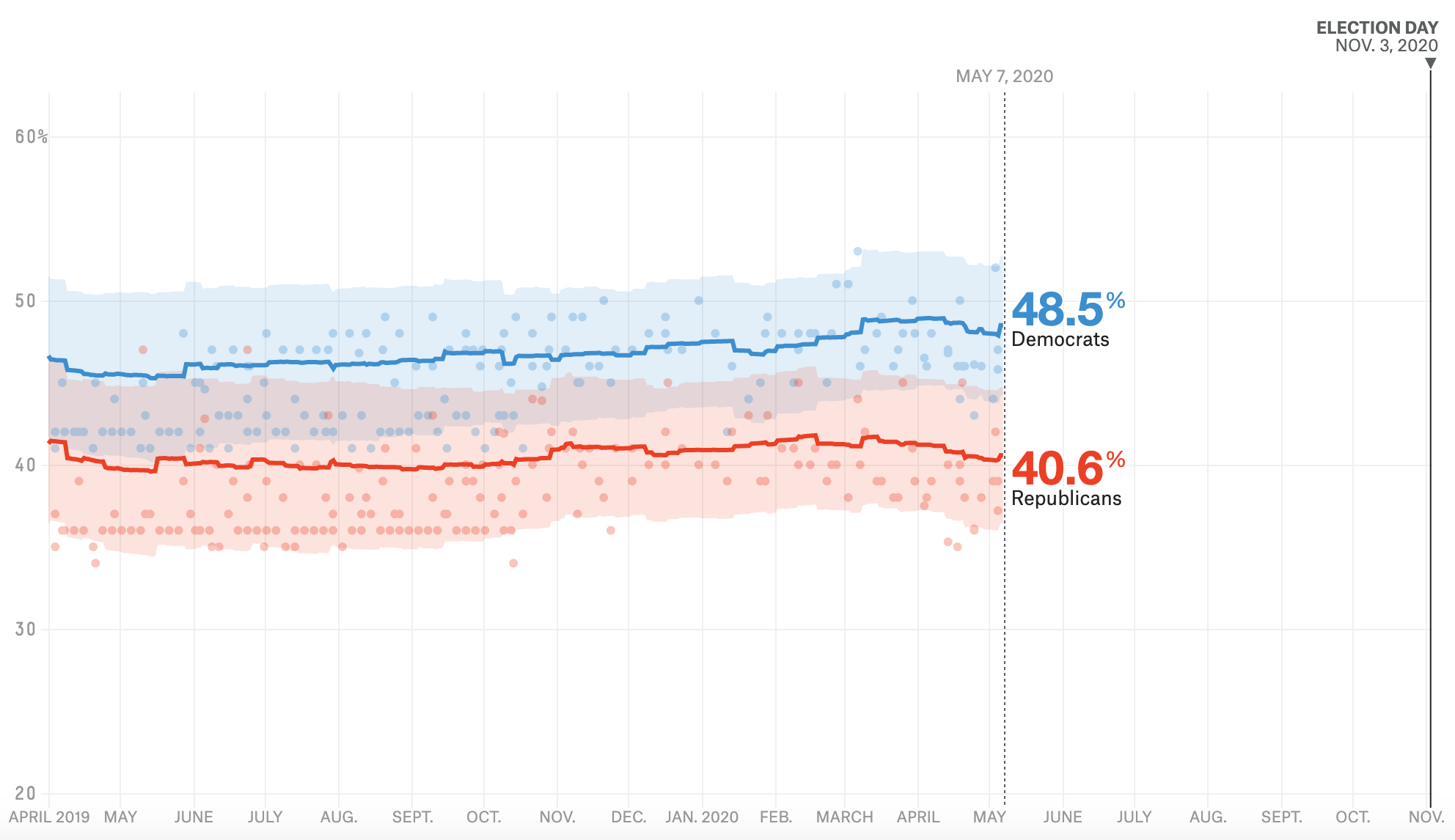