Arizona might have less symbolic importance than Michigan, but it is probably of more practical significance. That is because it’s one of the few Republican states to award its delegates on a truly winner-take-all basis, without any qualifications or complication. Get one more vote than your rivals in Arizona, and you take all 29 of its delegates.

The most tangible advantage in Arizona belongs to Mitt Romney, and it is because the state has a reasonably high Mormon population. In the 2008 primary there, Mormon voters constituted 11 percent of the electorate — and Mr. Romney won 88 percent of their votes, versus 8 percent for John McCain.

If Mr. Romney posts similar numbers among Mormon voters this year in Tuesday’s primary — and there’s no reason to think that he won’t — that works out a nine-point built-in advantage in the state.

Without that Mormon edge, in fact, the state would essentially be a toss-up. Mr. Romney is now projected to win the state by 11 points over all, according to a FiveThirtyEight forecast model, which works out to an 89 percent chance of winning given the uncertainty inherent in the forecast.

The 11-point advantage that the FiveThirtyEight model gives Mr. Romney is larger than his lead in all but one recent poll of the state. But the model is designed to be aggressive about identifying a trend, and there is perhaps the slightest hint of one toward Mr. Romney in Arizona. The two polls that have been in the field most recently — from NBC/Marist and We Ask America — gave him his largest advantage there. 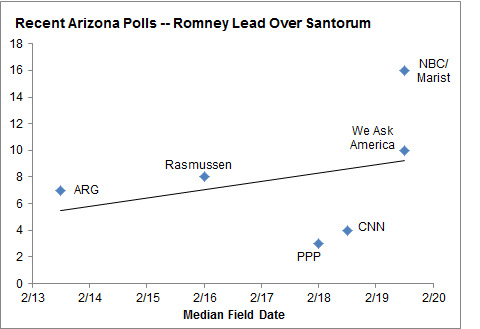 With that said, there has been quite a bit of variance between different polls of the state, with Mr. Romney’s lead varying by margins of 3 to 16 points. I don’t know that there is anything special about Arizona that is causing this; we are also seeing a fairly wide spread in the polls in Michigan, as well as in national surveys. As there now seem to be differences in the level of voter enthusiasm for the candidates — more for Rick Santorum, less for Mr. Romney — the assumptions that pollsters make about turnout will tend to be more important.

Mr. Santorum’s deficit in Arizona is just large enough, however, that it would qualify as something of a surprise if he won the state. It might require either that he performs strongly at Wednesday’s debate in Mesa, Ariz.,  or that he simply beats the pollsters’ expectations on primary night itself, something he has done in several states so far.

Because there is no delegate value in merely keeping things close in Arizona, however, it is also worth watching to see whether Mr. Santorum essentially abandons the state and downplays expectations there, instead concentrating his efforts on Michigan, which also votes on Tuesday.

If Mr. Santorum wins Michigan narrowly but loses Arizona by a clear margin, he will probably fall further behind Mr. Romney in the delegate count given Michigan’s complex delegate-selection rules. Such an outcome, however, would very probably allow him to put a strong spin on the outcome — and a credible enough one, since if Mr. Romney loses Michigan, his native state, it is hard to know where he might win elsewhere in the Midwest.

But if Mr. Santorum loses both Arizona and Michigan, however narrowly, he would fall behind, according to both math and momentum.