The registration fee might be only $65 per kid, but parents who don’t pick favorites might find the National Triiiplet Convention, which opened Friday in California, a pricey get-together. It sounds worth it though: The schedule includes a triplets parade and workshops with promising titles, including “It’s Mine! Conflict Resolution” and “Diapers to Medicare: Lessons learned from 65-year-old triplets.”

The organizers are expecting more than 50 families to attend, slightly less than the 60 families they anticipated for the 2011 convention. That’s not enough of a decline to read anything into, but it did get me wondering about the number of triplets born each year. Triplet births are at their lowest level in 18 years — despite the fact that the number of twins born has been on the rise.

In 2013, according to the Centers for Disease Control and Prevention, there were 131,269 twin births, 4,598 triplet births, 276 quadruplet births and only 45 births that involved five babies or more. And the CDC has a more detailed publication, covering the period from 1990 to 2012, that shows the steep rise in twin births and the recent decline in births of triplets or more.

Here’s the rate of twin births: 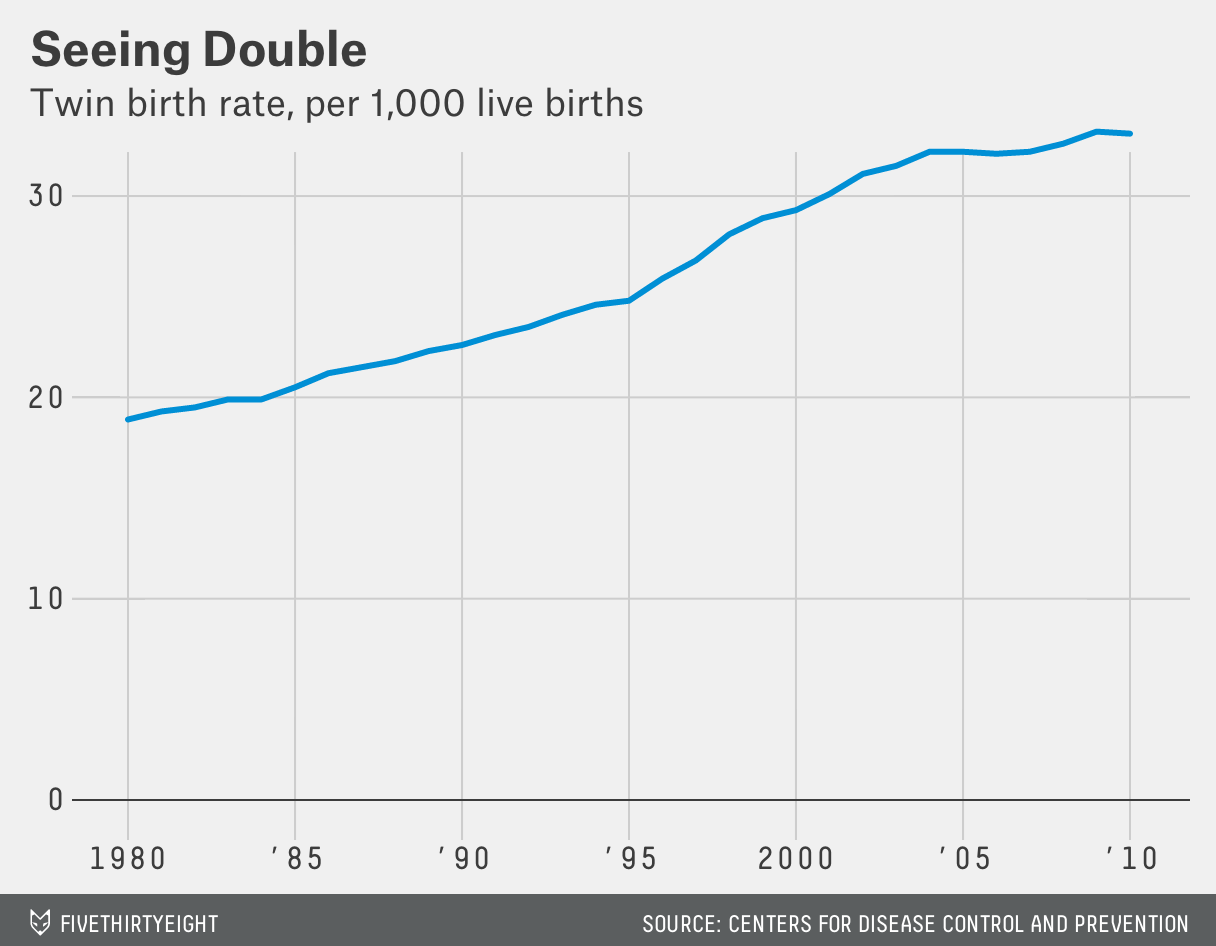 And here’s the rate of triplet-plus births (the scale of the y-axis — number of births — is smaller than in the above chart): 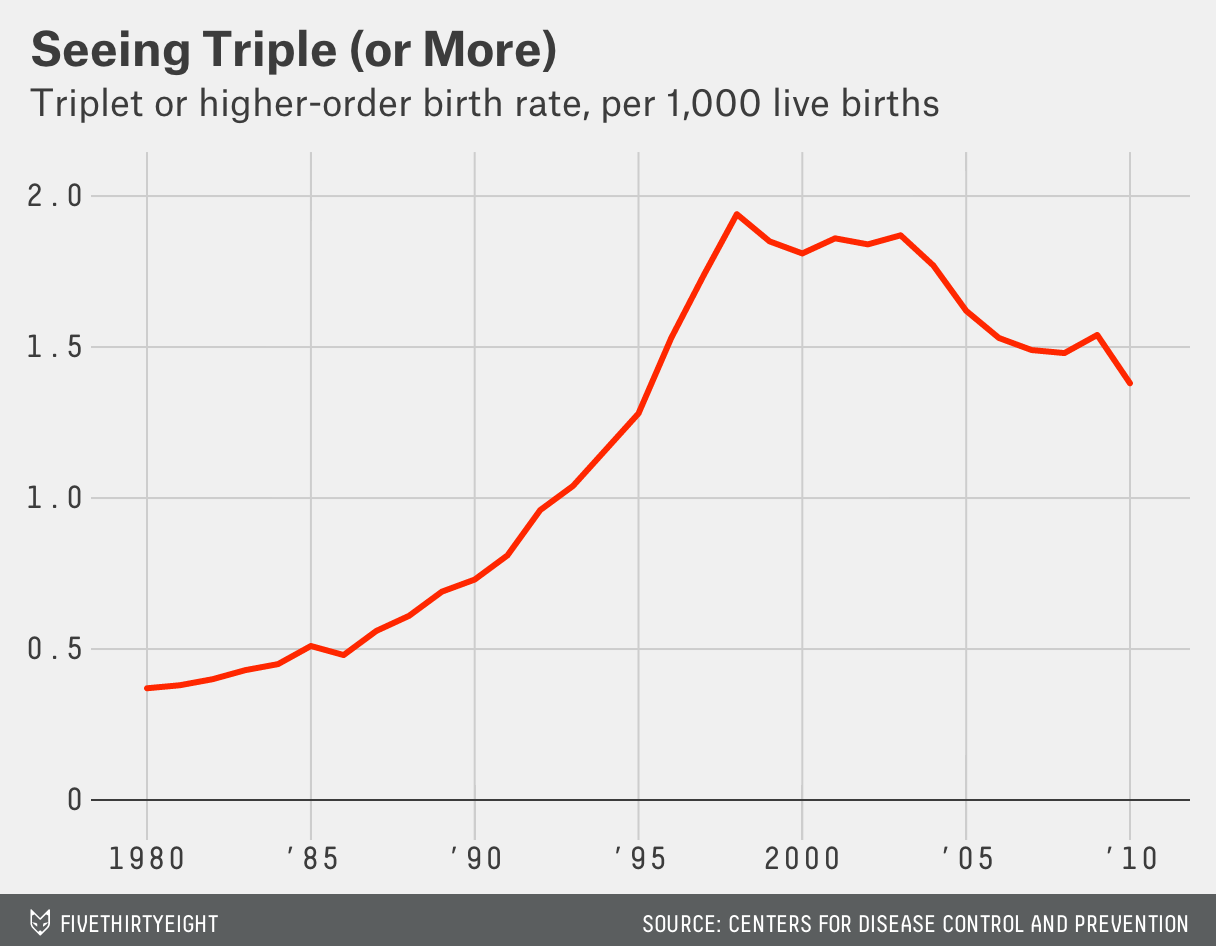 That seemed confusing to me. I thought that the rise in multiple births was due to assisted reproductive technology (ART, though you’re probably more familiar with the acronym IVF; in-vitro fertilization is the most common method used). ART’s been used in the United States since 1981 to help women become pregnant. To figure out why triplets are declining, I clearly needed to check my assumptions.

So, is ART responsible for the rise in twin births? And if so, why is it not affecting the number of triplet-plus births? Turns out, the answer may be pretty simple. According to the CDC, improvements in ART technologies have sought to reduce the number of higher-order multiple births, in line with guidance from the American Society for Reproductive Medicine, because those babies face a higher risk of death. As the CDC said: “In 2010, the latest year for which mortality data are available, twins were more than 4 times, triplets 10 times and quadruplets more than 20 times as likely to die in infancy.”

But there’s one more piece to the puzzle. I had assumed, when I looked at who the mothers of those multiple births were, I had evidence for the ART assumption: They were much older. What I didn’t realize though was that even without treatments, older women are naturally more likely to have a multiple birth because they are more prone to producing multiple eggs in a cycle. So, part of the reason why twins are on the rise is because more women are having children at a later age. The CDC thinks that about one-third of the rise in twins is due to those natural factors — the rest attributable to the growing use and effectiveness of ART. 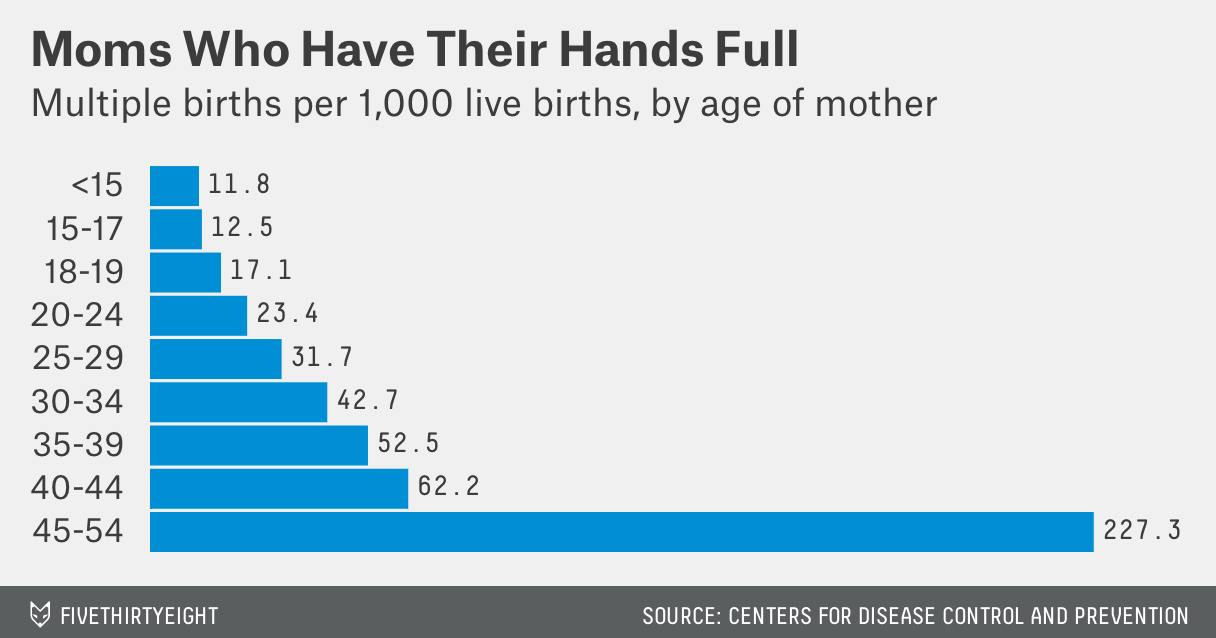