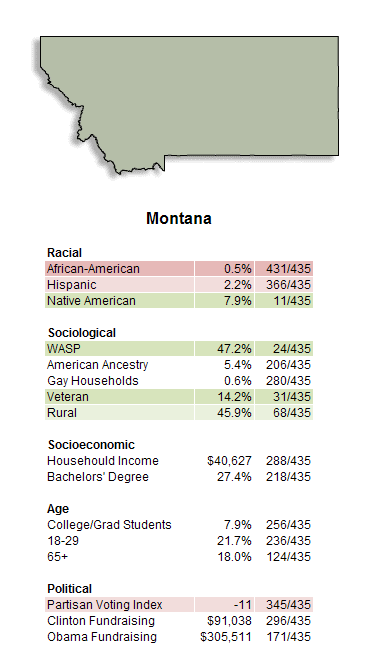 As compared with the night of May 20th, when the combination Obama’s embarrassing margin of defeat in Kentucky and the long break separating its poll closing from the one in Oregon led to a sort of anticlimactic night, the optics work out relatively well for Obama tomorrow. Tactically, his objective is round up enough superdelegates to hit 2,118 before Chris Matthews goes to sleep. But aesthetically, his goal is probably the following: be the first one to have a state called for him. That could be accomplished either by winning South Dakota outright, or by keeping it close enough that the networks are ready to call Montana first, where polls close an hour later. The general rule of thumb is that for the networks to call a state immediately, they need to see about a 15-point margin in the exit polls. Although it is by no means a completely safe bet for Obama, we expect him to achieve that threshold.

What Barack has going for him: At a surface level, Montana and South Dakota are pretty similar. They are both exceptionally white states, with the principal minority group being Native Americans. To the extent there are differences, however, they tend to favor Obama.

Montana’s Democratic electorate is somewhat more progressive than the one in South Dakota, but also more independent-minded and libertarian. Its signature issues are probably being pro-environment and pro-gun; Obama tends to do well on the former issue, whereas Montanans see Hillary as too much of a big government power broker to have much credibility on the latter. Montana has fairly high levels of education, and though its incomes are below average, Obama tends to do well in “bohemian” areas where education runs ahead of income.

While these are not exceptionally large differences, they are compounded by the fact that Obama has spent more time on the ground in Montana than Clinton, and that Montana has an open primary, with no apparent sign of interference from Operation Chaos. Obama has also fundraised reasonably well in Montana, whereas Clinton’s numbers are marginal. Also, Montana is a pretty state, and Obama has won every pretty state except California (OK, we made that last part up).

What Hillary has going for her: By any standard definition, Montana is white and working class. Neither of the Democrats’ two All-Stars in the state, Brian Schewitzer and Jon Tester, have yet endorsed Obama, so Clinton does not have to contend with the institutional support that Obama has in Tom Daschle’s South Dakota. Bill Clinton carried Montana in 1992.

Apart from these superficial markers, however, Clinton isn’t a great fit for the state’s political culture, which in some ways resembles the Pacific Northwest as much as it does the Prairies. It might be thought that Hillary performs well in rural areas and Montana is quite rural. But she really only performs well in some types of rural areas, generally those associated with cultural conservatism, which are more likely to be found in the Southeastern quadrant of the country (Obama, by contrast, performed well in OR-2, one of Montana’s closer comparables). Although Bill has worked Montana aggressively, Hillary has largely abandoned the state for South Dakota, and her campaign’s body language reads as a probable double-digit loss.

Projection: Our numbers work out to Obama 59.1, Clinton 40.9, or a victory margin of about 18 points. We expect a heavy turnout of about 166,000 in Montana, which does not have quite the voting culture that you find in the North Central portion of the country, but does have an open primary and a somewhat larger population. As measured in votes, our projection is Obama 98,373, Clinton 68,079.

Montana’s delegate allocations are a little funky, with the state divided up into two pseudo-CDs based on Montana’s old congressional districts from the 1980s (it has just one now). Each district has five delegates; any margin of victory would give Obama (or Clinton) three of those five, whereas they’d have to hit 70 percent to get a fourth. So in practice, the district-level delegate allocations will very probably be 3-2 Obama and 3-2 Obama. On an extremely good night, Clinton might win the Eastern district, and Obama might hit 70 percent in the Western district, but those outcomes are unlikely.

Obama has a better chance to win a fourth at-large delegate, which would require 62.5 percent of the vote, but we have him falling a bit short. The 2 PLEOs will definitely be split 1-1.