Until a few years ago, three-quarters of people in sub-Saharan Africa were cut off from the financial system. They had no relationship with a bank, making it difficult to send and receive money, or to get credit. But then a new, cheap device came along and quickly began improving the financial lives of millions of people. In a short span of time, mobile phones have radically altered personal finance in the region.

Twelve percent of all adults in sub-Saharan Africa use their phones for non-bank financial transactions, by far the highest rate of any region in the world, according to a report released Wednesday by the World Bank. 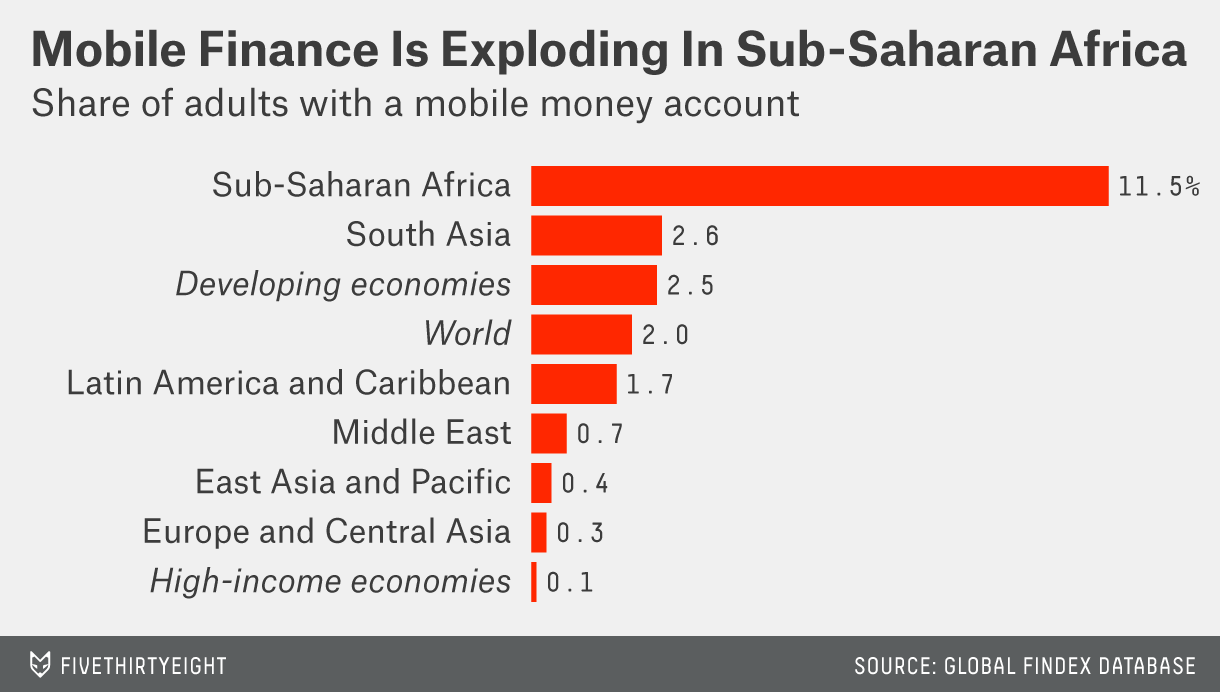 The mobile revolution there is part of a broader trend of democratization of finance around the globe that’s giving far more people a first step into the financial world. The number of adults worldwide with a bank account grew by 700 million between 2011 and 2014, according to the World Bank, an 11 percentage point rise to 62 percent of all adults.

These figures come from the World Bank’s Global Financial Inclusion database, known as the Findex. It’s composed of over 100 indicators and is based on interviews with about 150,000 adults across 143 countries. That makes it by far the largest and most comprehensive study of financial inclusion — the marker for whether people are connected to the formal financial system.

Financial inclusion means having an account of some sort, either at a traditional institution like a bank or credit union or through a mobile money account. (Mobile money accounts are phone-based services, untethered to a financial institution, for paying bills and sending cash.) Either method allows people to pay bills more efficiently; to send and receive remittances; and to take the first step toward accessing credit to make larger purchases or start a business.

The growth of financial inclusion has led to a 20 percent drop since 2011 in the number of adults without access to a bank (down to 2 billion worldwide). While growth has been strong, wide gaps remain. In the richer developed economies, some 94 percent of adults have an account, while in emerging economies only 54 percent do. The Middle East lags all regions with only 14 percent of adults having an account in 2014.

There are 13 countries worldwide where 10 percent or more of adults have a non-bank mobile money account, and they’re all in sub-Saharan Africa. While it’s an impressive phenomenon for the entire region, the country-level figures are stunning. Kenya is a huge outlier with 58 percent of adults there having a mobile money account. In five countries — Côte d’Ivoire, Somalia, Tanzania, Uganda and Zimbabwe — more adults have a mobile account than a traditional one.

The latest World Bank report does not examine why this growth in mobile money accounts has been so strong in the region. But one explanation might be microfinance, the practice of making very small loans to entrepreneurs, often in developing economies. In 2007, Safaricom launched M-PESA, a pioneering microfinance program built on mobile cash transfers. It has since grown to be the dominant payment technology in Kenya and Tanzania.

With the spread of microfinance came the need for a better payments technology suited to the needs of the region. Mobile money accounts are cheap, easy and (with the ubiquity of phones) accessible.