The opening of Camden Yards in 1992 ushered in a retro era of MLB ballparks. The downtown Baltimore stadium was a game-changer in design, aesthetics and location. It sparked the greatest boom period in stadium construction since the openings of Shibe Park in Philadelphia, Sportsman’s Park in St. Louis and Forbes Field in Pittsburgh marked the beginning of the concrete-and-steel stadium age more than 80 years earlier.

But the retro era may be over. The architects of the Texas Rangers’ new home say its structure is a step forward in ballpark design. Globe Life Field, they say, is something new.

When the Rangers begin play at their new home next week, it will mark the 23rd stadium opened since Camden Yards was christened in 1992, including two that have already been replaced — Turner Field in Atlanta and the Rangers’ previous home, Globe Life Park. But the Rangers believe this facility is distinct from the others in this time frame. While its exterior has been likened to that of a Costco, its interior is what will matter. When fans are permitted to enter, they will find many seats closer to the field than they are in retro parks — and certainly closer than they were in the Rangers’ previous home. Fans will also find the park serving a relatively new function: as the anchor of a suburban, mixed-use development plan.

To illustrate perhaps the most important design advancement of Globe Life Field, Fred Ortiz of the firm HKS, the stadium’s principal architect, shared with FiveThirtyEight two images that served as inspiration. The first was a black-and-white photograph taken from the upper deck on the third-base side of the long-demolished Griffith Stadium in Washington, D.C. Ortiz noted how intimate the park was, how close fans were to the playing surface, even those in the cheap seats. The drawback? The steel columns that supported the upper-deck overhang and coverings obstructed views of the action. Ortiz then showed the next image, which was the same photo from the same vantage point, with the same fans wearing the same straw hats. It was identical, save for one difference: The supporting columns and beams had been edited out of the photo.

[Related: The Dodgers’ Legacy May Depend On This Short Season]

“What if we could eliminate those and bring fans closer to the field,” Ortiz asked, “to change the dynamic of the cross section of a typical ballpark?”

Ortiz and his team did just that. The first row of the upper deck at Globe Life Field is nearly 30 feet closer to the playing surface than the Rangers’ previous, retro-era home, according to an overlay of their profiles. The last row is nearly 33 feet closer and just a few feet higher in elevation. The first suite level is 39 feet, 7 inches closer, and the closest seating behind home plate is 10 feet closer, just 42 feet from home plate. The distance is the closest to home plate in all of the major leagues, according to Clem’s Baseball stadium database. 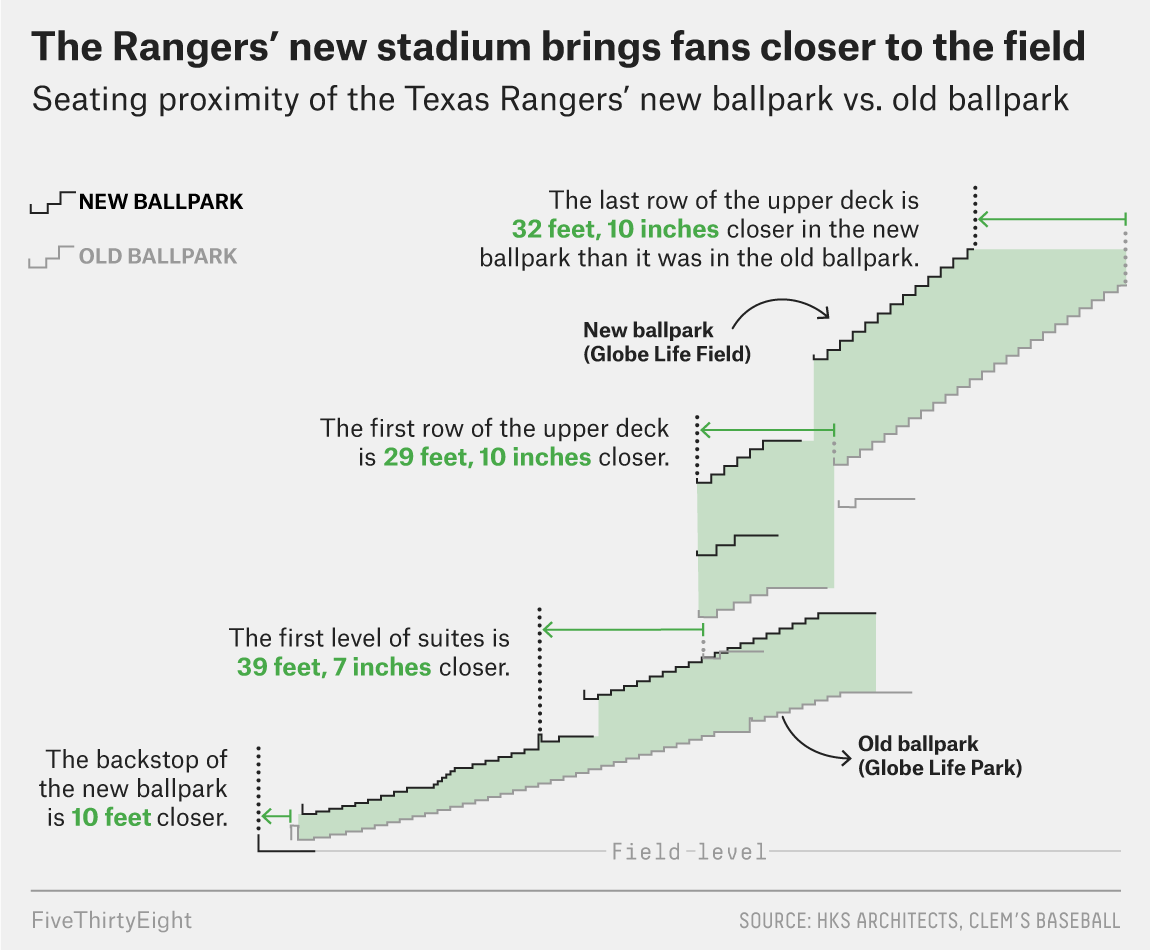 Retro ballparks like the Rangers’ previous home were widely hailed as improvements — both in aesthetics and fan friendliness — over multi-purpose stadiums, many of which were built in the 1960s and 1970s. Retro parks were designed to have the charm of an early 20th-century, baseball-only ballpark, with features like asymmetrical dimensions that mimicked the designs of older parks that had been constrained by building within city blocks. And like those first concrete-and-steel parks that inspired them — only with modern amenities and wider seats — they were often woven into the urban fabric within a city center.

Still, retro parks are not without their flaws.

In order to eliminate obstructed seating and add layers of revenue-generating suites and club levels, many seats in modern stadiums have been pushed further up and away from the playing surface.

According to a collection of stadium profiles at Clem’s Baseball, most fans were never more than 60 feet above the playing surface at the old Tiger Stadium in Detroit. That elevation was similar to other “jewel box” parks of the early 20th century. But at Comerica Park, Detroit’s retro park, the first row of the upper deck is more than 60 feet above the playing surface. The top rows of the upper decks at Progressive Field, the new Yankee Stadium, Minute Maid Park and Globe Life Park are all higher than 120 feet.

Retro parks also pushed fans away from the action. That can be measured by “shade” percentage, or the amount of second deck overhang above the first level of grandstand. For example, 55 percent of Wrigley Field’s lower deck is covered by overhang — the greatest mark in baseball, according to Clem’s database. That means the upper tiers of Wrigley are closer to the playing surface than those of parks that opened from 1992 to 2017, which have an average lower-deck shade of 26 percent.

Ortiz and HKS cantilevered the decks at Globe Life Field to produce more overhang than in the retro parks but without the obstructive steel pillars of the jewel box parks. This required some clever engineering: The further out the decks hang without beams to hold them up, the more backside support they need. They also split the decks into what Ortiz called multiple “trays” of seating and reduced the rows in each deck. There are only 22 rows in the field-level grandstand at Globe Life Field, before the first break in decks — the fewest in MLB. On average, there are 36.5 rows of first-level seating in the parks that opened from 1992 to 2017, according to Clem’s Baseball stadium database.

While touring the then steel-and-concrete skeleton of the facility last year, Rangers manager Chris Woodward told a team official that it didn’t feel like a stadium, rather, “an arena.” Ortiz said so many rows in retro-parks have resulted in a lower rise, pushing back the main concourse and upper decks and drawing fans away from the action.

The 22 ballparks that opened between 1992 and 2017 averaged a distance of 3.17 miles from their respective city halls. The park in Arlington, Texas, was the only site more than 10 miles from its corresponding metropolitan city hall.1 Paul Goldberger noted in his book “Ballpark: Baseball in the American City” that the movement toward downtown stadiums began with a minor league park, Pilot Field, that opened in Buffalo, New York, in 1988. “[It] sat comfortably within the downtown grid of streets like the ballparks of an earlier era … widely respected as the first postwar example of a baseball park successfully integrated into the urban fabric of an older city.”

Pilot Field created a new model that was followed on a greater scale by the Baltimore Orioles. Larry Lucchino, then an Orioles executive, pushed for the retro model over the example of the Chicago White Sox’s Guaranteed Rate Field, which opened in 1991 and was viewed immediately as a design failure — a “suburban stadium placed inside the city,” as Goldberger described it.

“A native of Pittsburgh,” Goldberger wrote, Lucchino “had seen the lyrical Forbes Field replaced by the multi-use monolith of Three Rivers Stadium, a downgrade that he felt had forever shaped his view of baseball parks.” The chief advocates of the Camden Yards design — Lucchino, architect Janet Marie Smith and Eli Jacobs, who bought the team in 1989 — “all loved old-fashioned, dense, walkable cities and the traditional baseball parks that were often a part of them.” 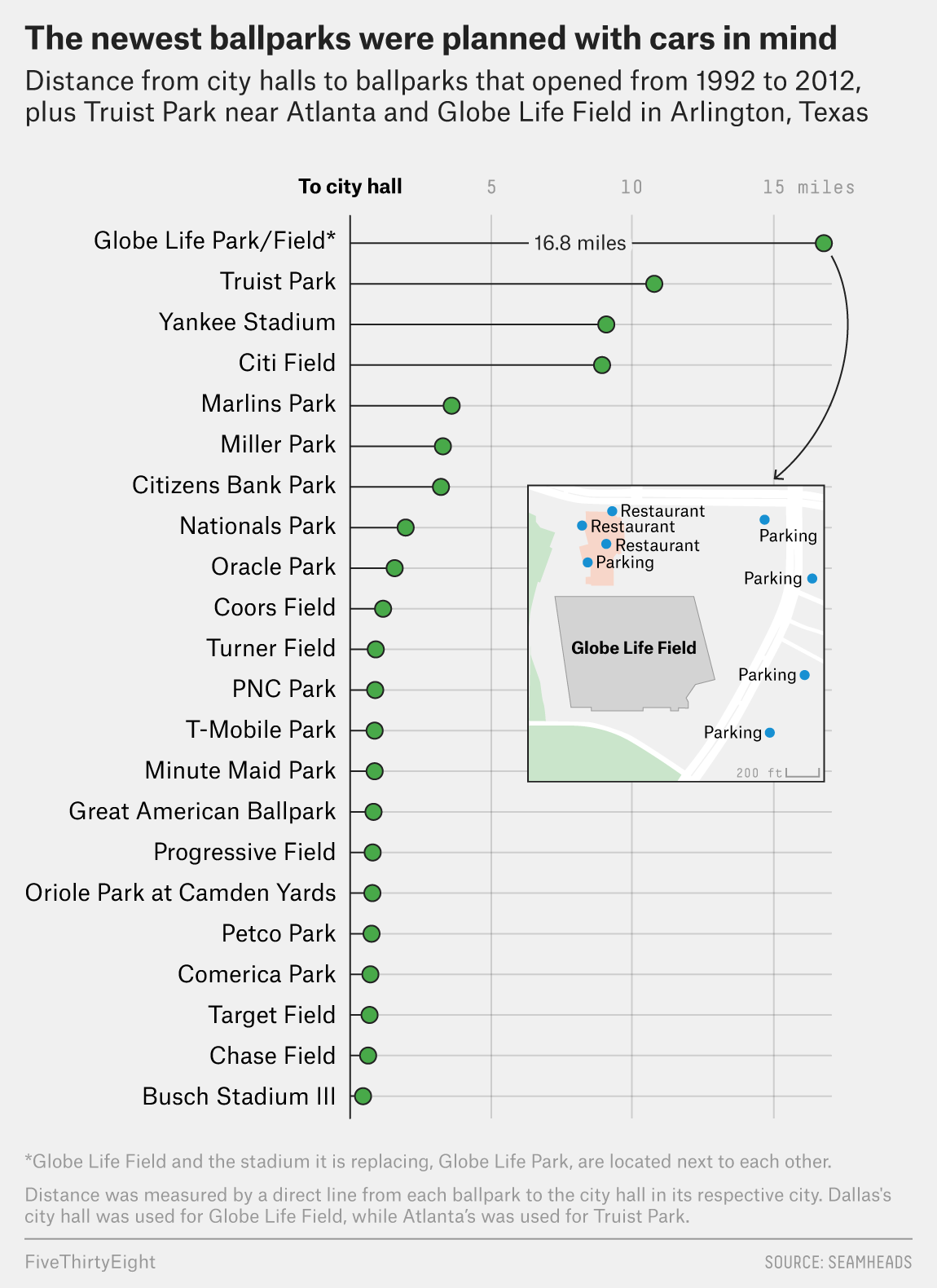 Though there were rumors that the Rangers would move to Dallas — both before the original ballpark in Arlington opened in 1994 and again before this latest park — the team has stayed put in its suburban home, 16.8 miles from the Dallas City Hall. The other latest ballpark — the Braves’ Truist Park, just renamed from SunTrust Park — is also in the suburbs, 10.8 miles from the Atlanta City Hall. They are both largely car dependent, located near interstate arteries. And both of these stadiums — MLB’s two newest — offer a new model: ballparks built as anchors in suburban development plans.

The new parks in Arlington and Atlanta are surrounded by hotels, restaurants and retail that the teams have a stake in. It’s a new lucrative revenue stream for the owners of MLB teams. The Braves’ revenue from development, which includes the mixed-used development around the team’s ballpark, was about $38 million last year, according to financial filings from the Braves’ parent company, Liberty Media.

Goldberger wrote of the mixed-use construction projects: “The commitment to a vibrant and open urbanism that is aspired to (in retro-era parks) is threatened by the very latest development in ballparks, the movement away from connecting to the real city in favor of envisioning the ballpark as more like the centerpiece of a developer-built theme park.”

This phenomenon isn’t just for new stadiums: The owners of the Chicago Cubs recently added similar mixed-use space near Wrigley Field, the second-oldest park in the majors.

“Sports-anchored mixed use is a tremendous opportunity for the team and the community beyond the game,” said Byron Chambers, design director of Populous. The firm, formerly known as HOK Sport Venue Event, designed Truist Park2 along with many retro stadiums, including Citi Field and the new Yankee Stadium. “I think you’re going to see more and more ownership groups look at the ballpark as more than just 81 home dates, and look at the development around that and how [the ballpark] can be integral to creating a destination. I think that’s very important from a financial model standpoint.”

The behavior of fans has also changed.

“We are starting to blur the lines between social experiences, the kind of things you might do on a Friday night that don’t involve a sporting event and actually melding them with a sporting event,” Chambers said. “That may mean I’m not even in a seat. It could be a bar-like environment or a party deck. The idea of watching a game in a stagnant seat still applies to certain people, but baseball is starting to embrace the social nature of the game, the way play stops and starts so frequently.”

[Related: For Aspiring Performers, The NBA Is The Best Place To Be A Mascot]

It’s unclear how COVID-19 might affect behavior in the short term when fans are allowed back in ballparks. But baseball’s static nature — compared with, say, the free-flowing action of the NBA or English Premier League — lends itself to people more often getting up and out of their seats and moving around the ballpark. Globe Life Field has less capacity (40,300) than the Rangers’ previous home (48,114) — another trend in stadium design — in part to allow for its architects to create more common spaces for fans to socialize in.3

There are other advancements in Arlington, too. One of the primary complaints about the former Rangers’ ballpark was that there was no roof to shield fans from the summer heat of Texas. Former part owner and President George W. Bush and former team president Tom Schieffer wanted no roof. “[They] felt very strongly that baseball is an outdoor sport, and it’s meant to be played outside,” according to David M. Schwarz, who designed that ballpark. Matwick said this Rangers ownership group wanted a roof but for it to be less visually “heavy” than the other retractable roof stadiums.4 To reduce the height of the roof, Ortiz and HKS created a single-panel roof, a first in MLB stadium history. It also featured another MLB first: The center section of the roof is translucent, allowing natural light to filter in.

The newest park in baseball will offer a number of firsts. It will pull fans closer to the action. But it will also keep them further from nearby city centers, again departing from a key tenet of the retro era. For better or worse, this might be the beginning of a new era, a new standard, of ballparks.