Lost in the manic hustle of the trade deadline’s aftermath was some of the most significant news for the upcoming baseball offseason. Dave Dombrowski, the general manager of the Detroit Tigers since 2002, was fired from his post, becoming perhaps the most valuable free agent in baseball.

I say perhaps because valuing front-office employees is difficult. Their Baseball-Reference.com pages are filled with transactions, not stats, and a team’s record is such an imperfect measure of its talent that it’s hard to judge a GM by a season’s success. Seemingly well-built teams can fall apart because of injuries or bad luck, and poor teams can sneak deep into the playoffs on the basis of a few timely hits.

That’s why sabermetricians like to grade GMs by the skill of the players they acquire, not the number of pennants they’ve won. Recent research conducted by Lewie Pollis (formerly a student at Brown University, now employed by the Cleveland Indians) found that the best GMs can contribute MVP-level performances to their teams through savvy player acquisition.

Dombrowski is one of the best GMs no matter how you measure “best.” He grades out as the sixth-best GM in the time frame that Pollis examined (1995-2013). 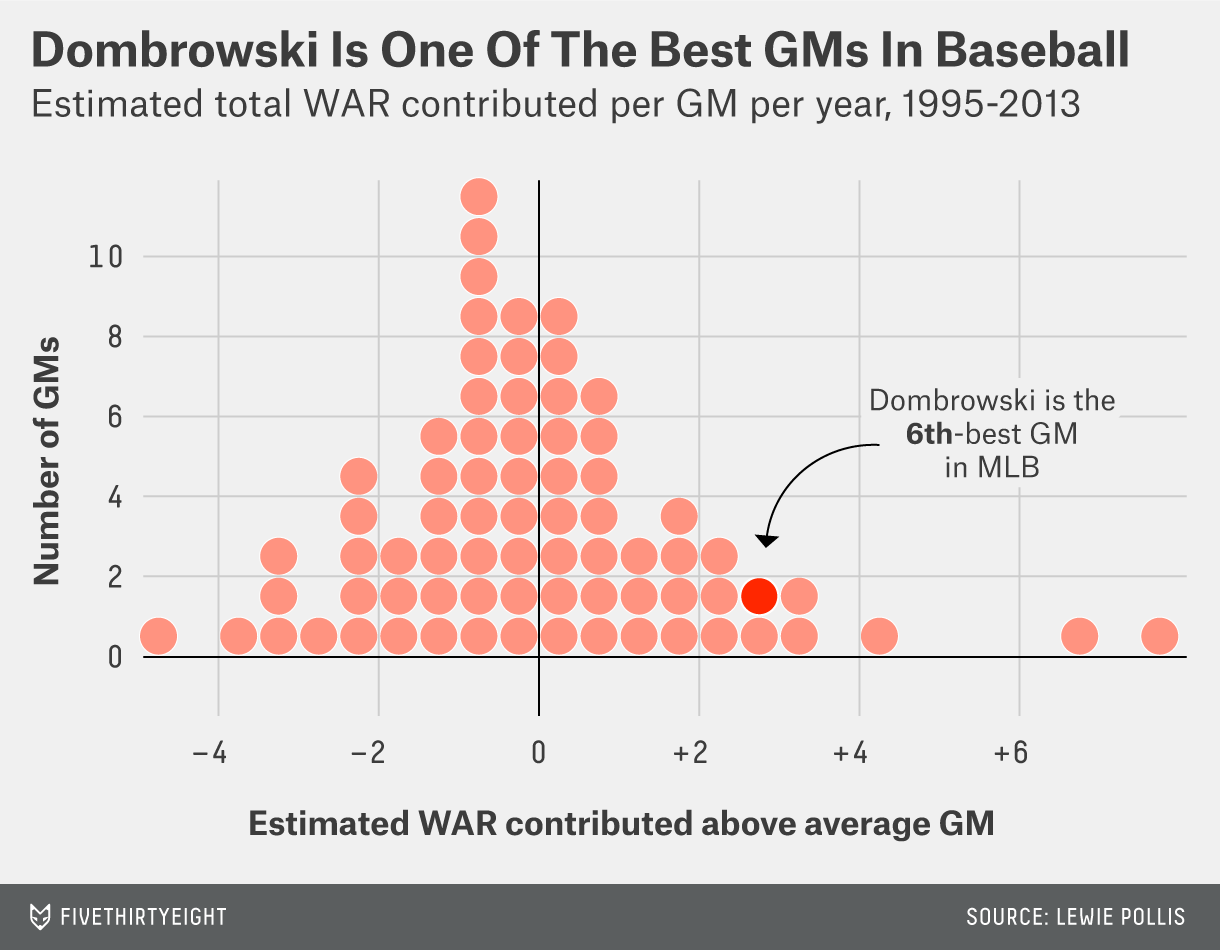 It’s important to note that although Pollis’s model produces a ranking of GMs, the purpose of the model was to estimate the total range of GM skill levels, not the individual effect of each GM. As such, it does not take into account the priorities of the ownership, the state of a team before a GM’s arrival,1 or the inevitable variance of player performance. Even so, when you combine the empirical rating with the subjective opinions of sources around baseball and the strong record of his teams, Dombrowski appears to be easily one of the top GMs in the game.

Pollis measured two facets of GM competence: free-agent signings and trades.2 Of course, GMs have many other duties, such as handling the media, developing players, and interfacing with the owners, none of which we can readily measure. These unexamined aspects of GM skill can only be gauged subjectively right now. Since Pollis’s model can’t take them into account, it suggests that, if anything, his estimates are conservative.

Dombrowski’s strength is in trading. The part of Pollis’s model that measures skill in trading says Dombrowski is one of the very best GMs in the league, and that fits with his reputation. Under Dombrowski, the Tigers made a series of deals that gathered many of the current team’s best players. Most famous among these trades is the swap that brought Miguel Cabrera from the Marlins for what looks in hindsight like very little (headlined by Cameron Maybin and Andrew Miller).

On the other hand, Dombrowski grades out as a little worse than average on free-agent signings. That is partially because of Detroit’s position as a large-market team, which makes it more able to afford the kind of marquee free-agent signings that, while not valuable on a per-dollar basis, can help provide reliable production. For this same reason, Dombrowski doesn’t grade out as well in other models that measure wins per dollar. Dombrowski also became, to some extent, a victim of his own success: By keeping the Tigers within reach of playoff contention, he kept them on the part of the win curve where it was most worth it to overpay for free agents.

Former Tigers first baseman Prince Fielder is a good example of Dombrowski’s skills, good and bad. Reportedly under pressure from Tigers owner Mike Illitch, Dombrowski signed Fielder to a mammoth nine-year deal worth $214 million. When Fielder immediately began to underperform, Dombrowski traded him to Texas for second baseman Ian Kinsler, who was able to contribute to the Tigers’ 2014 playoff run. Dombrowski rescued a poor free-agent signing with a smart trade that contributed substantially to his team’s chances to win at the time.

Pollis puts the worth of a very good GM at up to 7 or 8 wins per year.3 If Dombrowski is as good as a composite view of him suggests, then whichever team signs him will have upgraded itself just as much as if they had signed an MVP-level player. Best of all, because of the state of the current front-office-employee market, Dombrowski will cost notably less than any top free-agent player. If Andrew Friedman’s contract with the Dodgers is any indication, Dombrowski isn’t likely to receive a contract for more than about $10 million per year. That’s less than what Nick Markakis signed for with the Braves last year.

That kind of value dramatically exceeds anything a team could achieve by signing players. Current St. Louis Cardinals outfielder Jason Heyward is likely to be the best free agent on the market this offseason (if he doesn’t sign an extension first).4 Heyward is both good (3.5 wins above replacement this year) and young (26), which will entitle him to a contract near $200 million over 10 years. For an average annual payment of about $20 million, Heyward should provide something like four WAR to the lucky team that signs him. That’s about half the win contribution that a great GM can provide — and for twice as much money. Even if you take a more conservative view toward Dombrowski’s skills and halve his estimated value, he’s likely to provide as great a contribution as Heyward but for much less cash. And Dombrowski is far less likely than Heyward to be injured or suddenly decline.

Dombrowski is not without flaws, most notably his inability to construct even a halfway competent bullpen. But as the Tigers teams of the past decade have illustrated, even this problem has not prevented Dombrowski from building high-quality squads. It’s largely through bad luck and the variance of the playoffs that the small flaws in his teams’ bullpens snowballed into playoff losses.

The Tigers were looking at a long rebuild for a team that has become burdened by bad contracts, and perhaps that contributed to Ilitch’s decision to part ways with Dombrowski. But the Tigers’ loss is some other team’s great gain. Whoever hires Dombrowski will be signing a major contributor to the team’s fortunes on the field for a fraction of the cost that a comparable player would command.