Starting pitching tactics in baseball’s postseason, which starts today, often differ from those of the regular season. Because of the off days needed for travel between cities in a playoff series, pitchers typically enjoy more rest. That allows teams to lean on their best pitchers more than they can in the regular season. For instance, en route to a World Series championship last fall, the Washington Nationals’ top three starting pitchers — Max Scherzer, Stephen Strasburg and Patrick Corbin — started 13 of the team’s 17 postseason games. The three combined for 58.6 percent of the Nationals’ postseason innings, vs 40.5 percent during the regular season.

But this year, teams will not be able to avoid their weaker links as easily. Much of this season’s playoff games will be played at neutral bubble sites due to COVID-19 concerns. Teams, therefore, won’t travel as much, and so they won’t receive as many off days. In fact, there are no off days built into the wild-card round or the Division and League Championship Series.

Clubs will have to go deeper into their starting pitching rotations, which will likely help some teams and hurt others. Which teams could benefit, and which might be hurt? Let’s look at this question in a couple of different ways.

First, let’s use FiveThirtyEight’s pitcher ratings, which are based on rolling game scores.1 These scores try to predict how a pitcher will perform in a typical start; they’re not perfect — because of the shortened season this year, performance during the end of last year’s season still contributes to each pitcher’s rating — but they offer a good first cut at the question. We looked for teams that had at least one high-end, ace-type starter2 and depth — meaning four or more active starters with average-or-better rolling game scores. When examining MLB playoff rotations, there are clear haves and have nots.

In the American League field, the Cleveland Indians, Minnesota Twins and Tampa Bay Rays all appear to enjoy the greatest advantage from the playoff format, based on our criteria. 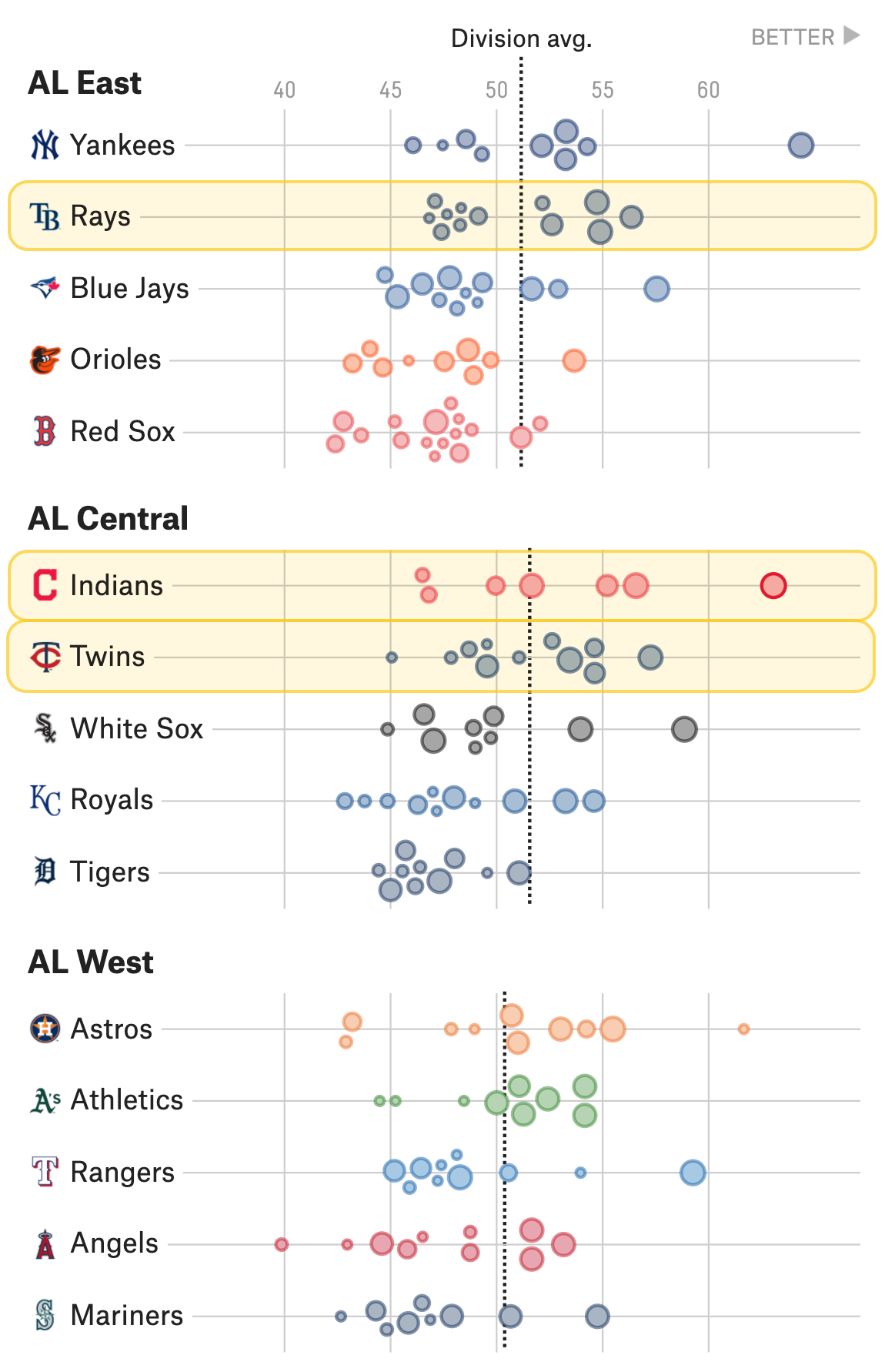 Cleveland is the only AL club with three starters boasting rolling game scores of 55 or better, including AL Cy Young — and perhaps MVP — candidate Shane Bieber, whose 63.1 rolling game score trails only New York Yankees ace Gerrit Cole in the AL. Behind Bieber are Carlos Carrasco, who has been among the best pitchers in the AL over the last 30 days, according to FanGraphs’ wins above replacement (WAR), and Zach Plesac, who had the 10th-best ERA among starting pitchers this season.3 Cleveland’s pitching juggernaut doesn’t stop there, as Aaron Civale ranks as one of the top No. 4 starting options in baseball, while rookie Triston McKenzie gives the Indians another league-average option.

The Rays have a top-end option in 2018 AL Cy Young winner Blake Snell and two near-elite options in Charlie Morton and Tyler Glasnow. (Among starting pitchers with at least 40 innings pitched, Glasnow trails only Bieber and Jacob deGrom in strikeout percentage.) And though the Rays lost a quality option in Yonny Chirinos to Tommy John surgery, they still have Ryan Yarbrough, one of the better fourth options in the game.

The Twins’ offseason acquisition of Kenta Maeda, meanwhile, has yielded great returns, as he’s employed his elite split-changeup to rank third among AL pitchers in WAR. The Twins have allowed him to work deeper into games, while his former club, the Los Angeles Dodgers, approached his workload cautiously and curiously (transitioning him into the bullpen late in recent seasons). He will get a chance to start this postseason. Maeda is backed by four good-if-not-great arms, including Michael Pineda, who has been among the top pitchers in the game over the last month. The Rays and Twins also have two of the best bullpens in the AL, sporting the best and second-best relief units by WAR.

Other teams shouldn’t be penalized too sharply by having to go deeper into their starting rotations. The Yankees, for example, have one of the top arms in Cole, whom they signed to a record contract in the winter, and three quality starters behind him. But James Paxton, who they hoped would be a co-ace, has again landed on the injured list. The Astros have lost their best pitcher, Justin Verlander, who is out for the season, but their five active starting pitchers all rate as above-average arms, according to our ratings. (More on the Astros in a bit.)

What about AL teams that could face uphill challenges due to the format change? According to our ratings, the Blue Jays and White Sox only have three and two starting pitchers, respectively, who have rolling game scores above 50. While each team has an ace-caliber option in Hyun Jin Ryu and Lucas Giolito, each also lacks depth. The Oakland A’s have the opposite problem: They have five starting pitchers performing at average or better rates, but not one with a rolling game score of 55 or greater.

In the NL, the Dodgers and Cincinnati Reds stand out as clubs with the rotations best suited to take advantage of this fall’s format. Each has multiple elite starters and depth. (The San Diego Padres did too, but we’ll get to them in a second.) 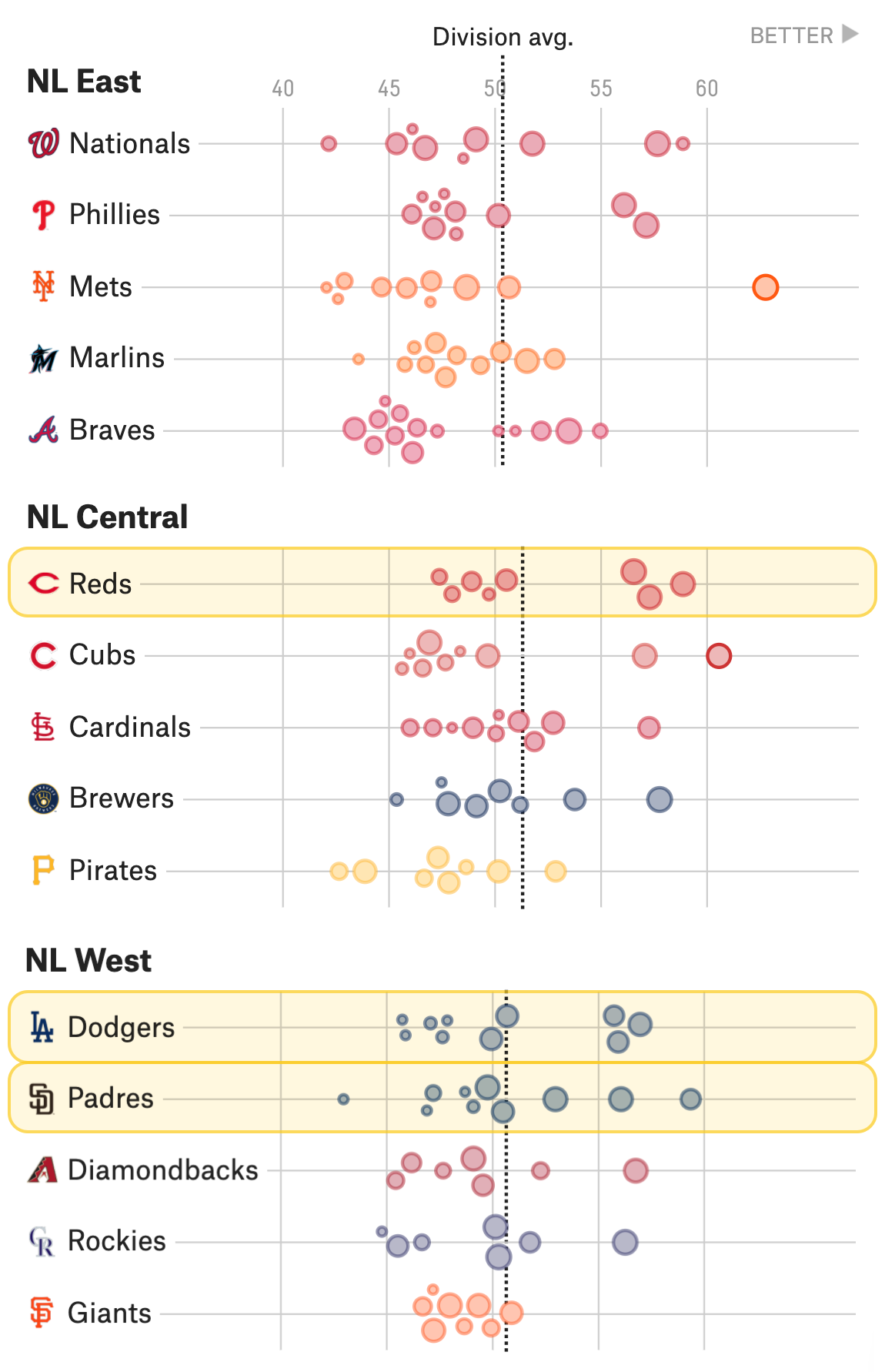 The Dodgers have three pitchers with rolling game scores of 55 or better: Clayton Kershaw, Walker Buehler and rookie Tony Gonsolin. In total, the Dodgers have five average-or-better starting pitchers, including Dustin May, their fifth-ranking arm, whose fastball averages 99 mph, tops in the majors. Yep. That’s L.A.’s fifth-best option.4

The Reds rank second only to Cleveland in FanGraphs’s starting pitching WAR this season. They are led by NL Cy Young contender Trevor Bauer, who has a 58.9 rolling game score, with Sonny Gray (57.2) and Luis Castillo (56.7) just behind him. The Dodgers are the only other playoff team with three pitchers with scores of 56 or better. The Reds have a fourth above-average arm in Tyler Mahle. The Cardinals don’t have multiple aces but they do have one in Jack Flaherty, who is backed by a deep rotation.

Just days ago the Padres looked to have an excellent staff for October, but they’ve recently run into some poor luck on the injury front. The Padres attempted to improve their World Series chances by acquiring top pitching talent Mike Clevinger from Cleveland prior to the trade deadline. But Clevinger was pulled from his start on Sept. 23 after one inning due to tightness in his right biceps. The club hoped he would team up with breakout star Dinelson Lamet to give the Padres two potential difference-making arms in the playoffs, backed by two other pitchers (Zach Davies and Garrett Richards) who have been above-average this year. But not only is Clevinger’s status in doubt, Lamet also left his start on Sept. 25 due to biceps tightness, though the team is optimistic he can make his first playoff start.

NL Teams that might not care for the new format include the Miami Marlins, who have just three pitchers who rank average or better according to our ratings (though one of them, rookie Sixto Sanchez, has the talent to dominate in any start). The Braves, meanwhile, already had starting pitching questions before an injury to Cole Hamels. They now have just two healthy pitchers (Max Fried and Ian Anderson) with better-than-average ratings. The Chicago Cubs and Milwaukee Brewers have strong options at the top of their rotation in Yu Darvish and Corbin Burnes, respectively — but Burnes, one of the most improved pitchers in the game, is out for the wild-card round of the playoffs and, should the Brewers advance, doubtful for the divisional round with an oblique strain. The Cubs have only two pitchers (Darvish and Kyle Hendricks) performing at average-or-better levels, and the Brewers have three. That might have been OK a year ago with more off days, but it makes a run in this year’s condensed playoff schedule more difficult.

Again, since our pitcher ratings have certain limitations, let’s also gauge each playoff club’s depth according to WAR.

Just as they did in FiveThirtyEight’s rolling pitcher game scores, the Indians and Reds stand out with talented and deep rotations per FanGraphs’ WAR. Cincinnati and Cleveland rank first and second, respectively, in average WAR per starting pitcher among four-man rotations.

If clubs are faced with lengthy series and no off days, they could elect to pitch starters on short rest as teams sometimes do in the postseason, or even throw bullpen games — efforts cobbled together by relievers. Starting pitchers don’t often pitch on less than the typical four days between starts, but when they do, their performance tends to decline. That was true last regular season and again this season.

However, the Cubs and Astros — even without Verlander — are the fourth- and fifth-best positioned staffs when looking at average WAR of a team’s top four pitchers, while the Rays, who look formidable in terms of rolling game scores, rank near the bottom half of that measure. While the Astros lost their star pitcher, their No. 4 and No. 5 options — Lance McCullers and Framber Valdez — have combined for 2.9 WAR. And though the Cubs lack the Astros’ depth, Darvish and Hendricks are a formidable one-two combo in a playoff series, having combined for 4.9 WAR in the regular season.

There may never be another playoff schedule quite like this one. So it’s hard to say exactly how the condensed schedule and lack of travel will affect different teams. But teams with deeper starting pitching staffs — and bona fide aces — should start with an advantage.