As he returned home to New Mexico last winter, Mitch Garver knew he had to be better. In 2018, Garver ranked 110th out of 117 qualifying catchers in fielding runs above average. As a catcher, that meant he struggled mightily with pitch framing1 — the skill of a catcher to receive borderline pitches in a way that allows them to get favorable called strikes.

Garver turned 28 in January. He had been only a league-average hitter at the plate and a liability behind it. He knew that if he couldn’t receive the ball better, his career would be in jeopardy. He had heard that a coach hired the previous season was working miracles with the Twins’ minor league catchers. So Garver called Tanner Swanson and invited him to Albuquerque.

The Twins have surprised MLB with their offense this year, with a record five batters — including Garver — hitting 30 home runs as the team broke the single-season home run record in August.2 Minnesota is the only major league team with four position players among the top 35 qualifiers in year-to-year gains of wins above replacement. Among those Twins, Garver is the most improved, and he’s the seventh-most-improved player in all of baseball. 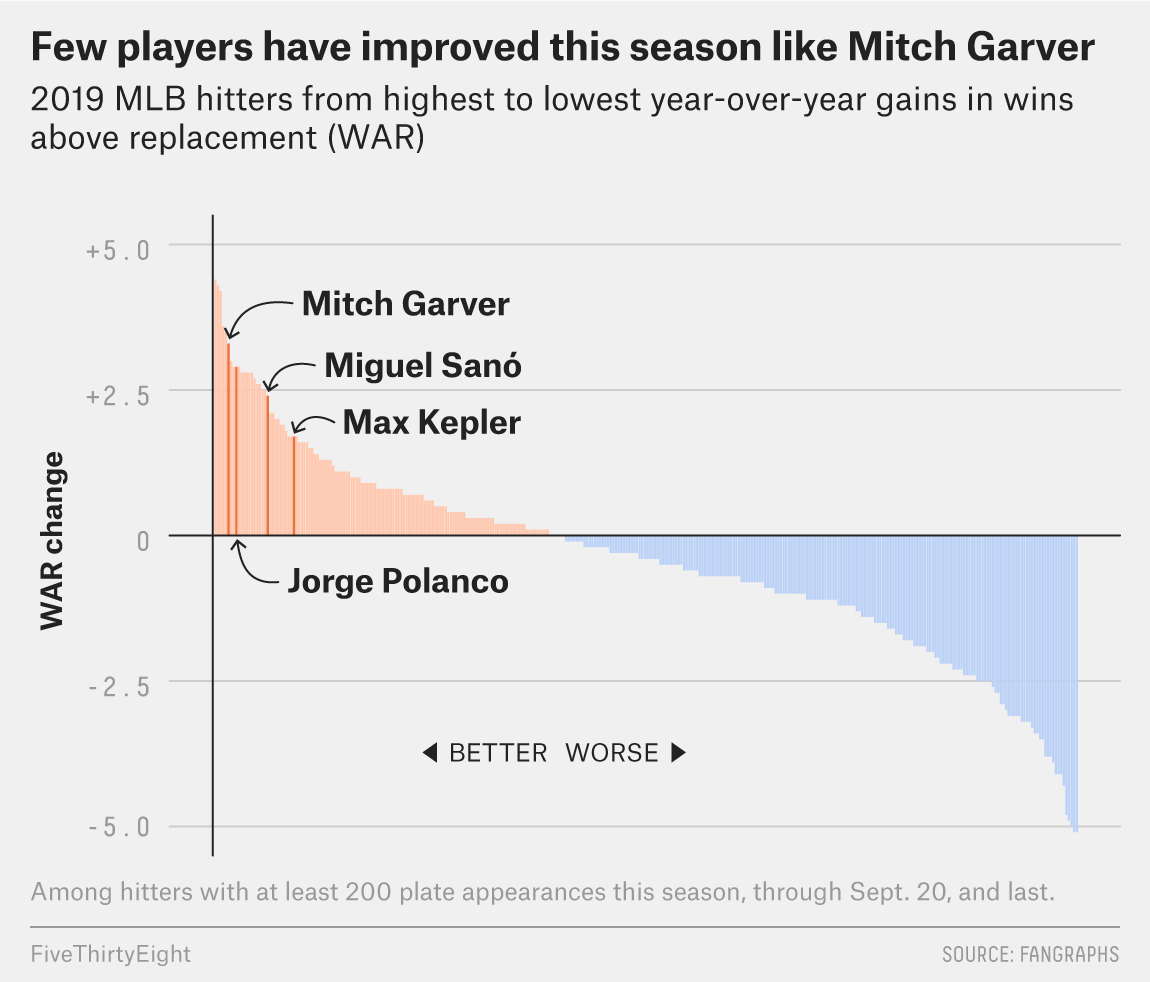 But Garver’s improvement with his glove has been just as dramatic as his work with his bat. This season, Garver has been worth 4.4 fielding runs above average, achieving the fifth-greatest improvement in the metric.3 Per plate appearance, his performance in wins above replacement, which includes framing value, ranks as the eighth-best mark in baseball.

The growth with his glove is where Swanson comes in. Swanson never played catcher in college, nor had he coached professionally when he joined the Twins organization in late 2017. But he spent six years working with college catchers at the University of Washington and Santa Clara University, and he attracted the attention of Jeremy Zoll, the Twins’ director of minor league operations, after a presentation Swanson gave at a catching coaching clinic.

“I kind of had a clean slate to look at it objectively. I didn’t carry all these biases — ‘Well, this is how I used to do it. This is how I was taught,’” Swanson said. “I think a lot of times as coaches, we have these drill packages that we’ve compiled and we don’t truly understand the ‘why’ or question whether a particular drill leads to improvement.”

Since the late 2000s, when analysts first quantified the value of pitch framing, more teams have started to prize catchers who can get more favorable calls for their pitchers. After all, every pitch matters: The difference in batting average on a 2-1 count and a 1-2 count is 178 points this season. Teams began paying for the skill. In 2016, the Twins were graded as the fifth-worst framing team in baseball. One of Derek Falvey’s first acquisitions after being hired as GM late in 2016 was signing pitch-framer extraordinaire Jason Castro. But Swanson believed that framing was not only an innate gift — it could be taught.

Swanson employed drills using weighted balls, implements typically reserved for pitchers, to help Twins catchers improve their hand speed and movement patterns. “You’re dealing with timing and getting the ball from point A to B. The faster we can do that the more deceptive we are,” Swanson said. “I don’t want to say fool umpires but [rather] to influence them to call borderline pitches as strikes. That’s their primary job.”

Going into this season, Garver graded as a poor receiver on balls in the lower part of the strike zone and below. Swanson said that’s a problem in today’s game, with record rates of breaking balls and changeups — pitches that typically either cross low in the zone or below it.

“A lot of times with those big-depth breaking balls, those sliders that sweep across the front of the zone, they go in and out of the zone,” Garver said. “They are very hard to catch. You have to learn how to catch them properly. I wanted to get underneath the ball when I’m receiving it.”

The most conspicuous change Swanson suggested Garver make was employing a variety of one-knee, Tony Peña-style stances, which had gone out of fashion in the professional game. Going lower, Swanson reasoned, would help a catcher get more favorable calls on lower pitches. “We didn’t invent the one-knee setup,” he said. “But those were traditionally done with nobody on base and less than two strikes.”

When runners are on base, catchers are taught to go to what Swanson calls a “secondary” stance, sitting higher to position themselves better for throwing out a runner or blocking a ball in the dirt. What Swanson proposed was going to a knee on all counts, even if it adversely affected the ability to throw or block balls.

Since the value of framing is tied to compelling borderline pitches to be called as strikes, FiveThirtyEight examined available Statcast data on called strikes and balls on the edge of the strike zone and the zones just off the plate. The data shows that catchers do receive less favorable calls when runners are on base. That was true of the Twins, too, until this year, when the one-knee stance came to Minnesota. 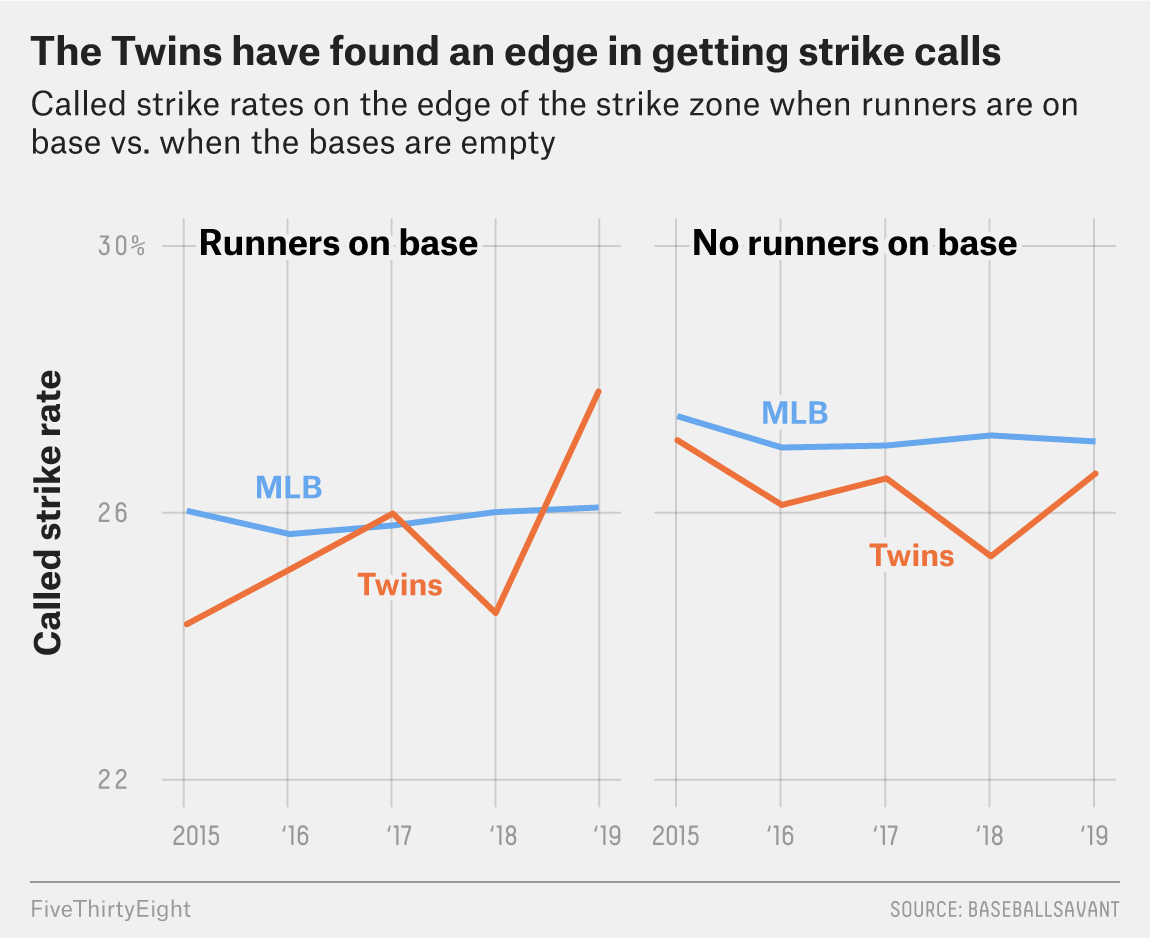 The Twins rank 12th in the majors in pitch framing this season, and Garver is up to 23rd out of 110 catchers. He has used his new stance to better “absorb” borderline pitches, and his frequency of called strikes caught has become more concentrated in the lower zone.

“[Garver] deserves the credit. His desire to improve didn’t stop once he got to the big leagues,” Swanson said. After all, Swanson notes, “He called me.”