Missouri’s Kit Bond, in a move that was not entirely unexpected, announced today that he will retire from the Senate after 2010. Bond joins Kansas’ Sam Brownback and Florida’s Mel Martinez as other retiring Republicans; these things can sometimes come in waves when a party is having a rough year. Democrats have significant opportunities in all three states, although the Kansas one is probably contingent on Kathleen Sebelius running.

Off-hand, indeed, it appears that the Democrats might be slightly favored in this race because of the potential candidacy of Robin Carnahan, the popular Secretary of State from the dynastic Carnahan family who won re-election with 62 percent of the vote in November. The Republican field, by contrast, is a bit less clear. Chris Cillizza speculates that former Senator Jim Talent, who lost to Claire McCaskill in 2006, may be their leading candidate. My reaction to that is that having a guy who lost his last race at the top of your list is usually not an indicator of a terrific bench, although Talent’s loss was close and came in a very Demcoratic year.

We can also look toward Missouri’s Congressional Delegation for potential candidates; it presently contains 5 Republicans and 4 Democrats. One very basic indicator of strength that I like to look at is to compare a Congressman’s performance in his last election against that predicted by the partisan makeup of his district. For instnace, Todd Akin just won re-election with 63.8 percent of the two-way vote in a district with a PVI of Republican +9. On average, we’d have expected the Republican to have 56.2 percent of the vote in an R+9 district in 2008 (as determined by regression analysis), meaning that Akin overperformed his projection by 7.6 points, a roughly average score for a candidate winning his election. The power rankings for each of Missouri’s nine Congressmen are below: 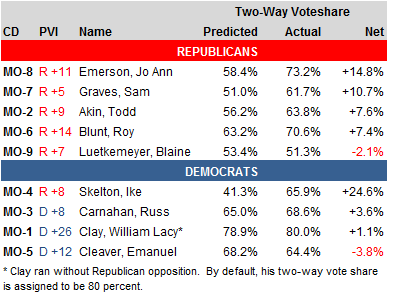 The most impressive performance among the Republicans came from MO-8’s Jo Ann Emerson, who won overwhelmingly in a district that is solidly but not incredibly Republican. Emerson, who was reportedly considering a bid for governor in 2008, is somewhat moderate on issues like stem cell research, perhaps making her more appealing to voters in swing areas like the Kansas City suburbs.

Roy Blunt, the Republican Whip in the 110th Congress, may also consider a bid. He too won re-election easily, although since his district is more strongly Republican than Emerson’s, his performance was a bit less impressive. It’s also unclear whether having held a position in the House leadership would be an asset or a liability to his candidacy.

On the Democratic side, Blue Dog Ike Skeleton would theoretically be an interesting candidate — but only theoretically, as he’s 77 years old. Otherwise, there is nobody who jumps out as obviously having more upside than Robin Carnahan, including her brother Russ.