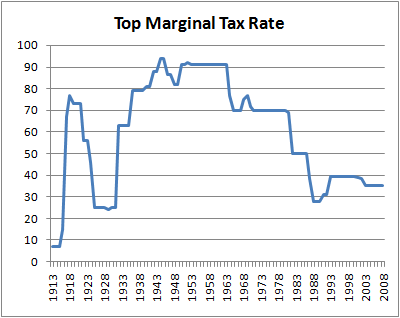 What the discussion over the top marginal tax rate ignores, however (and what Ygelsias picks up upon) is that this rate has been assessed at very different thresholds of income. In 1940, for example, the top marginal tax rate was 81.1 percent — but this rate only kicked in once you made $5,000,000 or more in income, which is equivalent to about $75,000,000 in today’s dollars. 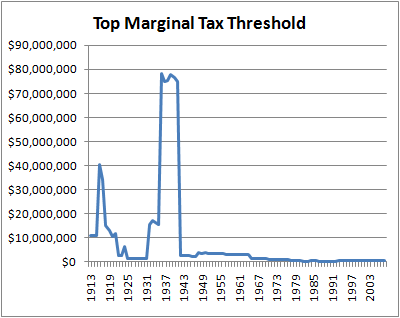 Needless to say, these are much more dramatic differences — more than a thousandfold at various points in our history — than we’ve observed in the progress of top tax rate. They’re so large, in fact, that we need to plot them on a logarithmic scale to get a better handle on things: 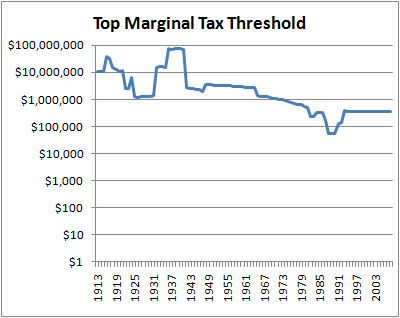 The median top income tax threshold since 1913 — adjusted for today’s dollars — is a little over $1.3 million, almost four times higher than it is now. This is one thing that advocates of more progressive taxation (of which I am one) need to keep in mind: although the top tax rates have been much higher throughout much of the country’s history, they also kicked in at much higher thresholds of income than the ones we see today.

The question, of course, is why there isn’t a millionaires tax bracket now … or even a multi-millionaires tax bracket. I haven’t run the numbers, but I’m guessing that if you established a new tax bracket at, say, 40.5 percent, that started at incomes of $1,000,000 or more, this would bring in as much revenue to the government as restoring the $250K tax bracket (which is really $360K now given indexing to inflation) to 39.6 percent, as it was under Clinton.

And I think Yglesias is also right that the politics of this might play out even better for Obama (although, to be clear, a recent NBC/WSJ journal says that most Americans favor a repeal of the Bush tax cuts). I don’t really feel a tremendous amount of sympathy for those in the $250,000 to $999,999 income bracket. (It’s tough to raise a family of five in Manhattan on $250K per year? Then don’t live in Manhattan). But I suspect a fairly large fraction of Americans have either a friend, family member, or immediate supervisor who makes that sort of money, and might still consider them to be within the broad definition of “middle class”. Or they have some reasonable hope of someday making that amount themselves: I’ve heard it said before that people tend to define “rich” as someone making four times as much as themselves, and there are certainly quite a few American households who make at least $62,500 per year (one quarter of $250K).

Not very many people, however, are good acquaintances with a million-dollar income earner, and in a great many industries it is impossible to even imagine making that sort of money no matter how far one advances. Using the 4x rule that I described above, about 70 percent of the country would consider $250K to be “rich”, but 98 percent would describe a million dollar income that way. And when you ask people whether they think the “rich” should be paying more taxes, the response is overwhelmingly that they should be … about 66 percent of Americans think that “upper-income people” pay too little in taxes, versus just 9 percent who say they pay too much.

To be clear, this is not necessarily intended as an argument against raising taxes at the $250,000 level, or some other sub-million dollar threshold of income. I’m merely stipulating that if that if the conversation stops at that point, we aren’t really using all the tools at our disposal to craft socially and economically optimal tax policy.