Mike Trout and Bryce Harper, by consensus the most talented young position players in baseball, are facing off this week for the first time in their burgeoning careers. (Trout’s Los Angeles Angels of Anaheim got the best of Harper’s Washington Nationals on Monday night, 4-2.)

Few youngsters arrived in the majors with as much buildup as Harper, who graced the cover of Sports Illustrated at age 16. Luckily for the Nationals, he’s mostly been as good as advertised (and he’s still just 21 years old, a fact that’s often forgotten because he’s been so good). Meanwhile, all Trout did in his first full pair of major-league seasons was turn in two of the 150 or so best position-player seasons in the past 113 years of baseball, making two strong MVP bids in the process.

So, yeah, these guys have been really good, really early in their careers.

With all the (deserved) hype surrounding Trout and Harper, I was wondering how the duo compares to other concurrent 22-or-under pairs of position players in the history of baseball. To answer that question, I looked at the most productive two non-pitchers age 22 or below in a given season, based on the combined number of wins above replacement they’d generated in the previous two seasons. (We can’t compare Trout/Harper through age 22 because we don’t know what they’ll do in 2014.)

By that standard, Trout and Harper are the most productive young duo in baseball history. Here were the seasons featuring the best pairs of budding superstars ever (taking only the best score for duplicate pairs): 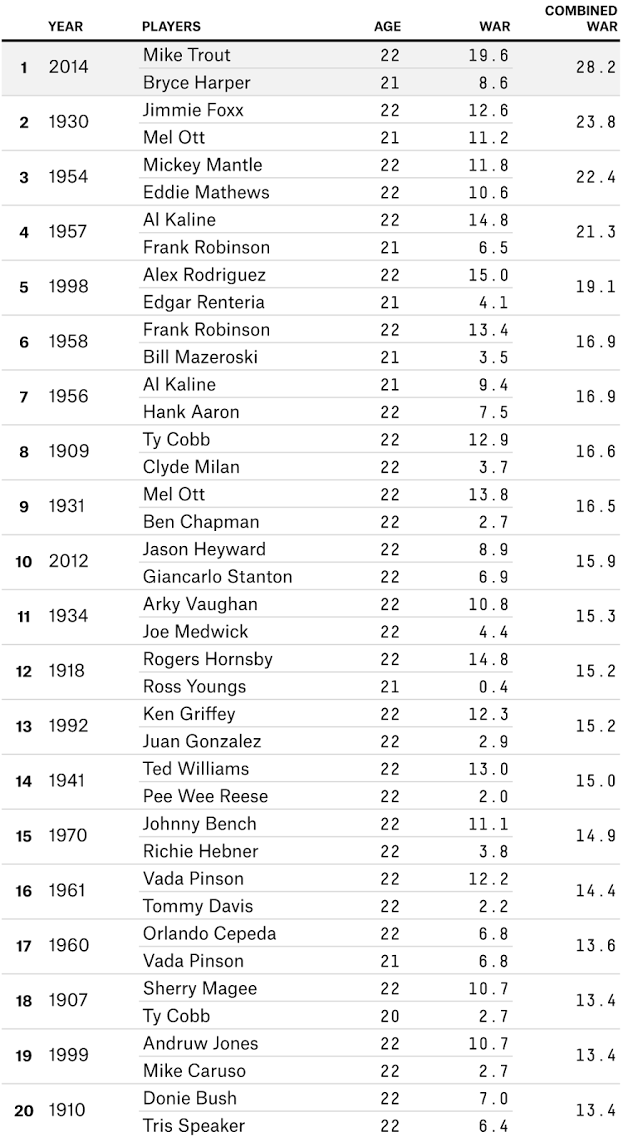 The majority of those 28.2 combined WAR belong to Trout, author of the aforementioned pair of historically dominant campaigns. Let’s be honest, though: Given Trout’s otherworldly production at such a young age, we could pair him with just about anybody and he’d still be near the top of this list (Trout by himself would rank fifth). But Harper’s numbers to date hardly make him a coattail-rider. As far as No. 2s go, Harper’s 8.6 WAR ranks below only Mel Ott and Eddie Mathews as the third-best second fiddle in the history of promising under-22 duos.

If we’re looking to give extra weight to No. 2s, ensuring that both players in a pair have great stats (to safeguard against a situation such as what happened in 1918, when Rogers Hornsby had 97 percent of the WAR in his “duo” with Ross Youngs), perhaps a better way to rank these kinds of pairings is not to sum up all of the WAR generated by a pair, but rather to take the harmonic mean of the two individuals’ WAR totals. If we do that, the following list emerges: 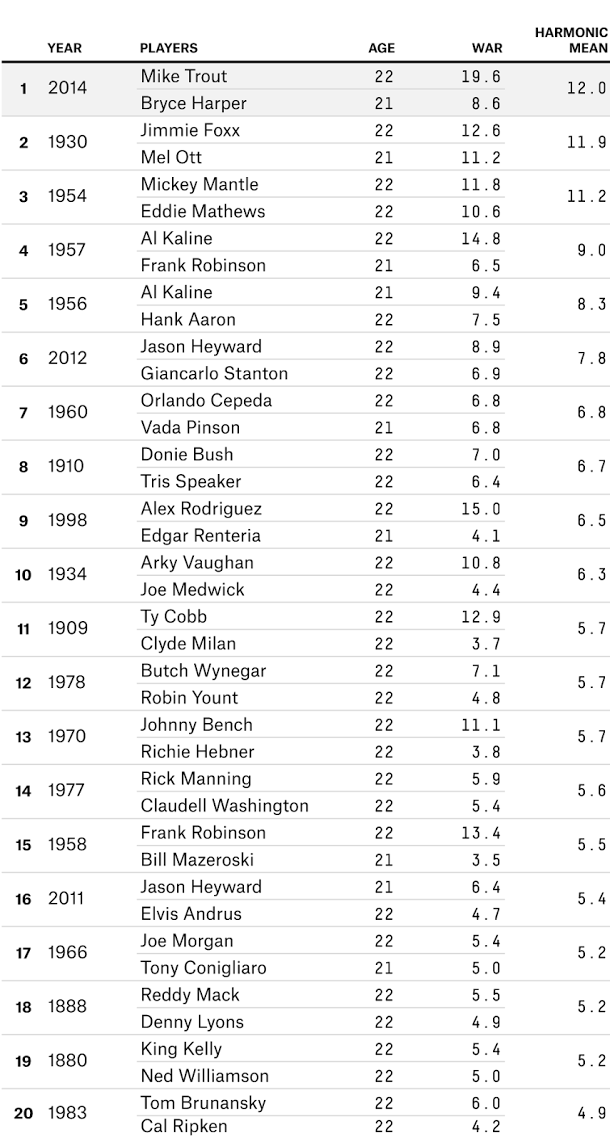 By either list, though, Trout-Harper is the best young duo in baseball history. So, savor their matchup this week — you may never again see a pair of position players so good face off at such a young age.