On Sunday night, the Dallas Cowboys fired head coach Jason Garrett after years of failing to win in the postseason despite having a quality quarterback, offensive line and skill-position talent for most of his tenure.

The former Green Bay Packers head coach has an impressive resume: Nine playoff appearances in 13 seasons, a Super Bowl championship and a career 61.8 winning percentage (tied with Andy Reid for fourth-best among active coaches). A successful skipper whose “message had become stale,” according to Packers CEO Mark Murphy, McCarthy seems like the perfect candidate to learn from his own mistakes and serve as an upgrade over his Dallas predecessor.

One problem: McCarthy’s mistakes were the same ones Garrett kept making.

Garrett’s perceived lack of aggressiveness on fourth-down go-for-it calls was a major talking point during his last season in Dallas — just as it was for McCarthy in his final year in Green Bay. In fact, McCarthy’s decision-making in the 2014 NFC championship game may have squandered his team’s best shot to win a second Super Bowl in his tenure.

When it comes to launching successful challenges of officials’ calls, McCarthy has been slightly worse than Garrett. McCarthy is 47-of-93 over his career (.505), per Pro-Football-Reference.com, compared with Garrett’s 24-of-45 (.533). McCarthy didn’t seem to figure out that he wasn’t great at it, either; he challenged over twice as many plays as Garrett in just 52 more games (34 percent more).

Coaches are often evaluated by whether they squeeze the most out of their talent (for example, Bill Belichick has won AP Coach of the Year only three times during the most dominant 20-year run in the history of professional football). On that front, Garrett and McCarthy both get notoriously low marks. In December, former Cowboys All-Pro receiver Dez Bryant went viral by pointedly agreeing with a tweet about Garrett wasting Bryant’s career (and that of many other star Cowboys, like quarterback Tony Romo). A little over a year earlier, FiveThirtyEight’s Neil Paine looked into whether McCarthy had wasted All-Pro quarterback Aaron Rodgers, too. The answer is not “no”!

But we can look even deeper at how well the two coaches’ teams have stacked up. Both coaches had MVP-level quarterbacks at their disposal — Garrett with Dak Prescott and McCarthy with Rodgers — as well as well-regarded offensive lines and Pro Bowl-level skill-position players. Furthermore, they’re both offensive coaches who have led only one team; moreover, they coached at the same time. All of this suggests that direct statistical comparisons have some relevance here.

McCarthy’s Packers averaged better NFL ranks in win-loss percentage, turnover margin and point differential than Garrett’s Cowboys did. Offensively, the Packers averaged a top-10 (and better-than-the-Cowboys) finish in yardage gained, points scored and giveaways under McCarthy. It’s a similar story with passing offense: better, almost across the board. In theory, if McCarthy can get better offensive production out of the Cowboys’ talent, it won’t be as crucial for him to improve on Garrett’s game-management shortcomings.

One problem with that theory: The 2019 Cowboys had the most productive offense in the NFL.

Under first-time offensive coordinator Kellen Moore, the Cowboys led the NFL in offensive yardage and finished sixth in points scored. Moreover, at the time of this writing, ESPN was reporting that Moore was expected to accept McCarthy’s offer to stay on as offensive coordinator, maintaining continuity.

So if there’s continuity on an already-excellent offense, how can McCarthy improve? That’s a question McCarthy has reportedly been asking himself since he got fired during the 2018 season. In fact, McCarthy seems to have put himself through an analytics boot camp, using his season away from the game to get familiar with the kind of arm’s-length analysis that powers smarter on-field decisions.

“Analytics was growing the last few years I was in Green Bay, that is something that can go to another level,” McCarthy recently told NBC Sports’s Peter King. “Analytics is how I got into the league as a quality control coach. It’s all about the application of the data from statistics. The third-party analytics in our business are better than ever.”

Pro Football Focus founder and COO Neil Hornsby vouched for McCarthy’s efforts to familiarize himself, tweeting that McCarthy and his “team” spent a day in September at the PFF offices, getting familiar with the state-of-the-art in statistics.

Yes, his team. McCarthy told King that he and a group of fellow out-of-work NFL coaches set up shop in a “huge refurbished barn” where they crammed film and dissected the latest schematic trends. The experience helped McCarthy envision a “14-person Football Technology Department,” including an eight-person analytics team. There’s no word yet on whether Cowboys owner Jerry Jones is willing to underwrite this vision, but it’s an ambitious idea nonetheless.

However, many NFL observers are skeptical — including former Packers beat writer Greg Bedard, now with the Las Vegas Review-Journal. “McCarthy said that? LOL,” Bedard tweeted in response to the report of McCarthy’s analytics-department concept. “Now ask if he’s actually going to listen to anyone. That answer would be no.”

So how can Cowboys fans trust that an old dog like McCarthy can learn new tricks? Turns out, he already has — in his old, oft-maligned position as the Packers’ head coach.

I reached out to Football Outsiders founder Aaron Schatz to see how McCarthy stacked up in the site’s Aggressiveness Index — a statistic comparing coaches’ fourth-down decision-making. 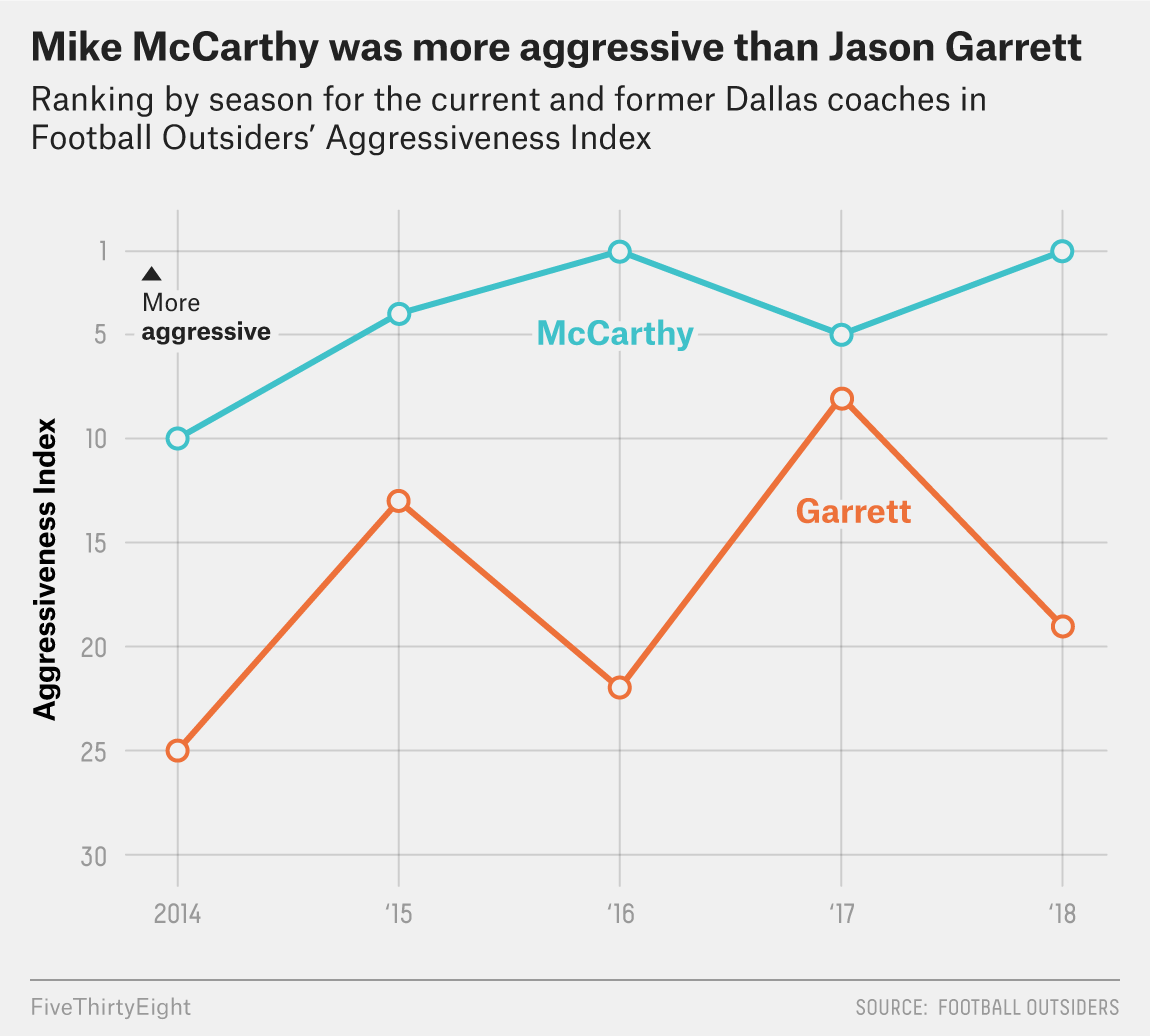 “He tended to be very conservative when it came to running out [the] clock too early in games,” Schatz told me, “but aggressive on fourth downs.” In fact, over McCarthy’s last five seasons in Green Bay, he was consistently one of the most aggressive play-callers in the NFL — and significantly moreso than Garrett.

How did McCarthy get so much better at situational awareness? It might be because he “got away from” focusing on midweek X-and-O gameplanning, as he told King, and instead focused on “staff development.” This is supposed to be the job of head coach: Don’t micromanage every aspect of the game plan, but coach the coaches. It may be that his stale offensive game plans were a direct result of trying to level up as an overall strategist.

Whether McCarthy decides to offload the situational decision-making to a lab full of football scientists or the offensive game planning to Moore so he can make optimal calls, he’s set himself up to perform much better in his — and Garrett’s — weakest areas.