Take a look at this comment from Mike Huckabee’s interview yesterday with the Visalia (CA) Times-Delta: 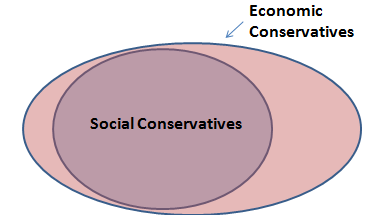 So the equilibrium strategy under Huckabee’s model is probably to adopt an economically conservative, but socially moderate message. Sure, the social conservatives might not be particularly happy about this state of affairs — but unless they wanted to form a third party, they wouldn’t have anywhere else to go. (For reasons that we will leave as an exercise to the reader, it wouldn’t make sense for the Democrats to adopt a socially conservative, economically liberal platform under this scenario.)

The GOP’s real problem, of course, is that there is far from perfect overlap between social conservatives and economic conservatives. You probably have something like this:

The base voters are the ones that are both economically and socially conservative; these are ~25 percent of voters the that still identify as Republican. However, whereas during 1994-2004, the Republicans seemed to be winning many or most swing voters who were either economically conservative or socially but not both, they now seem to be losing much of both groups.

In November, for instance, Obama won 43 percent of voters who attended church on an at-least-weekly basis. Considering that many of the 57 percent of such voters he didn’t win were probably also economic conservatives, that suggests that Obama won a majority of voters who are socially conservative but economically liberal — particularly African-American and Latino voters, who often fit this description.

Obama also, however, won a majority of voters making $200,000 or more, who as a group can be presumed to be fiscally conservative but socially liberal.

We should also mention the importance of the War on Terror to the GOP’s successes in the 2002 midterms and the 2004 Presidential election. In 2004, 19 percent of voters described terrorism as their most important issue, and 86 percent of such voters picked George W. Bush (this was more than enough to outweigh the gains that John Kerry made on Iraq). By comparison, only 9 percent of voters described terrorism as the most important issue in 2008 (86 percent of them voted for John McCain). That change alone accounts for a drop of about 7 percent in the GOP’s margins. 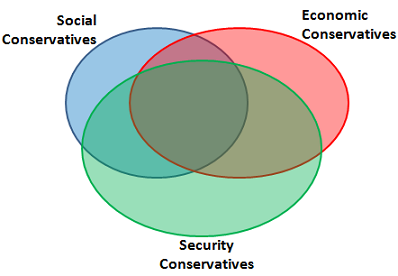 The irony of all of this is that Huckabee’s greatest appeal is probably to economically moderate (or even liberal), but socially conservative voters, precisely the sorts of voters that he says don’t exist. But these voters do exist, and the GOP’s medium-term choice is probably in picking between them (which, FWIW, probably requires their making significant into the Hispanic and perhaps even African-American communities) and their alter egos, which are fiscally conservative but socially moderate, libertarianish voters. Right now, however, the GOP’s messaging is so haphazard that they are probably losing majorities of both groups.