The deadliest migrant passage in the world has claimed hundreds of new victims. A fishing boat carrying a reported 700 to 900 people across the Mediterranean from Africa to Italy capsized on Sunday, and less than 10 percent of the passengers have been found alive. This is the second disastrous sinking in a week: On April 12, another 400 refugees drowned in a separate shipwreck and 144 were rescued. And on Monday, a third ship capsized near Greece with at least 90 people on board. There are no estimates of casualties yet.

The International Organization for Migration estimates that Sunday’s capsizing will bring the total number of deaths this year to 1,500. Last year was the deadliest to date for Mediterranean crossings; 3,072 migrants perished between January and September. If the pace of fatalities doesn’t slow, this year is likely to set a new record, especially because summer, the peak season for attempted crossings, has not yet begun.

The surviving migrants will wind up on Lampedusa, an Italian island-turned-refugee camp, which is quickly becoming as overcrowded as the sunken ships. Italy and Malta have borne the brunt of the influx of refugees crossing the Mediterranean. Malta, a small archipelago, lies just 180 miles from Tunisia. Lampedusa is about the same distance from Libya, which is the point of origin of many refugee-laden ships.

The European Union requires that asylum petitions are processed by whichever member nation a refugee first arrives in, so Malta and Italy, positioned at the front line, have seen a surge of applications relative to the rest of Europe. 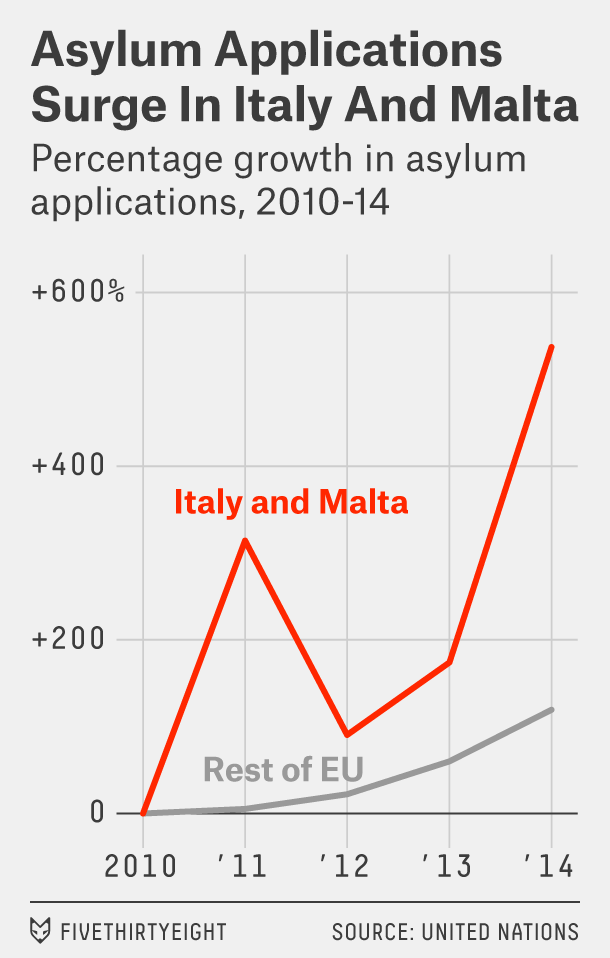 As the number of refugees increases, fatalities are likely to increase as well, especially if government spending on search-and-rescue missions continues to be limited. Italy began special patrols (known as Operation Mare Nostrum) to find and save migrants in October 2013, after nearly 400 migrants died in a shipwreck near Lampedusa. Rather than bear the costs alone, Italy ended the program a year later, turning over patrols to a new EU mission (called Operation Triton) that watches over a smaller patch of sea and operates with one-third of the previous budget.

This month’s disasters may prompt the EU to re-examine the way it conducts Operation Triton, but the bigger crisis could come if Italy decides it is unwilling or (due to crowding) unable to continue being the sole drop-off point for the people Operation Triton finds.

For now, the peril faced by the Mediterranean refugees supersedes bureaucratic concerns. The barely seaworthy boats compel aid, and a drowning person often must be returned to land to receive medical treatment.

When countries confront refugees that aren’t in mortal danger, they’ve found ways to avoid allowing migrants to land and file asylum pleas. In 2013, Australia set up new patrols to intercept boats of refugees arriving from Indonesia and to tow them to Papua New Guinea so that asylum claims would be processed there, instead of in Australia. The Prime Minister at the time, Kevin Rudd, declared that people who approach Australia by sea without visas would be barred from ever settling in the country, even if they are genuine refugees.

Australia’s policy is a more extreme version of the “Wet Foot, Dry Foot” approach the United States implemented in the 1990s regarding Cuban refugees. Cubans who made it to land could stay in the United States and were eligible to apply for legal residency. Those who were intercepted at sea were either returned to Cuba or diverted to some third country, forcing the Coast Guard to balance the goal of rescuing migrants in danger with the mandate to prevent them from reaching shore. In July of 1999, the Coast Guard used fire hoses and pepper spray to try to prevent Cuban swimmers from reaching shore and drew criticism for endangering the refugees. Though the Obama administration is now trying to normalize relations with Cuba, the policy remains in effect.

Refugees are forced not only to navigate dangerous waters but also to strike a balance between perils. If they arrive in enough danger, they can be rescued; if they make a safer crossing, they face the danger of being turned back when intercepted.