After losing eleven straight special House elections, Republicans are taking comfort in Charles Djou’s victory. If the Democrats aren’t safe in the birthplace of President Obama* and a D+11 district, they aren’t safe anywhere. Of course, being elected to the House with 39.4% of the vote is only possible under extraordinary circumstances. Nate crunched the numbers and attempted to extrapolate what (if anything) this three-way race really bodes for November. Results: inconclusive.

In this case, the Democratic vote was split between State Senator Colleen Hanabusa (30.8%) and former Congressman Ed Case (27.6%). (Minor candidates and spoiled ballots accounted for 2.5%.) All voting was done by mail, and there were no party primaries to select the candidates. After it became clear that neither Democrat would withdraw, the DCCC pulled resources and resorted to urging voters to vote for Not Charles Djou. But staying in the race was the dominant strategy for both Case and Hanabusa. There will be a real election in November, and the Democrats will hold a primary to choose one candidate. Better to cede the seat to a Republican for seven months than to let the other Democrat enter the fall race as an incumbent. And in this district, Charles Djou now challenges Anh Cao of New Orleans for the title of most-endangered House Republican.

Possibly the only thing this election demonstrates is that first-past-the-post systems are ill-equipped to handle more than two serious candidates. The winner can be elected with far less than a majority, while other candidates split the vote. In the UK, this is the source of much vexation for the Liberal Democrats, who are the weak sister in most parliamentary constituencies. One possible solution is to adopt a system of instant-runoff voting, called alternative voting in Britain. As in a proper runoff, a candidate must secure 50% of the vote plus one to be elected. But unlike a runoff, which requires the time and expense of holding a second election, an instant runoff is, well, instant.

In IRV, instead of voting for one candidate, voters rank their preferences: 1st, 2nd, 3rd…(theoretically, up to one fewer than there are candidates in the race). The talliers then count the candidates’ 1st-choice votes. If one person has a majority, it’s over: he or she wins. If not, the last-place finisher (or finishers, if their combined vote total is less than the next highest candidate’s) is eliminated, and their 2nd-choice votes are divided up amongst the remaining candidates. If still no candidate wins an outright majority, then again the last place finisher is eliminated, the 3rd-place votes divided, and so on, until someone reaches a majority. This system is used for electing the President of Ireland, and in some local elections in the US, such as for Mayor of Burlington, VT.

What would have happened if Hawaii had used IRV in its special election? Here’s the vote breakdown as it actually happened: 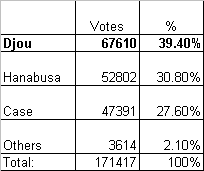 Under IRV, Case and the minor candidates would be eliminated, as their combined vote total (51,005) is less than Hanabusa’s (52,802). That leaves Djou and Hanabusa in a two-way race. Now for some speculation. In Burlington’s first IRV race, 10% of voters failed to make a 2nd choice vote. I’m assuming the same level of drop-off in this race. For Case voters, I’m giving 30% of their 2nd choice votes to Djou, and 60% to Hanabusa. I’ve given such a high percentage to Djou because of that reluctance to let Hanabusa enter November’s election as an incumbent. For the ‘Other’ voters, I’m assuming that those who did vote in the 2nd round split the same way as the overall 1st-round breakdown (i.e., Djou 39.4%, etc.): 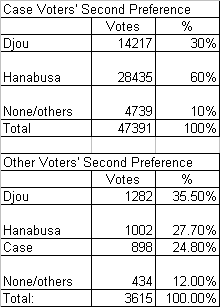 This produces the following result:

Djou still wins under these conditions. But what if Case voters are in fact more favorable to Hanabusa? Here’s what we get assuming Hanabusa gets 80% of Case voters, Djou 10%:

This time Hanabusa wins quite decisively. To prevail under IRV, Hanabusa would have to win just over 60% of all available 2nd-round votes, while Djou would have to win about 30%. (Still assuming 10% drop-off.) So who would have won the race? It’s hard to say, and depends largely on whether Case voters were voting for Ed Case or for a Democrat. Prior to the election, Case had been polling better, and was considered the favorite to come in second. Some Case voters may have actually preferred Hanabusa, but voted for the more “electable” candidate. (It’s also quite possible that the ‘Other’ voters’ second preferences would have looked nothing like the overall vote breakdown.)

If the race had been IRV from the get-go, there would have been no incentive to vote for electability. The instant runoff system prevents candidates from playing spoiler, and frees voters to choose their truly preferred candidate.

Don’t hold your breath waiting for instant runoffs in American congressional races, though. Most US races are still won with outright majorities, and Americans have a general aversion to “complicated” voting mechanisms. In the UK, however, parliamentary elections could move to alternative voting. Voting reform has long been the Holy Grail of the Liberal Democrats, with proportional representation their favored method. PR is almost certainly a non-starter for the Conservatives, but AV could be an acceptable alternative. Having AV in place would have made little difference in the outcome of the May 6th election, but would likely change the vote calculus in future elections.

IRV/AV is not without its critics. Besides the obvious “it’s too complicated” complaint, it’s criticized for encouraging tactical voting and allowing some voters to vote twice. (First-past-the-post also encourages tactical voting, just in a different way.) And, of course, it’s not a proportional system: one winner still emerges from one district. But IRV/AV can prevent impasses like the one in Hawaii, where someone can win even while over 60% of the electorate voted against him. And it does so without the added cost, hassle and delay of holding a separate runoff.

*If you believe the lame-stream media.

—
This article was authored by research assistant Thomas Dollar. Please send comments or suggestions to sexton538@gmail.com