MAJOR UPDATE: Public Policy Polling is out with its results now, and Coakley is trailing by a point. (Within the margin of error, but still….)

Senate elections are to me the most fascinating in American politics because, from an intergovernmental perspective, they are contests for federal office conducted on a statewide level but often with significant local factors at play. Other than the seven smallest states that elect their lone, at-large House member statewide, Senate contests are unique in this way. One reason that presidential results tend to be rather consistent across cycles, especially of late, is that candidate factors–aside from home-state connections–are essentially held constant across the states, making the result a purer referendum on the ideological-partisan identity of each state. But because every Senate race has its own candidates and campaigns, and the elections themselves are staggered, Senate delegations can split in a way Electoral College results–Maine and Nebraska aside–cannot.

Nevertheless, thanks to increasing party polarization on the state and even regional level, the number of split-state delegations since the 1970s, according to Daniel Butler and Matthew Butler, has been falling steadily and, of late, more rapidly. The figure immediately below, shared with 538 by Daniel Butler, shows the historical pattern. At present, if you count Bernie Sanders and Joe Lieberman as caucusing Democrats, fewer than one-fourth of American states–a dozen, depicted in second figure below–have split delegations. 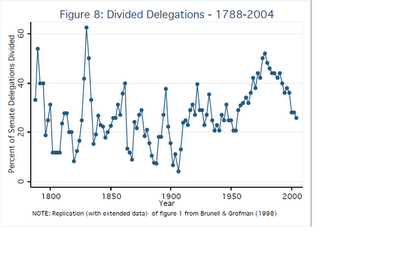 Massachusetts is perhaps the state one least expects to have a split-state Senate delegation. It has voted for the Democratic presidential nominee each of the past six cycles. (Only Minnesota has a longer streak.) Since 1984, when John Kerry first won his current seat as the Bay State’s now-senior senator, it has had two Democratic senators. It is the largest state in the nation with a one-party House delegation, too: All 10 Massachusetts’ representatives are Democrats. The Dems also control both chambers of the state legislature and the governorship. I cannot think of a similarly-sized state at present that is so thoroughly dominated by Republicans.

All of which is wind up to say that the Republican nominee Scott Brown ought to be dreaming if he thinks he can beat Democrat Martha Coakley to win the special election to fill the late Ted Kennedy’s seat, right? 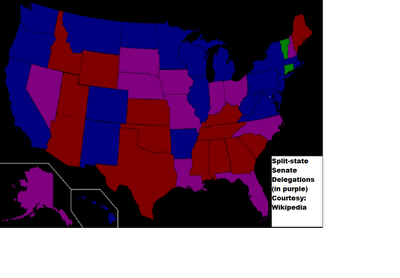 Not so fast. As Washington Indy’s Dave Weigel points out, Coakley hasn’t exactly pulled away in this contest: Public Public Polling’s Tom Jensen reports new numbers showing Coakley with a 9-point lead in what Jensen now deems a potentially “losable race” for the Democrats. (Correction: Rasmussen poll showed a 9-point lead, but it was Jensen who referred to it this week as a “losable” race. Sorry for the confusion on the poll origins.)

Coakley–who, and maybe this is just me, bears a resemblance to former Democratic veep nominee Geraldine Ferraro–will probably hang on to win, maybe even by a comfortable margin. But the Republicans couldn’t be better situated. This is not a regularly-scheduled race in a presidential cycle, or even a regularly-scheduled race in a lower-turnout midterm cycle. It’s a special election in January of a midterm cycle year in which the Democrats have unified control of the state and national governments at a time of voter unease. If lower turnouts in midyear cycles tend to help Republicans, turnout during a special election on a (cold?) January day could be even worse and, thus, less likely to favor Coakley.

Further compounding the situation is the very short turnaround time Coakley, as nominee, has had to establish herself and her campaign operation during the holiday-interrupted, six-week sprint between winning the nomination on December 8 and the upcoming January 19 special general election. All else equal, a longer period between primary and general dates probably favors the stronger state party, much in the way that the better team during a 162-game baseball season often loses in a short playoff series. So the timing of the special election actually works two ways against Coakley and the Democrats.

Again, she’ll probably hold on. But the temporal-electoral stars are aligned about as good as they can be for Brown and the Massachusetts GOP. Teddy must be rolling over in his grave.