Harold Ickes keeps shouting about 600,000 votes in Michigan being thrown out. But as I’ve pointed out before, the turnout situation in Michigan wasn’t remotely normal. According to Jay Cost’s spreadsheet, turnout in Michigan was equal to 24 percent of John Kerry’s vote in 2004. However, the average in other states with open primaries was 79 percent. In other words, turnout was only about one-third as much as it should have been. The judgment of two-thirds of the voters in Michigan was essentially that the primary didn’t matter and wasn’t worth their time.

Florida was a little bit more normal. Turnout was equal to 48 percent of John Kerry’s vote; the average in other closed primary states was 59 percent. 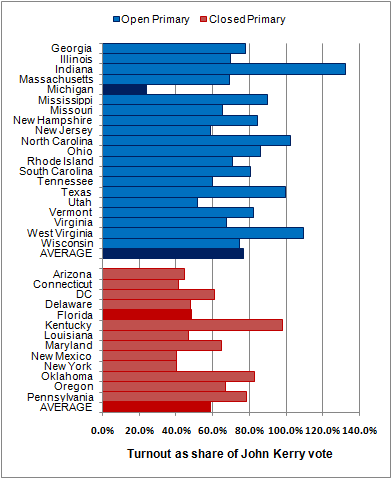