I have received a couple dozen requests in my inbox asking me to apply my projection model to the state of Michigan. How would the vote have turned out if Barack Obama’s name was on the ballot? Would Michigan have behaved more like Wisconsin, which Obama won handily? More like Ohio, which gave a big victory to Clinton? Or more like Indiana — a toss-up from start to finish?

I am not going to use my regression model to answer this question; I worry that such a thing would look like a big soup of numbers, seemingly having come out of nowhere. But I am going to address the question through another approach. Specifically, I am going to take each of Michigan’s 15 congressional districts, contemplate their key demographics, and identify comparable congressional districts in other states where Barack Obama’s name did appear on the ballot. If we could show, for example, that Michigan’s 12th district is similar to Pennsylvania’s 14th, and Obama received 52 percent of the vote in PA-14, that gives us a reasonable estimate of how he might have performed there in a normal primary.

The method I use to identify similar congressional districts is called a nearest neighbor analysis, which has applications in genetics and a number of other fields. Essentially, we are trying to find out how close two points are to one another in n-dimensional space. In this case, the points represent congressional districts, and the dimensions represent different demographic variables that we have found to have a relationship with the percentage of the vote that each Democratic candidate receives. Specifically, the variables we look at are as follows:

The order in which I’ve listed these variables is significant, and reflects their relative importance in determining the Obama-Clinton vote share (as determined through analysis of variance). The more significant variables, like the black population share and education, therefore receive more weight in the similarity equation.

What we then do is look at the average of the two-way vote share (Obama and Clinton, excluding all other candidates) that Barack Obama received in each district. For example, if we identify three comparable districts for MI-7, and Obama received 40, 42, and 44 percent of the two-way vote in each of them, the average is 42 percent, and that is our estimate of how he would have performed in MI-7. We then assign each district’s delegates accordingly. 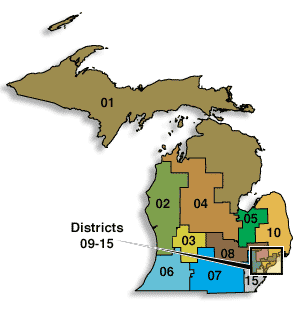 MI-1 (Upper Peninsula). We describe the first district as the Upper Peninsula, but the U.P. proper consists of about only half its population, the rest being in the northern reaches of the Lower Peninsula. Demographically, it’s similar to several of the “Pennsyltucky” areas of Pennsylvania that went about 2:1 for Senator Clinton — rural, white, and working-class. Culturally, it’s somewhat sui generis, as it’s more liberal than most of the Pennsylvania districts, and has a somewhat unique ethnographic stock full of Finns and a few French Canadians. The most analogous districts are probably in Minnesota and Maine, but we can’t use those states since they held caucuses. In any event, the delegate split would very likely be 3-2 Clinton, but I’m not convinced she’d win by quite this margin. Projection: Clinton 65.2, Obama 34.8; Clinton 3-2 Delegate Win. 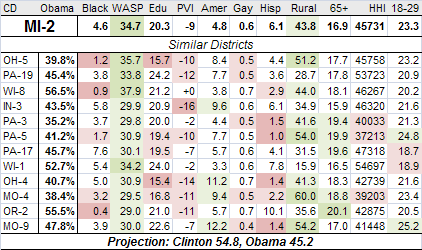 MI-2 (West / Muskegon). The second district stretches across the eastern shore of Lake Michigan, comprising numerous small and medium-sized towns like Holland and Muskegon. It is known for being culturally conservative and quite religious (Presbyterian, mostly), but it is also quite WASPy and certainly solidly middle-class rather than working-class. I can imagine this district going to either candidate at different points in the campaign, but there are a lot of similar districts throughout the country, and the clear majority wound up in Clinton’s column. Projection: Clinton 54.8, Obama 45.2; Clinton 3-2 Delegate Win.

MI-3 (Southwest / Grand Rapids). Definitely a swing district, especially given its odd number of delegates. The city of Grand Rapids itself is upper-crust enough that it would probably go for Obama (though much of it would be voting in the Republican primary), but MI-3’s smaller towns are working class and would tilt toward Clinton. Projection: Obama 50.4, Clinton 49.5; Obama 3-2 Delegate Win. 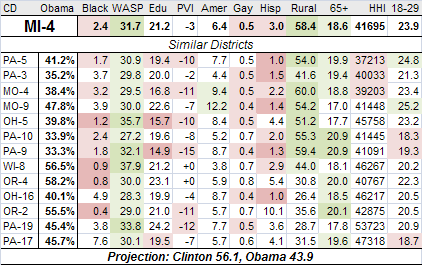 MI-5 (East / Flint). This is a somewhat idiosyncratic district. While the city of Flint has a sizable black population, both Flint and the rest of the district have enormous unemployment problems brought about by the decline of the domestic auto industry. IN-1 in Northwest Indiana is not a bad fit, but has some relatively well-off Chicago exurbs that aren’t really to be found in MI-5. On the other hand, the couple of Ohio districts the model identifies are better fits economically, but have smaller black populations. Splitting the difference, we have MI-5 going to Clinton by 10 points, but its six delegates being split. There would have been a ton of campaign activity in the district because of its symbolic connections with NAFTA and the recession. Projection: Clinton 55.0, Obama 45.0; 3-3 Delegate Split.

MI-6 (Southwest / Kalamazoo). I’m glad the algorithm found IN-3, which shares a border with this district, although MI-6 is more moderate politically and has a more substantial black population. It also has the college town of Kalamazoo. Nevertheless, it leans Clinton. Projection: Clinton 53.2, Obama 46.8; Clinton 3-2 Delegate Win. 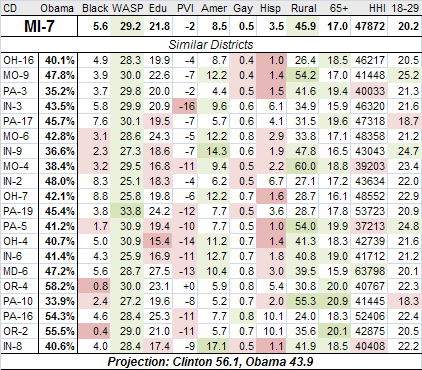 MI-7 (South / Battle Creek). This type of district is extremely common throughout the Midwest: middle-class and somewhat rural, but otherwise largely unremarkable. Our algorithm identifies no fewer than 20 similar districts, and 17 of those went for Clinton. Projection: Clinton 56.1, Obama 43.9; Clinton 3-2 Delegate Win.

MI-8 (Central / Lansing). Obama would do exceptionally well in East Lansing, home to Michigan State University, and win the wealthy suburb of Okemos, while perhaps narrowly losing the industrial city of Lansing itself. But some of the more rural areas of MI-8 are almost like some exclave of West Virginia and have a history of racial intolerance; note the high percentage of residents who identify themselves as “American”. The best analogy is perhaps to OH-15, which contains parts of Columbus and Ohio State University and which Obama won very narrowly. In practice, it wouldn’t matter very much who won the popular vote, as this district has six delegates and they’d almost certainly be split. Projection: Clinton 52.5, Obama 47.5; 3-3 Delegate Split.

MI-9 (Southeast / Oakland County): First thing, here is a map to guide us through the remaining, largely urban districts: 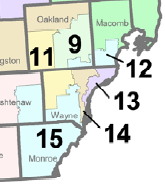 Oakland County is wealthy and very suburban, with just a few leftover pockets of heavy industry. The two suburban Philadelphia districts the model identifies are natural comparables and both of them split their votes almost evenly. With a 3-3 delegate split all but assured, MI-9 would have few consequences in terms of the overall math. Projection: Obama 51.1, Clinton 48.9; 3-3 Delegate Split.

MI-10 (East / St. Clair): Although located in Michigan’s “Thumb” region in the eastern portion of the state, the tenth district has more in common with something like MI-2: fairly well-off, but very white and somewhat rural. Like MI-2, it would probably go to Clinton. Note that there are quite a number of these five-delegate districts that are tipping slightly to Clinton. Projection: Clinton 56.9, Obama 43.1; Clinton 3-2 Delegate Win.

MI-11 (Southeast / Livonia-Novi). Livonia-Novi sounds like some sort of rare genetic disorder, but instead they are the names of two of the larger towns in this relatively undifferentiated mass of suburbia. MI-11 is ever so slightly different than MI-9, consisting more of bedroom communities for auto industry executives than self-contained, high quality-of-life suburbs. As a result, its school districts are not as strong, and so it has fewer young people. The model thinks that Bucks County outside Philadelphia is a good analogy, which went surprisingly strongly for Clinton; we also find Duncan Hunter’s district outside San Diego. Projection: Clinton 54.2, Obama 45.8; Clinton 3-2 Delegate Win.

MI-12 (Southeast / Royal Oak). While portions of this district resemble the suburban MI-9 and MI-11, there are also cities like Southfield that contain large African-American populations and represent rough extensions of the city of Detroit. The three best comparables we can find all went narrowly for Obama. Projection: Obama 53.4, Clinton 46.6; 3-3 Delegate Split.

MI-13 (Detroit – East). Detroit’s city limits stretch across two districts, MI-13 and MI-14, but neither of them are purely Detroit, as they each contain some suburban pockets. However, Detroit is the blackest large city in America (more than 80 percent of its population is African-American) and that definitely carries the day. We need a bit of a weird mix of comparable districts to reconcile with MI-13, including PA-1 in Philadelphia as well as an Alabama district, but the margin looks about right. Obama would be pretty close between earning four and five delegates here. Projection: Obama 74.7, Clinton 25.3; Obama 4-2 Delegate Win.

MI-14 (Detroit – West). The other Detroit district is just a tiny bit better off economically, but not by any large margin. More notable is that it also contains the suburb of Dearborn, which has an enormous Arab-American population (29 percent of Dearborn’s population speaks Arabic). It would have been fascinating to see how that dynamic played out the primary campaign. Projection: Obama 75.0, Clinton 25.0; Obama 5-2 Delegate Win.

MI-15 (Southeast / Ann Arbor). University of Michigan loyalists would be dismayed to find that they too have been compared to the OH-15 district in Ohio that includes portions of Columbus. But unlike MI-8, there aren’t really any rural areas in this district of the sort that might give Obama problems. Instead, there’s another college town in Ypsilanti, and a series of industrial suburbs between Detroit and Toledo. Obama would be the favorite here, but it’s unlikely he could do better than to split the six delegates without exceptionally heavy student turnout. Projection: Obama 52.3, Clinton 47.7; 3-3 Delegate Split.

We show Clinton as picking up an extremely thin 42-41 majority of congressional district level delegates, with several delegates that could reasonably flip from one side to another. There is every indication that the race would be extremely close throughout the state.

In order to distribute Michigan’s state-level districts, we first need to estimate its turnout. The three states that share a border with Michigan — Indiana, Ohio, and Wisconsin — all held open primaries, and they all had very consistent turnout figures. In Indiana, 27.0 percent of the eligible voting-age population voted in the Democratic primary. In Ohio, that figure was also 27.0 percent, and it was 26.3 percent in Wisconsin.

By contrast, Michigan’s turnout in its unsanctioned Democratic primary was 594,398, or only 7.8 percent of its eligible voting age population. That is about three-and-a-half times less than it “should” have been, based on the patterns in Indiana, Ohio and Wisconsin. So, what we will to instead is to take the average of the turnout figures in Indiana, Ohio and Wisconsin, which equals 26.8 percent of the eligible voting-age population. Applied to Michigan, that implies turnout of slightly more than 2.0 million voters:

In order to distribute this turnout to each congressional district, what we will do is to combine the turnout in each CD from Michigan’s 2004 and 2008 primaries and allocate its 2,039,369 projected voters in proportion to that total. That yields turnout estimates ranging from 95,257 in Republican-leaning MI-2 up to 197,051 in the Democratic stalwart district MI-14. We then multiply each candidate’s win share by the turnout estimate in each district to come up with the overall vote. 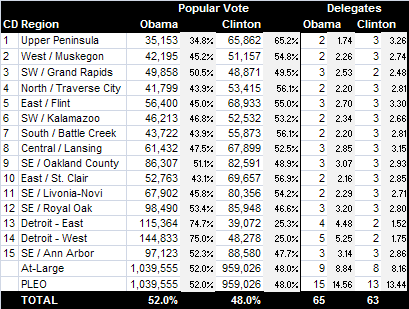 Overall, we project that Obama would have carried Michigan by a narrow margin — about 4.0 percentage points or 80,000 votes. After accounting for delegates awarded at the statewide level, we project him to win 65 Michigan delegates to Clinton’s 63. Certainly, there is some margin for error in these calculations, and Clinton could certainly have won the state herself. But it would undoubtedly have been very close. Interestingly, if you take the average of the winning margins in Indiana (Clinton by 1.2 points), Ohio (Clinton by 8.7) and Wisconsin (Obama by 17.3), you come up with an average of Obama by 2.5 points, which is very close to our estimate.

There is also a strong relationship between our CD-level estimates and the share of the vote that “uncommitted” received in each district: 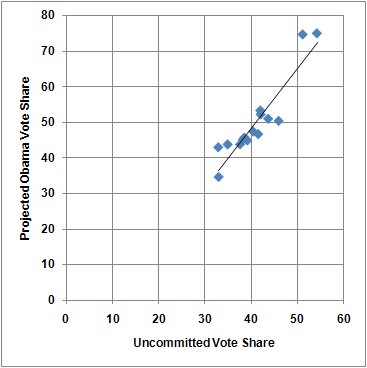