Barack Obama’s numbers in the Rust Belt region are now showing a relatively typical distribution of support: he’s a slight favorite to win both Pennsylvania (56%) and Michigan (52%), but a modest underdog in Ohio (38%). Hillary Clinton’s numbers, on the other hand, are a little bit flipped: she looks like she might win Pennsylvania somewhat comfortably in the general election, and she’s favored to win Ohio. But she hasn’t led McCain in a Michigan poll since Ann Selzer polled the state in December.

Is this some kind of a reverberation from the re-vote controversy in Michigan, as I’ve speculated below? Or is there something about the microtrends demographics in these states that reverses their usual order for Clinton? Below is a hodgepodge of demographic data on each state, some of which should be familiar and some of which is a little more exotic (I’m going to be incorporating a few more of these variables into our regression model in the near future). I’ll leave you with this, and let you come to your own conclusions. 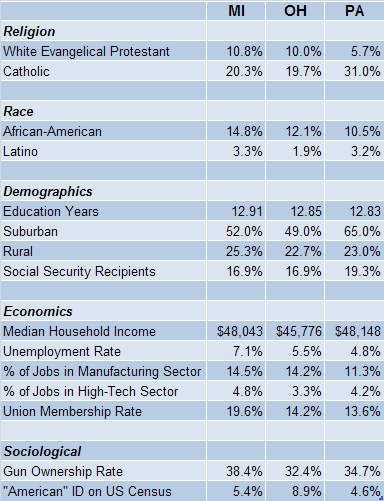