I will say that Steele is pretty clearly a fairly talented guy. If you take the nine open-seat Senate races that have been held between the last two political cycles (2006 and 2008), and compare the performance of the Republican candidate against the partisan composition of the state, then Steele is something of an outlier: you’d have expected a generic Republican to get only about 35 percent of the vote in a state like Maryland in a cycle like 2006, but Steele got 44.2 percent. 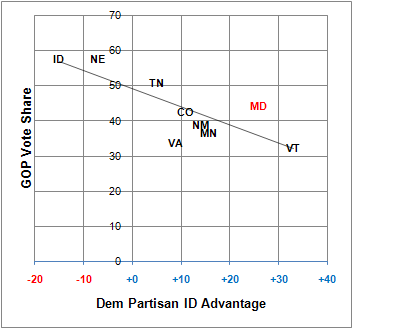 Now, granted, Ben Cardin wasn’t exactly the most inspiring candidate. But for a very conservative Republican to do this well in Maryland (and make no mistake: Steele is very conservative) takes some serious political intangibles.