Michael Bay’s (supposedly) final entry in the Transformers franchise came out last week to the usual treatment these films receive: awful reviews, solid domestic box office haul and eye-popping numbers in the Chinese and international market. All told, the five Bay Transformers films have made over $4 billion worldwide thus far, with only $1.4 billion of that coming from the United States and Canada.

It’s easy to rag on the mediocrity of the franchise: the films’ tired gender politics, the hiring of The Male Gaze to be the cinematographer, the mining of myriad racial and ethnic stereotypes for comedy, the slapdash writing, the product-placement overload, the self–aware dependence on McGuffins, the dubious humor and the reliance on milquetoast white guys to move the plot. Like, incredibly easy.

Still, these films are exceptional, in the literal sense that they are an exception to so many other movies we see on screen. Here are a few reasons why.

First, they use the maximum amount of CGI possible — Bay boasts that his movies have burned out servers at Industrial Light and Magic, and the visual effects are always bleeding edge — while still incorporating practical stunts. Here’s how the staffs behind the stunt work and CGI grew over the course of the films.

Indeed, the series is beginning to render actors irrelevant. I counted up1 the aggregate minutes in which top-billed actors Shia LaBeouf and Mark Wahlberg appeared on screen in their respective movies. It will not come as a huge surprise that the human stars don’t feature prominently. Watching “Transformers” for the acting is like reading Playboy for the articles. The plotlines for LaBeouf and Wahlberg are:

So it’s not a huge surprise that the presence of the lead actor in the film, which has never accounted for more than half of a movie’s runtime, has been steadily declining since the first “Transformers.” 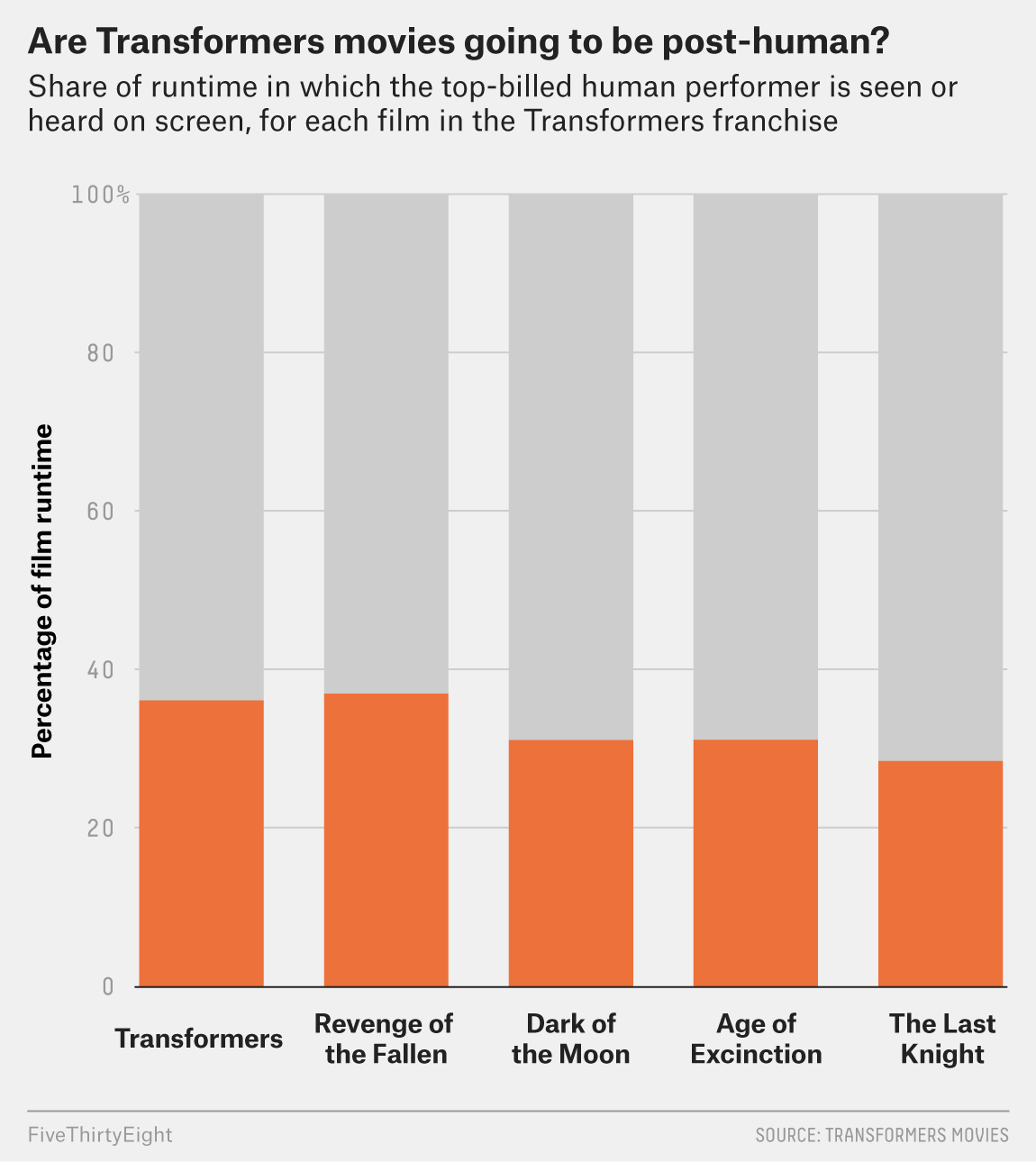 For perspective, at the current rate of human screentime decline, we’re about 17 more Transformers films away from just doing away with lead actors altogether. Perhaps they can teach a robot how to do Spielberg Face.2

Still, there’s one character who was absent in “Age of Extinction” but made a rousing comeback in “The Last Knight”: the U.S. military.

The Pentagon offers assistance to films that portray the military in a positive light, and only “Age of Extinction” — where the baddies are in the military-industrial complex and China offers the good guys major assistance — doesn’t thank a single military organization, let alone a dozen or more units, bases and commanders, for their assistance in the production of the film.3

Still, the pro-military reading of these films is pretty shallow. The Transformers films are remarkably anti-war: Earth is shown to grow increasingly shabby and bombed-out over the course the franchise’s conflict. The philosophical differences between the Autobots and the Decepticons are never discussed — at times both profess the vague values of freedom and the greater good and sacrifice. While the way the Decepticons carry out their campaign involves way more war crimes, it’s Optimus Prime’s diplomatic ineptitude that is ultimately responsible for the catastrophic loss of human life, despite his professions that he never wants to harm a human. The films make a strong case in favor of Stephen Hawking’s warning to stop trying to get in touch with extraterrestrials, who may view humanity the way we view bacteria.

The tragedy of the Bay Transformers films is that behind the spectacle, the Transformers are responsible for making life on Earth worse for everyone, but they are so enmeshed in their intergalactic boondoggle that it’s impossible for them to leave. In his five-film arc, Michael Bay has — intentionally or inadvertently, but certainly subtly — told the teenagers of the entire world about the ravages of war and the difficulty but inherent nobility of peace.

But man, the Driller was badass, you know?