Think how much different the conventional wisdom would be if Al Gore had won 300 more votes in Florida. Bush’s strategy of rallying to the evangelical base would have been considered a failure, as would the Rovian politics of personal destruction. But instead, because of what was essentially a mathematical coin-flip — the vote count was so close in Florida that nobody really knows who won — these things are considered to be standard operating practice in any competent campaign.

In the absence of actual results, what opinion-makers look toward instead is polls. And presently, with John McCain holding a 1-2 point lead in most national polls, essentially every aspect of Barack Obama’s campaign has come under intense scrutiny, whereas Steve Schmidt is regarded as some kind of savant. This is even worse than being results-oriented, because we don’t yet know the ultimate effect of the choices the McCain campaign has made on November’s results. Certain of their choices, such as their intensely negative campaign against Barack Obama and perhaps even their selection of Sarah Palin, may be short-term winners but long-term losers.

Conversely, the Obama campaign’s focus on the ground game has come under criticism in some circles, even though almost by definition most of its effects will not be known until after the election. Suppose that, because of their ground efforts, the Obama campaign is 5 percent more efficient at turning out its vote than the McCain campaign on Election Day in the 22 states or so where it has concentrated its efforts. The implications of this would be absolutely enormous — a net of 2-3 points in each and every swing state — but we know zip, zilch, nada at this stage about their ultimate effect.

Besides all that, there is nothing particularly impressive about the Republican bounce. It has followed almost exactly the pattern that we predicted ahead of time when two typical convention bounces are taken and laid on top of one another: 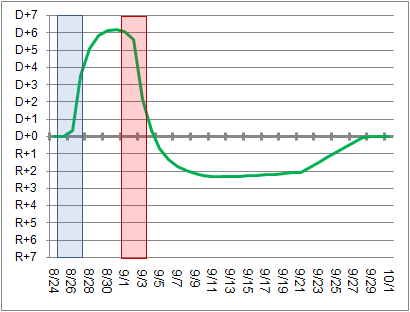 …that is, first a sharp tick upward in Obama’s numbers, peaking at about a 6-point bounce, and then an even sharper downtick, bringing McCain about 2 points ahead of where the numbers stood in the pre-convention period. The final phase has yet to occur, but was predicted to consist of gradual lessening of the net GOP bounce over a period of a couple of weeks, as the day-to-day banalities of the campaign tend to displace the emotional high of the convention from voters’ memory banks.

This is not to suggest that the Obama campaign is sitting on some sort of latent electoral magic bullet. If there are still 2-3 points worth of “bounce” in the McCain numbers, that would suggest once things return to equilibrium, Obama will be 1-2 points ahead rather than McCain being up by the same margin — better results for him, certainly, but hardly a commanding advantage.

The better question from my vantage point is why Obama’s lead dwindled from a peak of 5-6 points in June to 0-2 points in the week or two immediately prior to the conventions. Even if McCain’s convention bounce is entirely “real”, he would still have gained more ground in the polls between June and the conventions than he did during the convention period itself.

I think the Obama campaign’s messaging, with an exception here and there, has actually been fairly sharp of late. In contrast, I think they wasted a lot of time over the summer on things ranging from Obama having to play defense after he flip-flopped on FISA, to the European leg of his foreign trip, to the unnecessarily drawn out and ultimately anticlimactic VP rollout process. But since Obama had maintained a lead in the polls throughout that period, those things did not receive nearly so much scrutiny as Obama is getting now.