Do political scandals sting less than they used to?

Maybe — since unless you’re as careless as Anthony D. Weiner, the accumulations of the details of these scandals need to be reported by someone. And when that someone is the mainstream media, many voters will not trust them.

I took a tally of reaction in conservative blogs today to the allegations, originally revealed by a team of Politico reporters, that Herman Cain had been accused of sexual harassment on two occasions during the 1990s and had settled the cases out of court.

The conservative blogs that I counted were those that had been linked to on Memeorandum, an aggregation website, either Monday night or earlier that day.

I then classified the reactions as being either basically sympathetic to Mr. Cain, unsympathetic to Mr. Cain, or fairly neutral and adopting more of a wait-and-see approach. There were 46 conservative journalists or bloggers who wrote in enough detail about the allegations to allow me to characterize them in this way. (You can see the way I classified each individual blogger here — there were certainly a few debatable calls.)

Overall, the reactions were quite sympathetic. I counted 23 bloggers who either defended Mr. Cain or harshly critiqued the reporting in the story. There were just 6 bloggers, meanwhile, who took a largely unsympathetic position toward Mr. Cain. 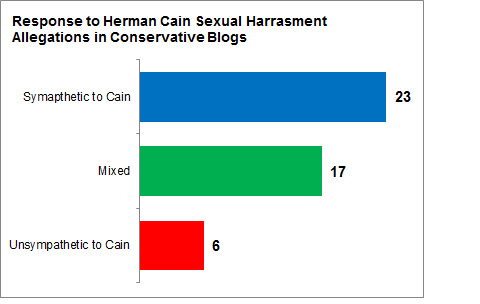 Mixed or wait-and-see reactions were also fairly common, however: I counted 17 of those. So while the reaction among conservatives has been pretty favorable to Mr. Cain for the time being, that could change if further details are revealed.

Still, most of the outlets that took a sympathetic view toward Mr. Cain did so not because they found particular flaws with the allegations but simply because they weren’t ready to give any allegations made by the mainstream media against a conservative candidate the benefit of the doubt. In some but not all cases, the reactions were more pointed than that; at Rush Limbaugh’s blog, the headline referred to the “left’s racist hit job” against Mr. Cain.

For the record, I thought that Politico reported the story fairly. I make no judgment about the veracity of the allegations or about how important or disqualifying they are.

But particularly given the already extant tensions between the political establishment, which is broadly dismissive of Mr. Cain, and the conservative grass-roots, which has evident affection for him, the accusations might carry less weight against him than they would against a more “mainstream” candidate.