The Obama campaign website has a very particular method about the way that it counts pledged delegates: 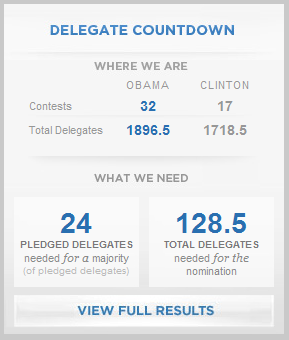 Yesterday, the Obama website showed him as needing 25 delegates to win a pledged delegate majority, whereas today it shows 24. The difference comes because Obama gained one delegate in North Carolina when that state certified its results.

But the Obama website is not counting former John Edwards delegates, even though eight of them have now declared their intentions to do their delegating for Obama. Nor is it counting the Maryland pledged delegate who flipped from Clinton to Obama.

True, the Obama campaign has the luxury not to sweat the small stuff; they will meet their definition of a pledged delegate majority on Tuesday with or without the Edwards delegates. Still, they are intentionally glossing over the fact that delegates aren’t bound by rule to vote for any particular candidate. Their working definition of a “pledged delegate” is something like: a delegate as selected at their state convention

EDIT: Well … maybe never mind all that, since the Obama campaign does seem to be counting the Edwards delegates in its communications to the media. But not, so far, to the public at large.