I’m not going to comment too much on the topline findings of the Daily Kos / Research 2000 poll, of Republican identifiers, which many others have written about extensively. What I found more striking, actually, were the cross-tabs. On just about every question, the results showed essentially no difference based on age, gender, race, or geography — once we’ve established that you’re a Republican, these differences seem to be rendered moot.

Take, for instance, the statement that “Barack Obama is a socialist”, which 63 percent of Republicans agreed with in the poll. How do the responses to this question break down by demographics? Well, they don’t — the percentage is just about the same for all groups. 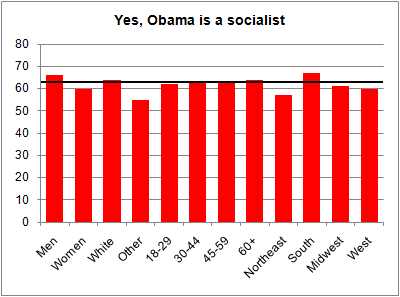 How about the idea that Obama should be impeached? The same pattern holds: 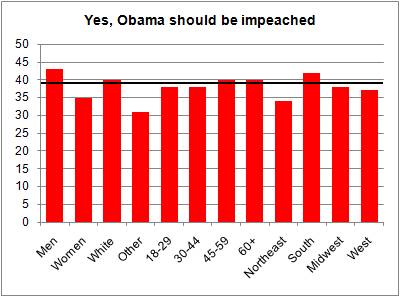 About 36 percent of Republicans in the poll said they didn’t think Obama was born in the United States (another 22 percent weren’t sure.) We see a few regional differences on this item — higher in the South and lower in other regions — but otherwise the percentages are fairly constant. 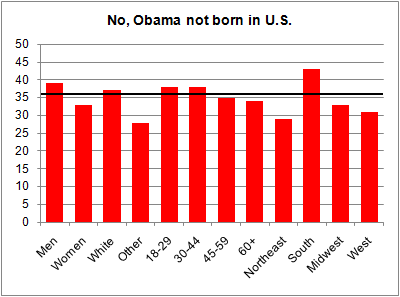 Is Obama a racist? The roughly 11 percent of Republicans who are nonwhite were much less inclined to think so, but otherwise there are no real differences. 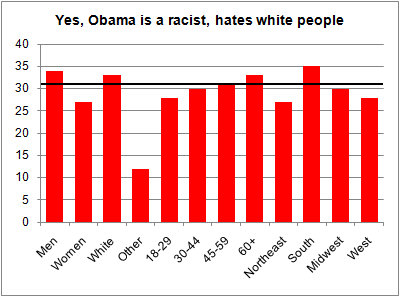 Moving on from Obama to some policy questions — should openly gay people be allowed to serve in the military? Only some very slight age and regional differences on this one: 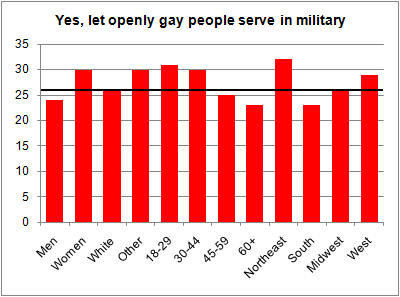 Sex-ed in public schools? Flat across the board. 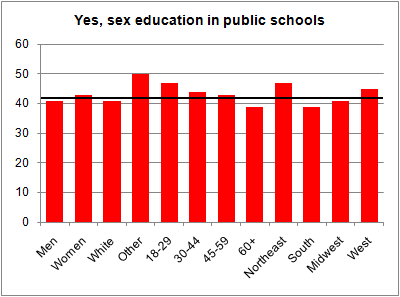 Amnesty for illegal immigrants? Nonwhite Republicans are about twice as likely to think so, but otherwise there are no real differences. 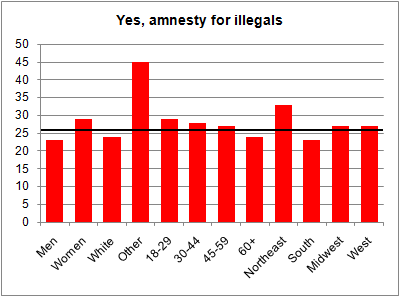 Let’s try an electoral question — who has Sarah Palin as their first choice in 2012? Although once again nonwhites are out of step, none of the other differences are statistically significant. 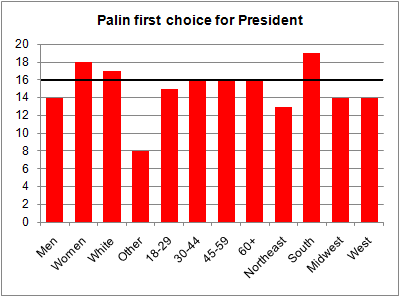 This doesn’t, by the way, mean that all Republicans are the same — clearly there is some diversity of opinion within the party (although they’re relatively small). What it does mean is that these ideological differences are just about all there are. If you take two Republican Congressional candidates and put them in the same primary, the outcome is liable to be the same whether that primary takes place in Alabama, Michigan, Idaho or Rhode Island, and whether the electorate is older or younger, more male or more female.

This accounts for what might be the Republicans’ greatest strength as we head into the November midterms as well as their greatest liability. The strength is that they can somewhat comfortably adopt a nationalized, one-size-fits-all message. They don’t have to worry about the constellation of constituencies that Democrats have: labor voters, Baby-boomer liberals, blacks, Hispanics, college-educated technocrats, libertarianish younger voters, etc. Their base is the same pretty much everywhere, and actuating a strategy that appeals to that base is not challenging.

The liability, meanwhile, is that while the Republican base might be the same pretty much everywhere, the rest of the electorate isn’t. Some states and districts have different ratios of Republicans to Democratic and independent voters. Moreover, they have different types of Democratic and independent voters, some of whom may be amenable to the Republican message and others of whom won’t be.

Thus, the Republicans are more likely to make suboptimal electoral decisions in individual districts — we have a fresh example from last night, in fact, in IL-10, a D+6 district where the Republicans nominated the conservative Bob Dold rather than the moderate Beth Coulson. But the Democrats are likely to have a difficult time articulating an optimal national message — and perhaps as a result a more difficult time governing.