UPDATE (April 28, 1:41 p.m.): We first published this article when Manny Pacquiao vs. Floyd Mayweather Jr. was still just a hypothetical. Now, with just days to go until the fight takes place, we thought we’d revisit it.

After years of silence about a potential fight against his longtime rival-from-afar, Manny Pacquiao, Floyd Mayweather Jr. said in an interview Friday that he wanted the fight. Boxing fans have been salivating over this matchup since 2009, but — if it even happens, a matter still in doubt — Mayweather vs. Pacquiao may have missed its window for “fight of the century” status.

Mayweather is undefeated over his career and is the top pound-for-pound boxer in the world, according subjective sources such as Ring Magazine and computer ratings such as those found at boxing database site BoxRec.com. Pacquiao ranks third on both lists, but it’s a distant third. By BoxRec’s ratings — which are constructed according to a philosophy similar to the Elo ratings we use to rank NFL teams — the difference between No. 1 Mayweather and No. 3 Pacquiao (680 rating points) is the same as the difference between Pacquiao and No. 29 Kubrat Pulev.

For fighters at the level of Mayweather and Pacquiao, a 680-point difference translates to a lopsided matchup. Using the careers of fighters in BoxRec’s current pound-for-pound top 25, for instance, cases in which one boxer had a pre-fight rating advantage between 550 and 800 points saw the favorite win 30 times in 33 tries, good for a 91 percent success rate. (If you want a second opinion, the boxing simulation program Title Bout forecasts a Mayweather win about 70 percent of the time.)

So, if nothing changes between now and the May 2 date Mayweather suggested for his bout with Pacquiao, it’s unlikely the battle will live up to the hype.

Things weren’t always so one-sided. While Mayweather was retired between December 2007 and September 2009, Pacquiao’s star ascended, particularly after back-to-back wins against Oscar De La Hoya and Ricky Hatton. And even after Mayweather returned from his hiatus with victories over Juan Manuel Marquez and Shane Mosley, Pacquiao kept winning, beating Antonio Margarito and then taking down Marquez and Mosley.

From mid-2011 into 2012, a Pacquiao-Mayweather bout would have been just about evenly matched by BoxRec’s ratings — and it would have featured an outrageously high combined rating of 3,251 points for the two fighters. By comparison, Muhammad Ali’s three celebrated fights with Joe Frazier averaged 4,105 combined ratings points, while the much-hyped bouts between Mike Tyson and Evander Holyfield averaged just 1,329 combined points.

But by then, negotiations between Mayweather’s and Pacquiao’s camps had stalled, sporadically restarting only to be quashed again. At the same time, Pacquiao’s dominance ended with a controversial split-decision defeat against Timothy Bradley and then a stunning knockout loss in a rematch against Marquez. Those consecutive defeats dropped Pacquiao’s BoxRec rating down to 731, his lowest mark since 2005 and a fall from which he’s still trying to recover. (For his part, since Pacquiao’s decline, Mayweather went to jail for two months after pleading guilty to domestic violence, then won four more times against opponents of varying quality to maintain his unbeaten career record.)

Here’s a chart showing the BoxRec ratings of Mayweather and Pacquiao over time, measured at 15-day intervals since Mayweather’s debut fight in October 1996: 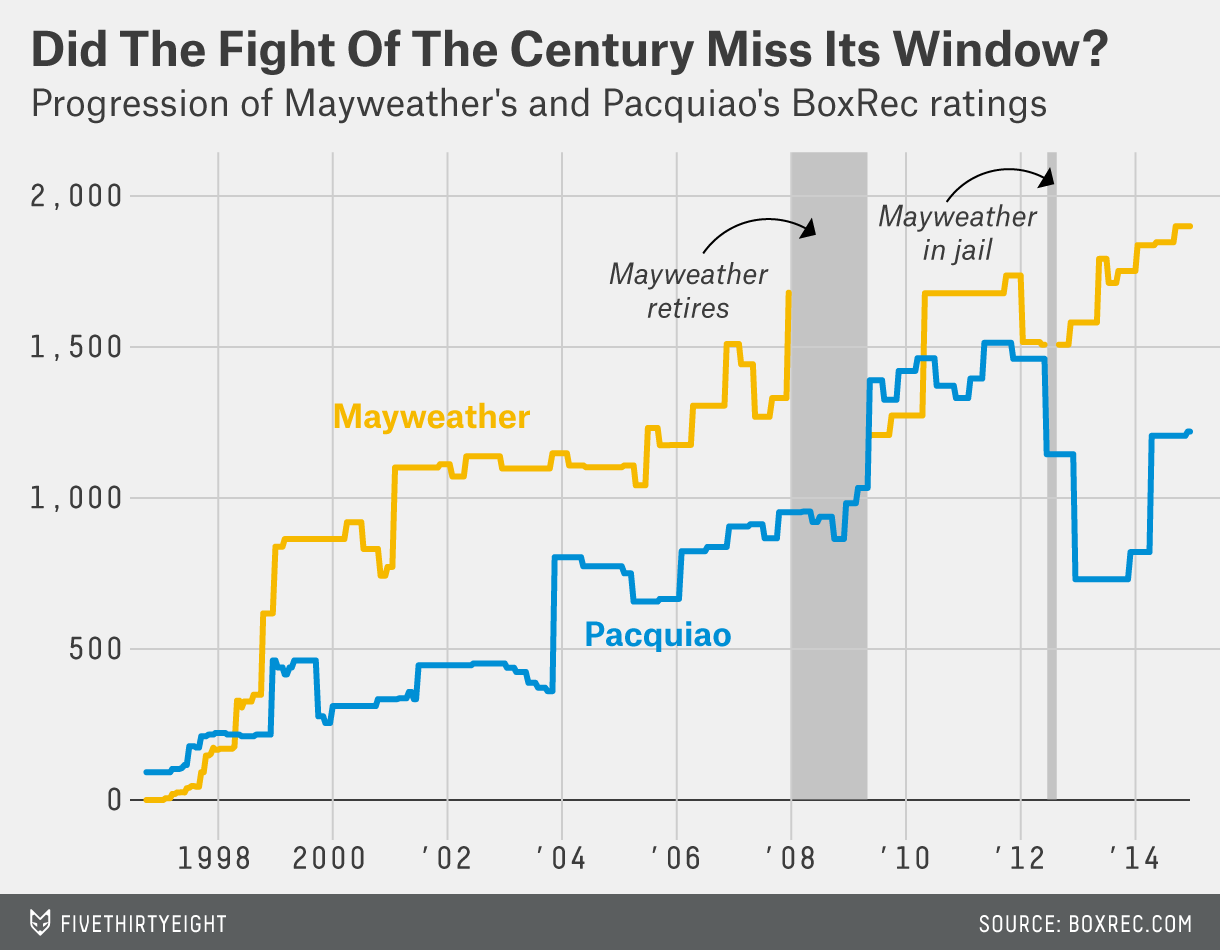 From the standpoint of catching both boxers in top form, a matchup between 2009 and 2011 would have been ideal. Now, although Mayweather’s rating is nearly the highest of his career, Pacquiao probably isn’t the fighter he was several years ago. Even if the fight happens, Mayweather and Pacquiao will have taken so long to iron out its details that they will have missed the opportunity for a classic bout between two all-time greats at their respective peaks.