Among sports’ most influential civil-rights voices, a few names frequently rise to the top. In an earlier era, Muhammad Ali was the defining figure; more recently, Colin Kaepernick has stepped to the forefront in the battle for equality. But as ESPN’s Howard Bryant recently pointed out, there is an athlete who is consistently missing from these conversations, even though her sacrifice in the name of justice has been as great as anyone’s:

Maya Moore, one of the most accomplished women’s basketball players in the history of the sport, announced in February 2019 that she was taking a sabbatical, one that she was hoping would allow her to tap into her faith and find her life’s purpose. “I’m sure this year will be hard in ways that I don’t even know yet,” she said. “But it will also be rewarding in ways I’ve yet to see, too.”

It would become clear that Moore, who turns 31 today, saw the idea of criminal-justice reform as part of her calling. In our current moment, when America’s policing of people of color is getting a long-overdue reexamination, Moore’s mission should take on an even greater significance in the history of athletes whose impact was felt beyond the game itself.

Even in 2017, well before she left the WNBA, Moore talked about how her great-uncle’s work in prison ministry had influenced her. Her great-uncle had gotten to know one incarcerated man in particular who stood out: Jonathan Irons. Moore’s extended family began researching the details of his 1998 conviction on first-degree assault, first-degree burglary and armed criminal action charges, which resulted in a 50-year sentence.1 No blood, footprints or fingerprints tied Irons to the crime; and Irons, a poor black teenager from Missouri, had been convicted by an all-white jury.

Irons was 16 years old at the time of the crime.

Moore, believing Irons had been wrongfully convicted, got more involved in the fight to exonerate him, both visiting and befriending him in prison while also attending his hearings.

The effort culminated in March when a judge overturned Irons’s conviction. “She saved my life,” said Irons, who is now 40 years old and has spent 23 years behind bars. “I would not have had this chance if not for her and her wonderful family.”

Moore compared the overturning of Irons’s conviction to hoisting a Final Four trophy. When she heard the news, she said she felt “redemption” for taking time off from basketball.

Moore has also held firm to her plan of sitting out another WNBA season.

Moore, of course, isn’t the first high-profile athlete to sacrifice a chunk of her career for a larger cause. Ali, who was an undefeated heavyweight champion when he was banned from boxing for refusing to serve in the Vietnam War, is perhaps the best-known case. Tommie Smith was discharged from the Army, and he and John Carlos — and their families — were subject to abuse for years after they raised their fists in a Black Power salute at the Mexico City Olympics in 1968. Curt Flood’s defiance paved the way for free agency in sports, and he was all but blackballed from baseball. And Kaepernick hasn’t been given a contract since taking a knee.

But in some ways, Moore’s decision is even more noteworthy. For starters, she has a resume worthy of GOAT consideration: six WNBA Finals trips, four WNBA titles, two NCAA titles at UConn, two Olympic gold medals and one league MVP award. According to our WNBA metric of wins generated, Moore (46.0) was the second-best player of the 2010s — trailing only teammate Sylvia Fowles (51.4) — despite not playing at all in either of the seasons that bookended the decade. And on a per-season basis, Moore generated more wins (5.7 per year) than anyone in WNBA history … except the GOAT herself, Cynthia Cooper:

Beyond that, she plays a pro sport that pays far less than others — one in which the salaries have been so low on a relative scale that many players go overseas during the offseason to play, even though that increases their injury risk. Moore walked away from the game despite having less of a chance than her male counterparts to build up financial security.

Moore’s sacrifice comes into even clearer focus when you consider the average aging curve of a WNBA player. To see how a typical great player’s career progresses, we looked at the top 27 currently retired WNBA players by wins generated2 and measured what share of their eventual lifetime value they produced through each age-season of their career, on average: 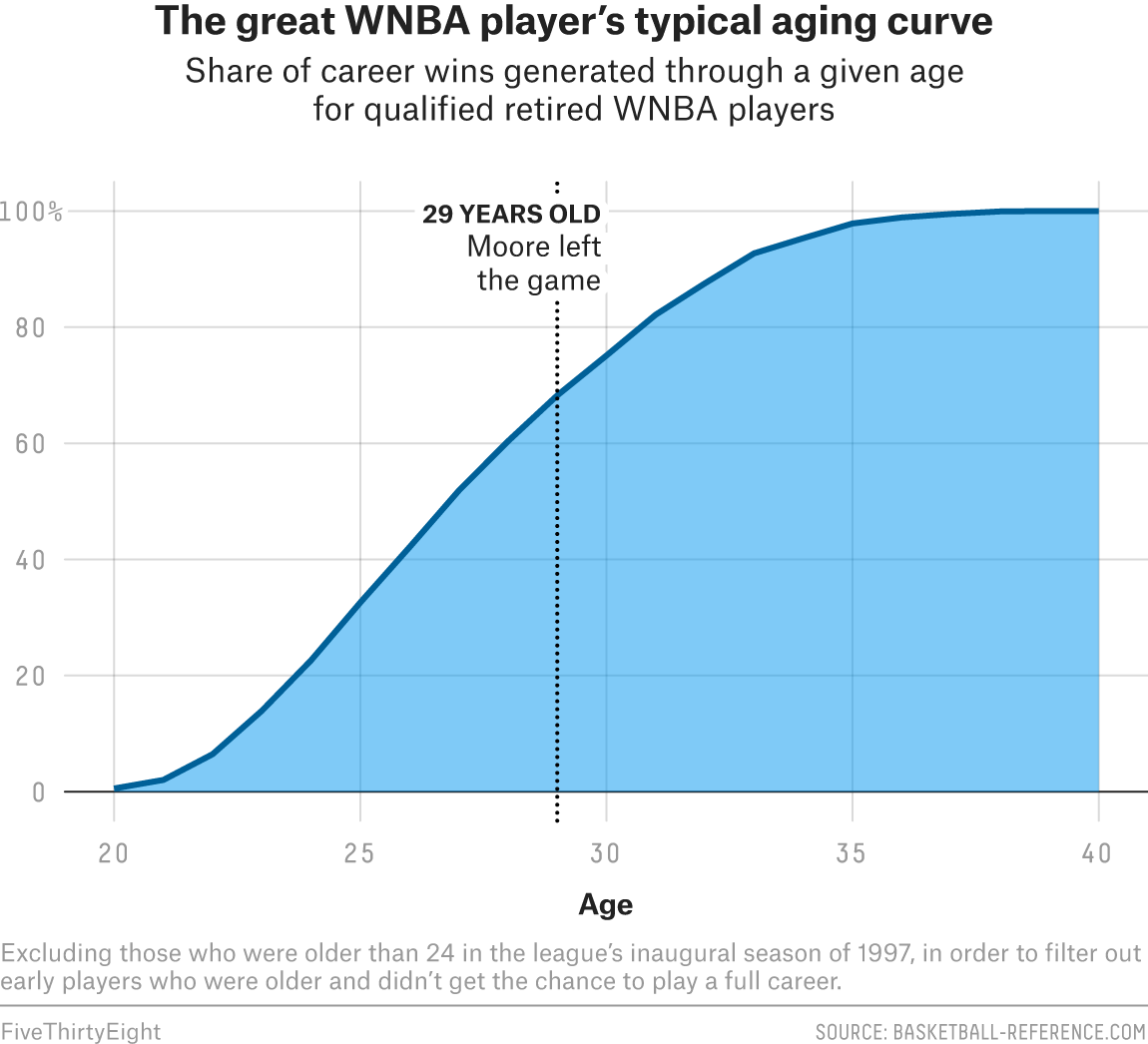 Through a player’s age-29 season — the age Moore was in during her last WNBA year — she tends to have generated about 68 percent of the wins she’ll ever produce in a career. The implication is that if Moore had played her entire career uninterrupted, she would have generated a total of 67.4 wins … which would have been second-best in WNBA history, behind Tamika Catchings (78.4). Maybe that’s overly optimistic — Moore had her worst season in 2018, before taking her hiatus — but it does give an indication of how great she had been up to that point.

To flip that 68 percent figure around, it also means Moore left the game voluntarily — to fight for Irons’s freedom — with roughly a third of her career left unfinished. And while Moore has said she does not plan to retire permanently, the years she has already missed were the most productive remaining in her career when she walked away. Going back to our aging curve for the average great player, she produces about 14 percent of her total career value at ages 30 and 31; from age 32 onward, only 18 percent of her career value is left to be achieved, on average.

That she put the ball down at 29 — after a seven-year run that saw six trips to the WNBA Finals — should put her in the same breath with some of the most dominant athletes of all-time who left their sports at such a young age. In fact, it’s hard to find a truly similar comparison for Moore’s sudden absence from the game.

Like Moore, Michael Jordan left basketball after his age-29 season — to play baseball — but he eventually came back to dominate the NBA again. (You might have recently seen a series about that.) Yao Ming retired in 2011 at age 30, but that was because of foot and ankle injuries. In football, Barry Sanders walked away at a young age, but he at least got an age-30 season in. Jim Brown left after his age-29 campaign, just like Moore, though that was mainly to pursue an acting career. In baseball, Sandy Koufax pitched his final game at age 30 because of an arthritic condition in his left elbow that made throwing a baseball agony. If you throw out players who burned brightly but retired prematurely due to injury, the list of Moore-like comparisons is quite short.

Even shorter is the list of truly great players who left a career behind because they believed in something bigger than the sport. (As much of a pioneer as Kaepernick was, even he was past his peak performance when he took a knee.) Moore is special because she could have gone about her business as one of the best players in WNBA history, but instead she chose to lend her voice and platform to victims of injustice.

For that reason, history should remember her in the same conversation as Ali and Kaepernick — a conversation that has only grown in importance over the past few weeks.