Note: results revised slightly from original version to be somewhat more consistent/inclusive/conservative about which polls I was including.

Let’s start by looking at the state of the popular vote, since those are the only metrics that Hillary Clinton has any realistic shot of winning.

Below is a table of the remaining primaries, and Clinton’s projected margin of victory (or defeat) in each of them. The margins come from a straight, unweighted average of all polls that were released in those states since the Texas and Ohio primaries. I cheated in Montana, which doesn’t have any polls, and plugged in a +10 for Obama.

The turnout estimates come from a regression model I ran at the state level, which attempts to explain the proportion of the 2004 John Kerry vote that has turned out in each primary. There were four factors, apart from the Kerry vote, that impacted these numbers:

1. Whether the primary is open or closed — open primaries draw significantly more turnout.
2. The level of campaign activity in each state, as measured by the combined number of days spent by Obama and Clinton in that state in the 30 days prior to the election.
3. Whether the primary was held on Super Tuesday — the Super Tuesday primaries drew somewhat less turnout than those contests held before or after Super Tuesday.
4. The percentage of African-American voters in each state — African-Americans are turning out in somewhat larger numbers relative to their share of the Kerry vote.

Note that I had to guess at the level of campaign activity in each of the forthcoming states. My guesses were that Obama and Clinton will spend a combined 22 days in Indiana, 20 in North Carolina, 12 in Puerto Rico, 10 in West Virginia (note that Puerto Rico and West Virginia have a day on the calendar to themselves — unlike the other states), 8 in Oregon, 6 in Kentucky, and 5 in each of Montana and South Dakota.

Also, I had to make an accommodation for Puerto Rico, since (obviously) John Kerry did not have any votes there. So I used was the vote total for Aníbal Acevedo Vilá, the winning candidate in the 2004 gubernatorial election (i.e. “President of the Island”). There are many different sorts of assumptions that one could reasonably make about turnout in Puerto Rico. As Jay Cost notes, Puerto Ricans have a tradition of high turnout; on the other hand, those have been in elections with Spanish-speaking candidates, who have built get-out-the-vote infrastructures on the island. You could probably come up with a number anywhere from about 300,000 to 1.2 million in Puerto Rico and have a reasonable justification for it; my number (about 800,000) passes my own personal sniff test.

If the current polling holds, the remaining primaries will be pretty much a wash; Clinton will gain a net total of maybe 70,000 votes and ten pledged delegates, give or take perhaps 50,000 because of the Puerto Rico turnout question. Somewhat obviously, this would not alter Obama’s course to the nomination — although it might slow it, depending on if and when Clinton decided to drop out.

How close would Clinton be in the various popular vote and delegate counts?

I have specified no fewer than 5 different versions of the popular vote count:

1. “DNC”, which is the popular vote in all DNC-sanctioned contests, including allocations for the caucus states (IA, NV, ME and WA) that have yet to officially release popular vote estimates. This is otherwise known as the “Best Obama count”.
2. “RCP”, e.g. Real Clear Politics, which is the same as above but without the allocations in those four caucus states. There is really zero reason to use this count and to entirely disregard/disenfranchise that group of caucus states, but it is in fairly widespread use in the media, and so I have included it.
3. “DNC+1”, e.g. the DNC count plus Florida.
4. “DNC+2”, e.g. the DNC count plus Florida and Michigan.
5. “Electoral”: the DNC count plus Florida and Michigan, but less Puerto Rico. I figure this is worth reporting because a change in the popular vote lead could lose some of its legitimacy if it was buoyed by huge margins in Puerto Rico. Clinton’s entire argument for counting Florida and Michigan boils down to their importance in the electoral college — but Puerto Rico contains zero electoral votes. That is not to say that there aren’t some legitimate arguments for including Puerto Rico — but there is some tension there.

But the ones I have listed are likely to have the most traction, and I would pay particular attention to two of them:

DNC +1: e.g. plus Florida. This is the count that Clinton surrogates like Terry McAuliffe seem to be targeting. And it is the first count that will begin to be taken seriously by the superdelegates. Nobody but nobody, or at least not the solid majority of superdelegates that Clinton would need to overturn Obama’s substantial pledged delegate advantage, is going to give her credit for the uncontested primary in Michigan, or agree to ignore caucus states entirely. But if Clinton wins the DNC +1 count, she might get a hearing at the convention.

DNC/Best Obama: However, in order to have a reasonable chance of winning that hearing, Clinton probably needs to beat Obama on one of his best counts. Imagine if Obama had a substantial lead in pledged delegates, and he led some (though not all) of the more credible versions of the popular vote count. Obama and his supporters would have the moral highground in arguing that the will of the electorate had been overturned. And to overturn it, the Democrats would be courting electoral disaster, because we wouldn’t be comparing Obama’s electability to Clinton’s electability in the abstract, but Obama’s electability to Clinton’s electability less the support of some undetermined number of angry Obama supporters who did not regard her nomination as legitimate. For Clinton’s nomination to have any pretense of legitimacy, she would have to beat Obama on all or almost all versions of the popular vote total.

How much ground does Clinton need to make up to win these popular vote totals? That information is buried in the column labeled ‘gain needed’. What those numbers mean is as follows:

– For Clinton to win the DNC +1 popular vote count — the one with Florida included — she will have to improve her poll standing in the remaining states by 5.5 points relative to where they stand now. So that would mean winning Indiana by about 10 points, losing North Carolina by single-digits, winning Puerto Rico by about 20 points, and so forth.

– For Clinton win win the “Best Obama” popular vote count, she will need to improve her poll standing in the remaining states by 12.2 points relative to where they stand now. So that would mean winning Indiana by mid double-digits, barely losing North Carolina, barely winning Oregon and South Dakota, and so on. In other words, she would have to battle North Carolina to a draw and run the table everywhere else, including some impressive-sized victory margins.

Winning the various pledged delegate counts is even further out there for Clinton. One significant and underreported development is that virtually all of Michigan’s “uncommitted” delegates have in fact committed themselves to Barack Obama. The upshot of this is as follows: Michigan and Florida are now completely irrelevant from the standpoint of the pledged delegate count. Obama will lead the pledged delegate count even with the entire Michigan and Florida delegations seated — unless Clinton improves her current poll standing by at least 23.3 points. The only importance of Florida and Michigan any longer is as talking points with respect to the various popular vote arguments that Clinton would like to make. For that matter, it might well be in Obama’s best interest to agree to seat the Florida and Michigan delegations, if it allowed him to claim the moral highground on the popular vote arguments.

So where does that leave us? Below is my assessment of each Democrat’s chances of winning the nomination based on various levels of improvement in Clinton’s standing in the polls. Note that this is a prediction about what would happen, rather than a prescription about what should happen. 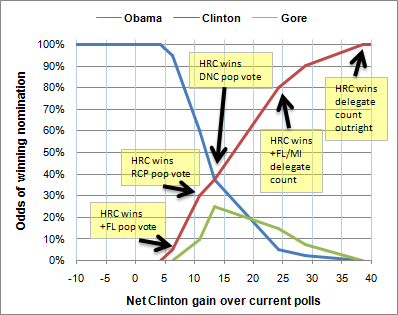 There are several lines of demarcation here:

1. If Obama maintains the status quo, or improves his numbers at all, or loses fewer than 5-6 points from his current position, he will be the nominee almost without question, as Clinton will not win even the Florida/McAuliffe version of the popular vote count. This is ignoring the small, residual possibility of an unexpected scandal or tragic event befalling Barack Obama.
2. If Clinton wins the Florida/McAullife count, she may succeed in taking the nomination battle to the convention floor. However, her chances of actually winning that floor fight remain rather low until…

3. Clinton wins the Best Obama popular vote count. At this point, I would guess that she was as likely as Obama to be given the nomination. I would also guess that there was a relatively substantial chance of Al Gore (or some other alternative like John Edwards) winning the nomination, as such a convention would almost certainly be brokered, with both candidates being able to make some strong claims toward legitimacy.

4. From this point onward, Obama’s chances of winning the nomination continue to fall — and Clinton’s continue to rise — rather precipitously. The reason is not that I expect the popular vote argument to trump the pledged delegate argument in the abstract, but how we get from here to there. If Obama lost 20 points off his current standing in the polls, he would still emerge with a material lead in pledged delegates, even with Florida and Michigan seated. However, he would also have lost 20 points in the polls — and something would have had to have caused that. Put differently — Obama will run out of electability real estate long before he runs out of pledged delegate real estate (but after he runs out of popular vote real estate).

If that ‘something’ were perceived to be Hillary Clinton herself, then again it might be Al Gore who emerged with the nomination. There is a tangible and increasing possibility of the NASCAR pile-up scenario: Clinton succeeds in making Obama unelectable, but in doing so, she so damages her own electability, or so turns off large segments of the Democratic base, that the Democrats have little choice but to cut their losses and nominate a ‘unity’ candidate like Gore.

Bear in mind that most of these scenarios are at the far reaches of the universe of the possible. I would put Obama’s chances of winning the nomination at about 85%, Clinton’s at about 10%, and Al Gore’s at 5%.