In Maryland, where I teach, people often tout their state as “America in miniature” because topographically it features everything from mountains to the Chesapeake Bay to the Atlantic Ocean. If the whispers I’m hearing about former Republican Gov. Bob Ehrlich making a run to recapture the statehouse turn out to be true, Maryland–a lopsidedly Democratic state–could provide a useful electoral microcosm for the rest of the country in 2010. 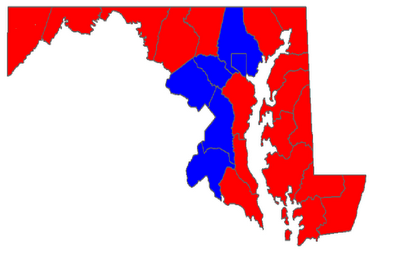 What I mean by that is a contest between Ehrlich and incumbent Democratic Gov. Martin O’Malley would control for a lot of the candidate/campaign effects and environmental factors and thus isolate the generic net effect on shifting partisan fortunes since 2008 or, I suppose, 2006.

As the incumbent, O’Malley will suffer any general anger toward incumbents, so we will see how that and/or anti-Democratic sentiment is expressed in the polls. Though Maryland is a blue state overall, its demographic mix of counties will provide some useful information in terms of where and among whom the electoral backlash occurs.

Overall, with a 6-point victory in 2006 and four years to build on it, if O’Malley loses that will say a lot about the breadth of voter anger. Maryland’s result will not be a perfect partisan referendum, but it has a lot of hallmarks of a microcosmic result.