There will soon be a new governor-elect in Texas, giving us an important data point about the status of political favor in the Lone Star State. And it will probably be discouraging to Democrats.

If polls are right, Republican candidate Greg Abbott, the Texas attorney general, will easily defeat his Democratic opponent, state Sen. Wendy Davis. This isn’t surprising. After all, Texas is the GOP’s flagship stronghold. However, because of rapid urbanization, population increases and shifts in demographics, many analysts wonder whether the state is turning into a winnable target for Democrats.

Texas hasn’t always been red. Fifty years ago, Lyndon B. Johnson — a Democrat from Texas — was re-elected president. His victory in the state was impressive; he earned more votes than Barry Goldwater in 238 of the 254 counties. He carried the cities of Houston, Austin, Dallas and San Antonio, but he also won in extremely rural places like Oldham County, drawing 397 of its 670 total votes that year.

There was a harbinger for Texas’s Republican turn. Months before the 1964 election, Johnson signed landmark civil rights legislation into law. The Civil Right Act was progressive, but the president was well aware it would prove costly to his Democratic Party in some parts of the U.S. That evening, Johnson told his press secretary, “I think we just delivered the South to the Republican Party for a long time to come.” He was right.

In 2012, President Obama, another victorious Democratic incumbent, won just 71 of Oldham County’s 869 votes. That’s 8 percent. It’s safe to say that Democrats are less popular there than ever. 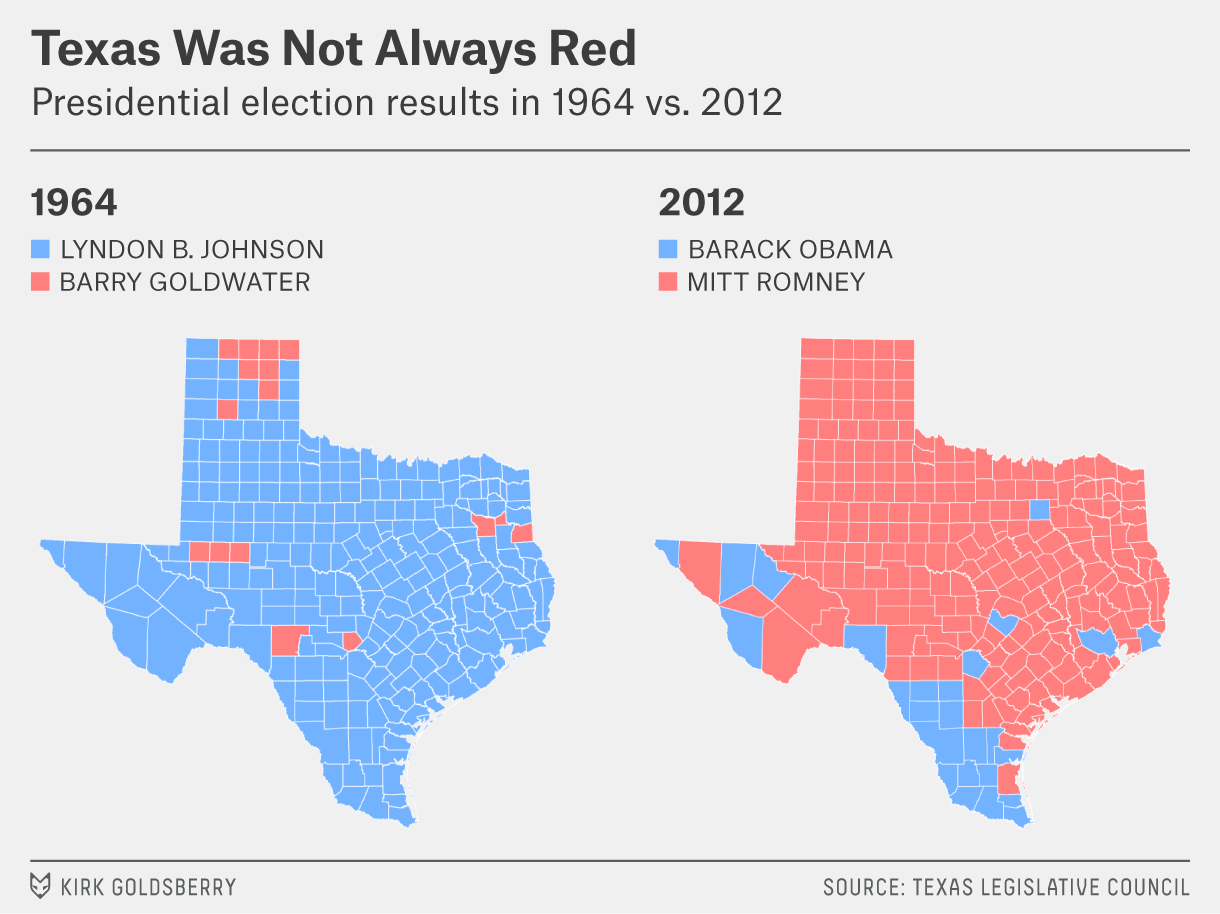 Still, it’s not all bad news for the lefties of the Lone Star State, and the choropleth maps above paint a deceptive picture of the Texan electorate. As it turns out, a vast majority of votes comes from a tiny portion of the state’s immense area. In fact, in 2012, 63 percent of votes came from the 14 most populous counties in Texas; the other 240 counties account for just 37 percent. 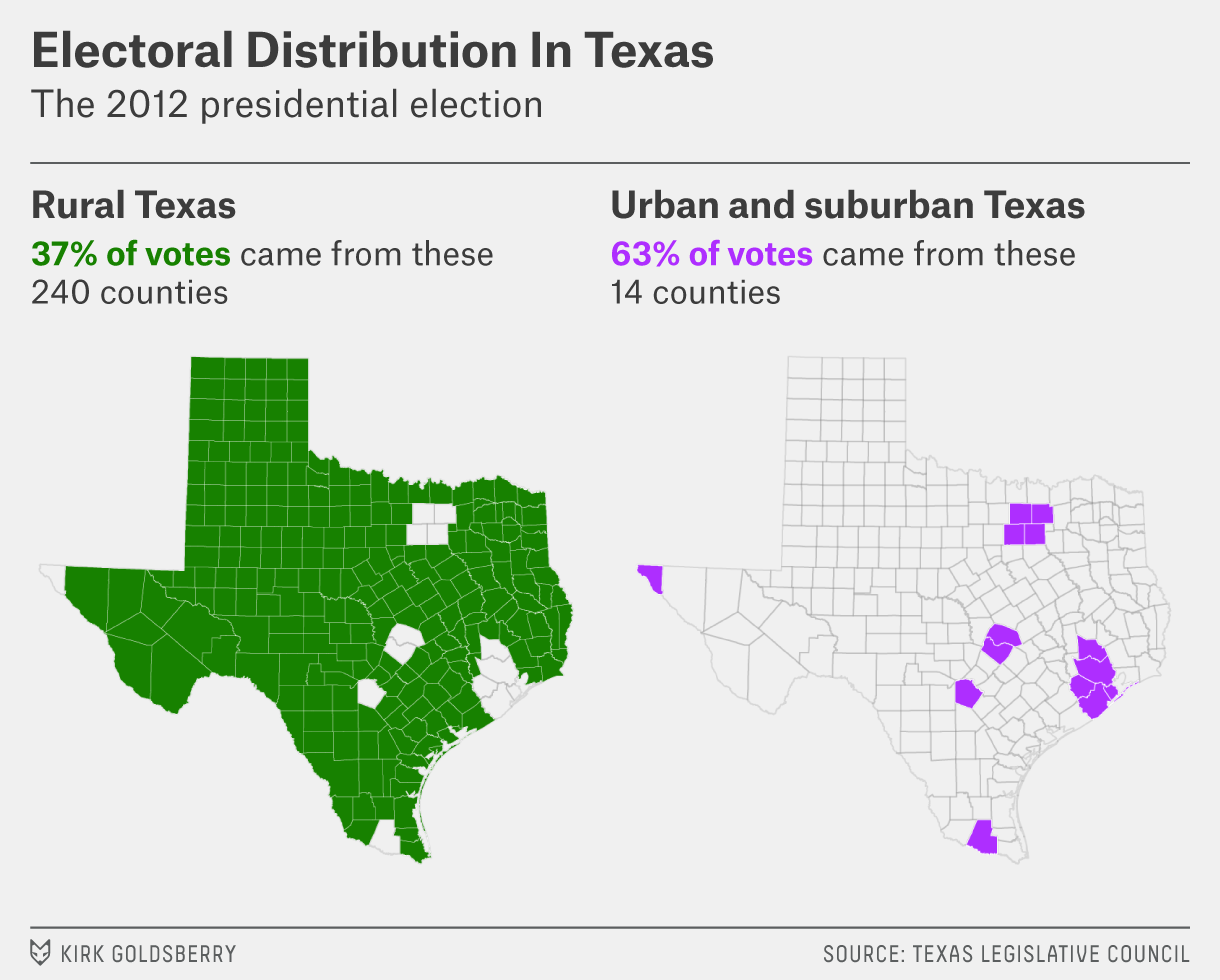 Over the past few decades, those 14 counties have been some of the fastest-growing in the state. The combination of a booming economy, immigration, domestic migration and high birth rates are not only expanding the population, they’re also changing the state’s electoral fabric. So, while places like Oldham remain steadfast in redness, they’re also becoming less influential overall; the state’s political outcomes have never been more linked to its urban and suburban voting blocks. And though it’s tempting to anoint this new, urbanized Texas as America’s Next Top Swing State, we’re not quite there yet. In 2014 those rural areas not only matter, but as Davis is likely to find out Tuesday, they often prove to be the GOP’s MVP in statewide and federal electoral contests.

In its current form, the Texan electorate is kind of a three-headed monster, and you can’t understand the structure and dynamics of Texan politics without understanding its trio of crania: the rural head, the urban head and the suburban head. Furthermore, you can’t win over Texas without appealing to at least two of those three heads. Right now, Democrats are only popular in the most urban places. Republicans not only dominate the rural areas, they also carry favor in the suburbs.

There are 8,952 voting precincts in Texas. In the densest third of precincts, Obama defeated Mitt Romney in 2012, winning 1.71 million votes compared to Romney’s 1.48 million. However, Romney’s easy wins in rural areas and the suburbs were vital to his triumph statewide.

The state has not just become more urban, it’s become a lot more suburban, too. The map below reveals just how much the suburbs have sprawled and swollen. Look at the counties around Dallas, Austin and Houston: Those suburbs are likely to include a more active electorate, which suggests they may hold the key to Texas’s future political identity. 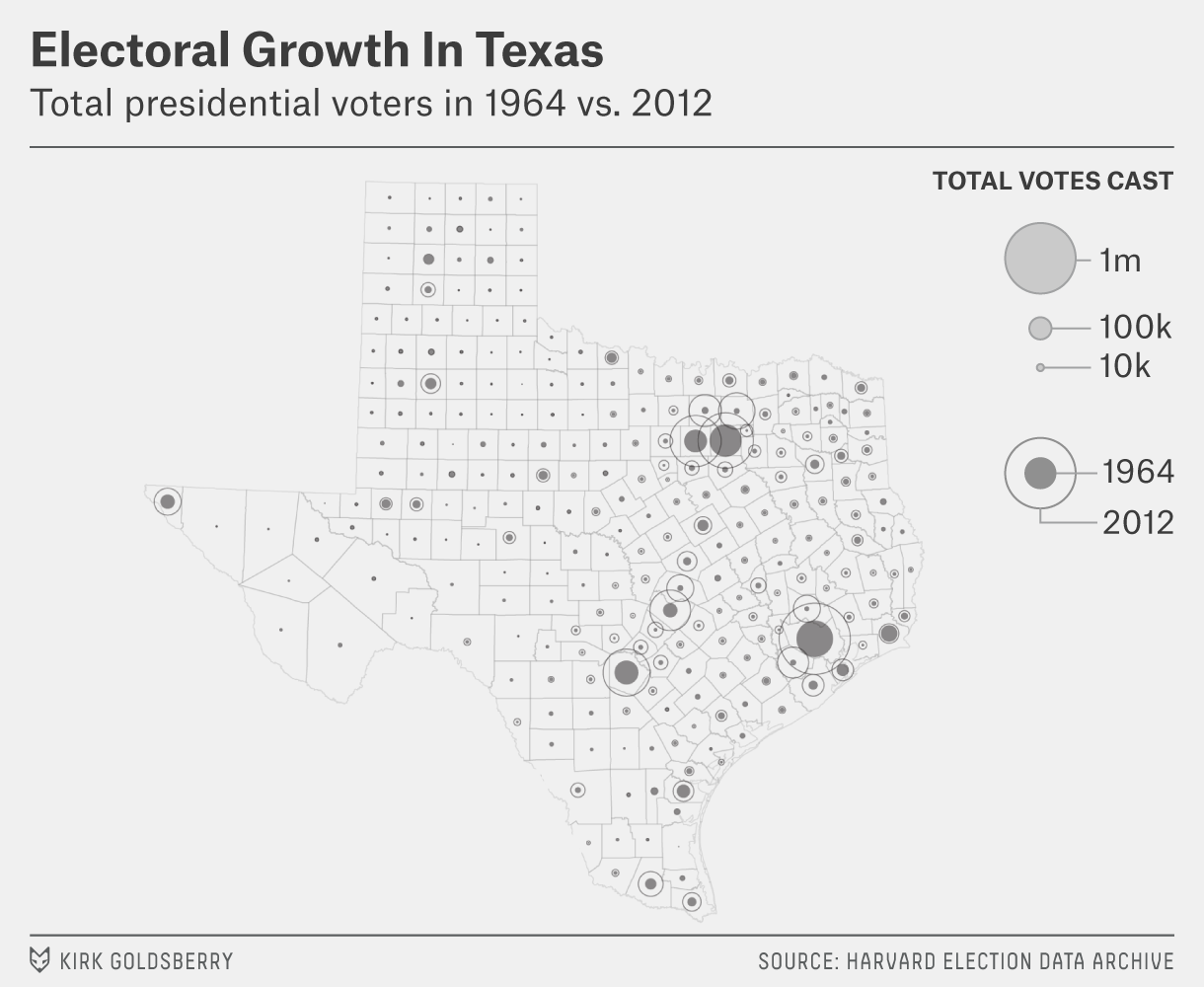 Houston shows us the bipolarization of Texan metro areas; it’s the largest city in the state and the fourth-largest in the U.S. It’s in Harris County, which is the only county in Texas that had more than 1 million voters in the 2012 presidential election. Still, despite that massive electorate, the county as a whole lacks a clear political lean. In 2012, Obama won 49.39 percent of the vote, and Romney won 49.31 percent.

But that narrow margin is deceptive. Sure, Harris remains evenly split, but a closer look at Houston itself demonstrates that its political leanings — at least on a neighborhood level — tend to be bipolar; its suburbs lean right while the urban core leans left. This is not unusual by any means, but it’s an effect that’s not only constant statewide, it’s also Texas’s most important electoral phenomenon going forward. As the state becomes increasingly city-oriented, its elections will increasingly come down to urban and suburban voters. And if Houston serves as a guide, these two groups currently have different tastes in politicians.

So, while the census offers evidence that suggests the state is urbanizing at breakneck speed, thanks to differences in voter turnout, its electorate is suburbanizing. That, at least according to recent elections, is not great news for Democrats. 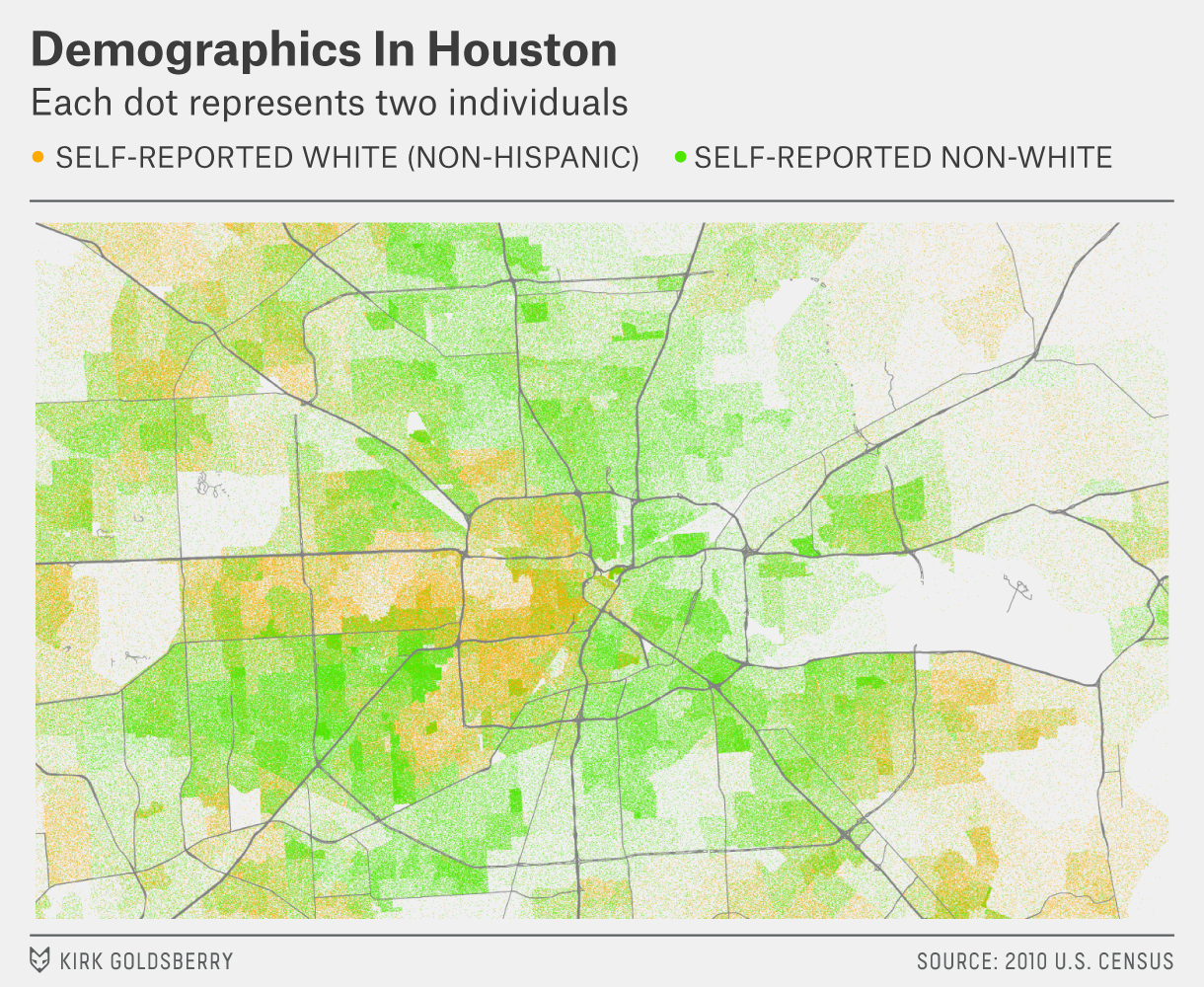 Looking at Houston through this lens reveals that race and political lean seem to be intertwined. But how can people living so close together exhibit such drastic differences in political favoritism? 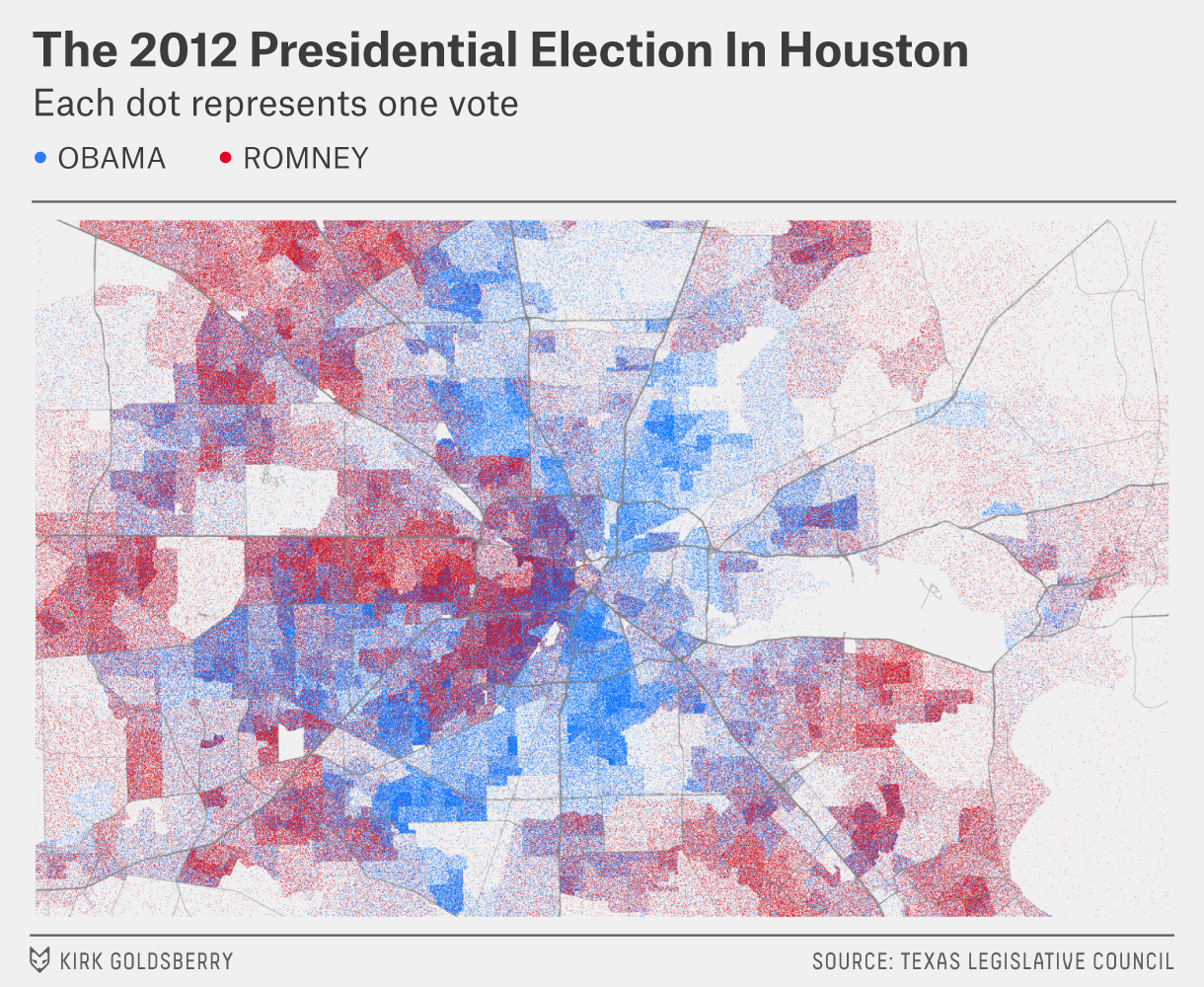 Houston’s intra-city dichotomy may seem extreme, but it’s not unusual. According to some political scientists, it could be a manifestation of a phenomenon know as “group threat” or “racial threat.” According to Ryan Enos, a professor of government at Harvard University, “it actually goes all the way back to the 1930s, when the political scientist V.O. Key noticed that white voters living in close proximity to blacks were more likely to turn out to vote and to vote for conservative Southern Democrats than whites living further away.”

Of course, any conversation about racial distribution in Texan cities in 2014 must include Latinos. To that point, Enos said, “there’s very good reason to believe the phenomenon would exist with white proximity to Latinos as well, which might explain a lot of what is going on in Texas.” So, although many are pointing to the increasing diversity of cities as a sign that Texas may change political hues, according to Enos, it’s that same diversity that’s causing some urban and suburban white voters to become more conservative.

In Dallas, we see a different expression of the same basic sentiment: a relatively diverse blue core decorated by an overwhelmingly red suburbia. The subset of Dallas-Fort Worth captured in the map below includes 927 voting precincts and more than 800,000 voters. 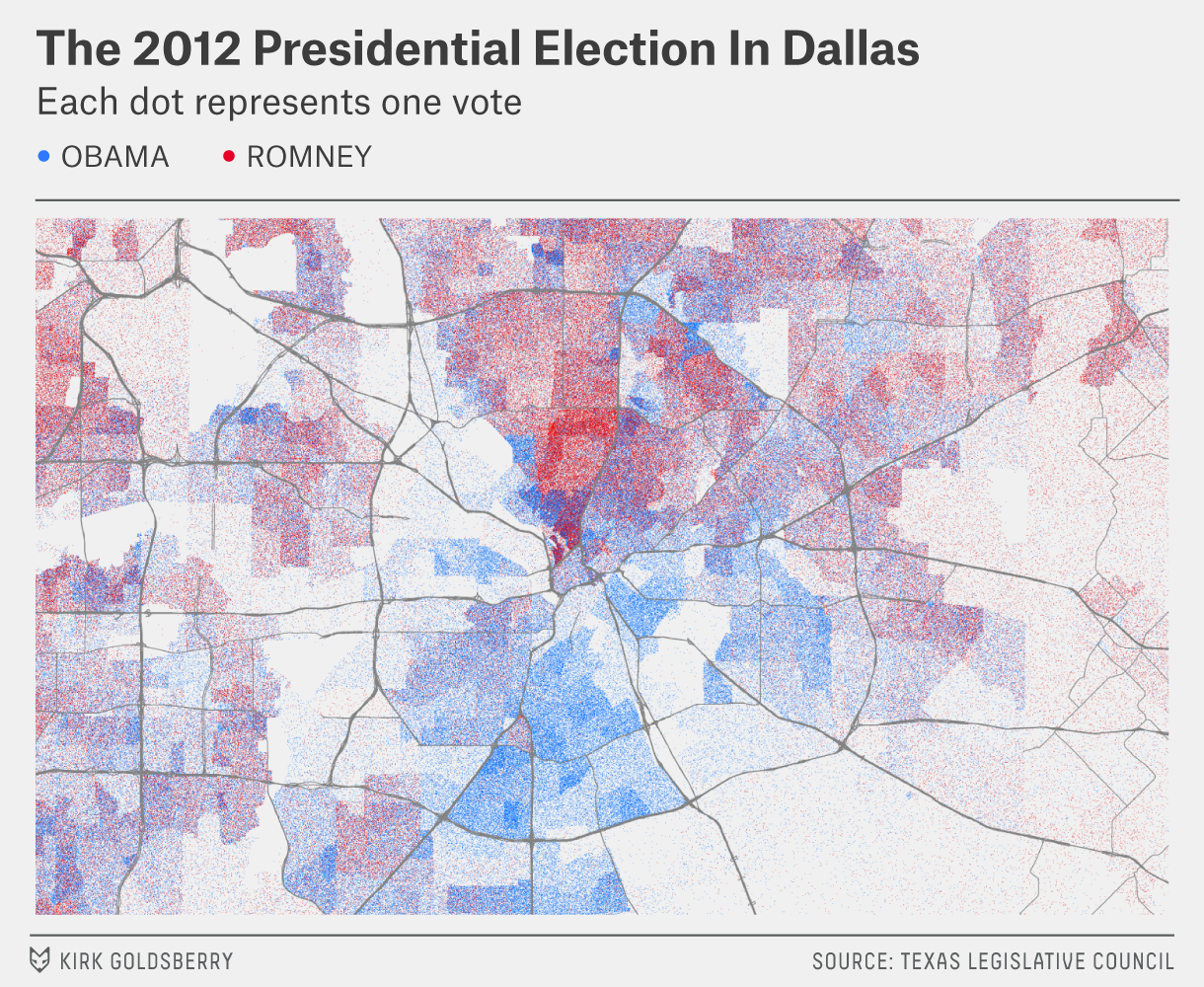 In 2012, Obama won this area by taking 54 percent of its votes, which would make Dallas the most Democratically friendly city in Texas if it weren’t for the hippies down Interstate 35 in Austin.

Austin has been called the blueberry in the bowl of tomato soup. The state’s capital has long been its bastion of left-leaning politics. But Austin is becoming more than just a place to see Joanna Newsom play her harp on top of a taco truck; it’s one of the fastest-growing cities in the country.

Still, even Austin has some of that redness in its suburban, affluent west. 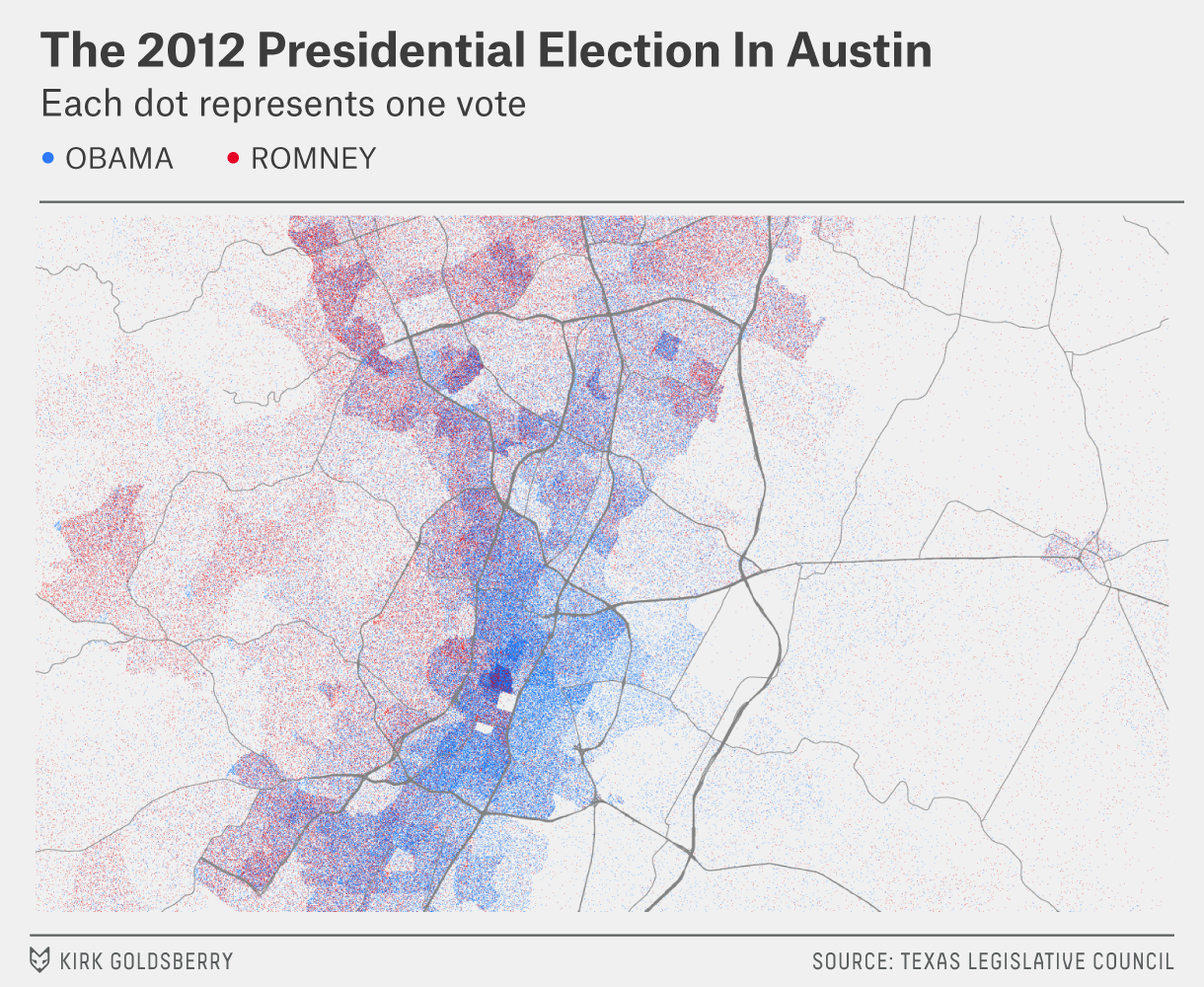 So, the most densely populated areas in Texas are increasingly diverse, Democratic and relevant, but that’s only part of the story. They’re only kind of blue, and their relevance remains hindered by a general lack of electoral engagement that is unmatched in their surroundings. Assuming rural Texas remains staunchly red, Democratic candidates won’t win Texas until they win over suburban voters. Texas is red. 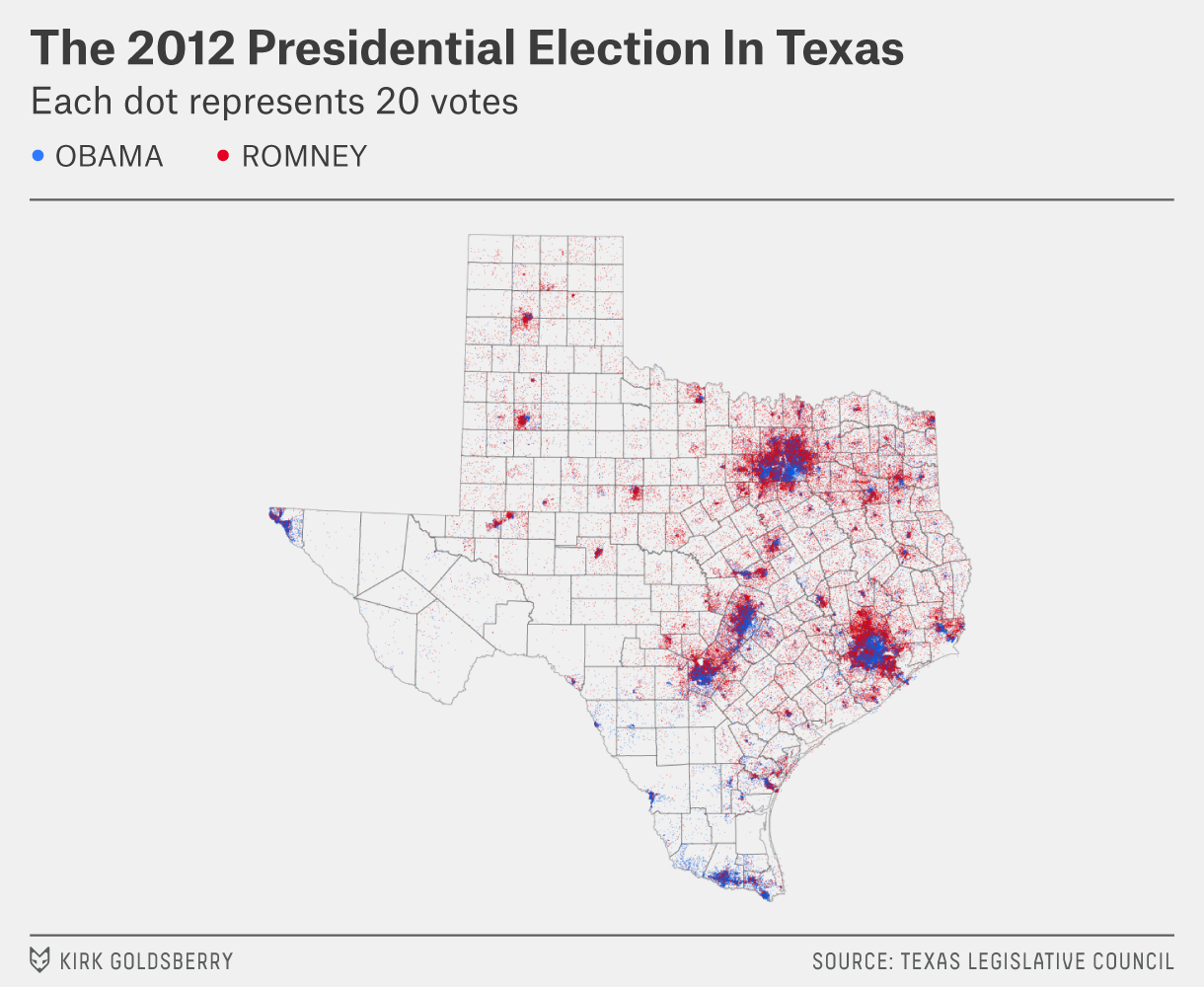 Republicans have won Texas in 10 of 12 presidential elections since the Civil Rights Act, and it’s been 38 years since any Democratic presidential candidate won Texas’s electoral votes. It’s hard to believe that whoever represents the Democrats in 2016 will be transformative enough to change that.

CORRECTION (Nov. 4, 11:12 a.m.): An earlier version of this article misidentified Wendy Davis as a state representative. She’s a state senator.