I’m hoping to be able to do some cool stuff for you guys regarding votes in the Congress once business gets underway next month. Toward that end, I’ve been playing around with various ways to represent the new Congress geographically — and this is what I’ve come up with so far: 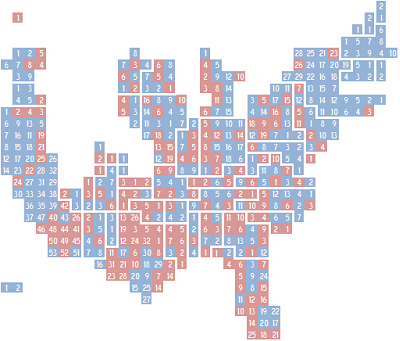 For those of you who haven’t had your morning coffee yet, the little numbers represent the respective Congressional Districts in each state.

There are, obviously, a couple of different trade-offs at play here. On the one hand, you’d like the the shape of each “state” to bear some resemblence to its real-life counterpart. On the other hand, you want the states that share borders in real life to also share borders in the cartogram. And furthermore, it would be nice to have the Congressional Districts within each state in some sort of reasonably representative geography — which isn’t easy in a state like New York where three-quarters of the districts are in New York City and its immediate suburbs.

Accomplishing all of those things with one cartogram is, I’ve determined, probably impossible; the example I’ve provided cheats by creating a sort of warp zone between Minnesota/Iowa and North/South Dakota. Still, I think it gets the job done by and large.