Wading into a discussion about the stock market is dangerous business. In contrast to politics, where there are relatively few people willing to do serious quantitative analysis, there are entire industries full of such geeks in the financial sector. Still, the performance of the markets is something I think about a lot. It’s something I have to think about because the stock market is increasingly being used — often wrongly or disingenuously — as a proxy for the success or failure of the Obama administration. 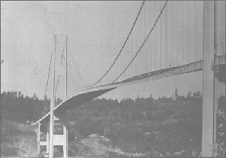 Perhaps the core question in analysis of the stock market are whether such markets are informationally efficient. This is basically the same as asking whether the behavior of stock market is predictable. Predictable behavior in the performance of the market — patterns, that is — imply that it is not efficient, since those patterns represent information that investors are neglecting to use. For example, if a stock priced at $10 per share today can reliably be expected to be priced at $11 per share tomorrow, then something is wrong, since other investors should have detected this pattern and should have bid the stock up to $11 (or $10.99) in the first place.

Here is a perhaps the most basic question along these lines: if the stock market goes up today, is it more likely to go up tomorrow?

What’s interesting, however, is the nature of this correlation has changed over time. From 1946 through 1979, the market posted a gain about 57.7 percent of the time following a gain on the previous day — but just 45.6 percent of the time following a loss. This suggests that the market was slow to react to new information, with rallies or slumps sometimes taking several days to play out.

You might expect that as information flow improved throughout the 1980s and 1990s, particularly with the increasing availability of cable news and computerized trading, this pattern would tend to dissipate. And you’d be right. Between 1980 and 1999, he market posted a gain 51.8 percent of the time following a prior day’s gain, versus 52.7 percent of the time following a loss — essentially no difference. The simple arbitrage opportunity available in previous years — assume the market will do tomorrow what it did today — would no longer make you any money. 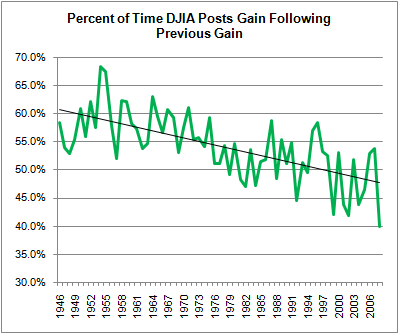 In contrast to the phenomenon of positive day-to-day correlations in stock market returns, which can plausibly be explained by slow-moving information (you find out on Wednesday what your stockbroker found out on Tuesday — therefore, a stock that goes up on Tuesday tends to go up on Wednesday), these inverse correlations are more perplexing. Perhaps the market is routinely overreacting to information — when a news event merits a correction of X in a certain company’s stock price, its price instead changes by X + 20%. Perhaps it is the result of program trading: a certain series of algorithms designed by a hedge fund, which might perform well if left to its own devices, could begin to behave oddly in the presence of other such algorithms which are seeking to do the same thing.

Either way, the whole thing is a bit disquieting. The stock market is sometimes described as a drunkard’s walk, which implies that it moves about seemingly at random. But real drunkards do not walk at random: instead, they tend to wobble, lurching from one side of the sidewalk to the next in a way that in fact is somewhat predictable. That is more the way that the stock market has tended to behave in recent years.