The Democrats may be steadily losing ground in the generic congressional ballot, and may either break even or suffer a net loss of a seat or two in the Senate next year. But there’s little reason to suspect right now that they will lose majority control of either chamber. 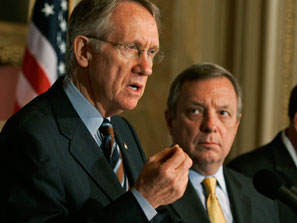 But they may lose their Senate Majority Leader, Nevada’s Harry Reid. As Nate noted in his latest Senate rankings–despite lots of cash on hand for Reid, Nate rates Reid’s seat fourth most likely to change partisan hands–Reid is trailing some relatively obscure Republicans. (It should be noted for non-NCAA basketball fans, however, that Republican candidate Danny Tarkanian, the son of former UNLV head coach Jerry Tarkanian who leads Reid by 11 points in the latest poll, has the benefit of some built-in name recognition in the state.)

Ed Morrissey raises some interesting questions after reminding us that Reid…

…would be the second Democratic Senate Majority Leader in a row to get thrown out of office by his own constituents (Tom Daschle got a compulsory retirement from South Dakotans), and he can’t allow that to happen by default with a retirement. The embarrassment would permanently damage the Democratic agenda in the Senate and take what little luster remains of the Obama administration. The Democrats have to fight for Reid, which makes the stakes even higher for them-—and the embarrassment even worse if he loses.

Will Reid try to save himself by retreating on ObamaCare and cap-and-trade? Normally I’d guess yes, but I’m not sure that Reid will get the luxury of listening to his constituents. If he wants a big Democratic Party rescue, he’ll need the national interests pushing for both big agenda items, especially the unions and the hard-Left organizers. Without them, he’s sunk, big warchest or not. Also, he’s probably boxed into the Obama agenda thanks to his actions this year and the yoke he shares with Nancy Pelosi and Obama. It’s probably too late to salvage independents in Nevada already.

What happens if Reid loses? Dick Durbin (D-IL) would almost certainly take the helm from Reid, which may not be a good outcome for either Republicans or Democrats. Nevadans apparently believe that they can get addition through subtraction, however, and Reid looks likely to exit after 2010, barring some electoral miracle in his state—-a very expensive miracle that might soak up all of the money needed to fight other midterm battles.

Obviously, the big problem for Reid is that he is majority leader, which means he doesn’t have the benefit of political cover from national trends, or any disappointment or disapproval of the Obama Administration. The former boxer is trapped in the corner of the ring by his prominent position.

But in my view, precisely because he can’t duck or run like a Ben Nelson or Mary Landrieu, Reid may as well be more aggressive as a national leader, whether on health care or other issues. Otherwise, he looks like a weak leader relative to his fellow Democratic president and the Senate Democrats he leads. Conservatives, who are delighting in the new poll numbers and calling for his head, aren’t going to vote for him anyway, so he can’t afford to lose Democrats and independents by appearing soft.

A bit of toughness from the former pugilist, coupled with that huge cash advantage and support from unions and national organizations and Democratic Senatorial Campaign Committee resources, ought to be enough to save his seat. Whether he should, or would want to, remain majority leader after that is another matter.