For fans, it’s been a difficult several years since “Magic” Mike Lane left the male stripping industry in 2012, but like a phoenix with magnificent pecs, the Channing Tatum character returns in “Magic Mike XXL,” out today. Our time in the desert has come to an end. Mike is making a comeback, and so is the strip-club industry.

The “Magic Mike” universe is based on Tatum’s own time as a stripper, and the best data I could find indicates that it’s a pretty accurate telling of the financial and social realities of the stripping business.

First, a synopsis, for those unfamiliar with the first installment: Tatum plays Mike, a Tampa construction worker who moonlights as a stripper in a club run by a man named Dallas (Matthew McConaughey). He recruits a friend to join the crew of male dancers, assorted hijinks happen, and eventually Mike leaves the industry to pursue his dream of starting a furniture business. But that isn’t the end of this story. In the sequel, the crew is now going on the road to an exotic-dancing convention.

Stripper road trip aside, the “Magic Mike” franchise is a pretty good window into the world of live adult entertainment for women. I got an August 2014 industry analysis produced by IBISWorld, a market research firm, all about the financial mechanics of the strip-club business so we can see how the club from the first film, Xquisite, compares.

About 5.3 percent of the $6.18 billion generated in revenue by strip clubs in 2014 came from women. While that part of the market is dwarfed by the male-targeted side, that still means there’s a $328 million market for male strippers. Women are described by the analysts as a “small but growing market” for strip clubs. Bachelorette parties and birthdays appear to be the core clientele, according to two descriptive studies I found.

It turns out that Dallas picked a good business — there’s a lot of money in running an exotic dancing show once you get past the regulatory hurdles.

According to IBISWorld, strip clubs make about half their money from merch, food and alcohol. The vast majority of the rest comes from “service revenue” (more on that in a second), with about 6 percent from other charges like valet parking and ATM fees.

“Service revenue” refers to dances, VIP room rentals and cover charges at the door. In the film, Xquisite’s owner is pretty unscrupulous. He screws over Mike financially when it comes to his stake in a new club in Miami even though the business is doing well because of Mike’s star power. We don’t know how often the owner-dancer relationship turns sour over money in the real world, but IBISWorld estimates that on average, strip clubs keep 25 percent of the money made from each dance.1

Dallas probably didn’t have to rip off Mike to make his money, but he picked a good time to expand the business. The average profit margin for strip club businesses rose to 19.1 percent in 2014 from 15.5 percent in 2009 across the industry.

Mike has pretty solid business instincts, too. Look at how the industry fared between when he joined, when he left and when he signed back up. We see Mike may very well be magic. 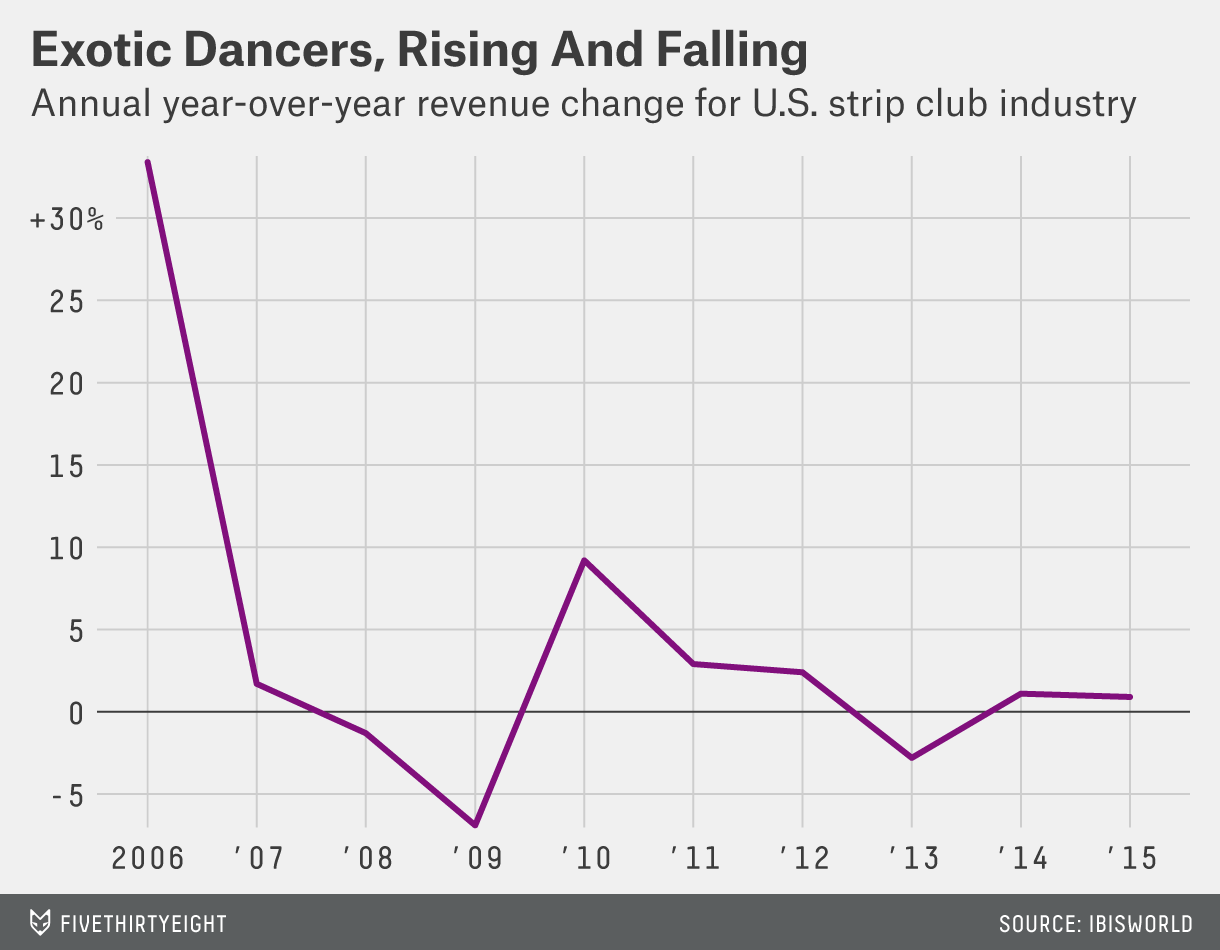 The revenues of the stripping industry are closely tied to how much discretionary income Americans have. Getting his start in 2006, Mike became a stripper in a year in which the industry overall had a staggering 33.4 percent increase in revenue compared with the year before. While 2008 and 2009 were lean years because of the recession — revenue fell 8 percent from 2007 to 2009 — between 2010 and 2012, Mike danced as the industry rebounded quickly. It was super intuitive of him to quit right before 2013, when revenue would contract 2.8 percent. And hopping back into the scene in 2015 was good timing, too; the industry is forecast to grow 1.5 percent year over year through 2019.

While money drives a lot of the plot in “Magic Mike,” the movie is also realistic from a social standpoint. For a 2003 study out of Old Dominion University, researchers talked to both men and women who were exotic dancers around Virginia. The sample size isn’t huge — only 16 male dancers were interviewed — but a lot of the experiences they described are also shown on screen.

Mike recruits a friend, Adam, to become a dancer. According to the Old Dominion study, about 89 percent of all the dancers interviewed said they would recommend the profession to a friend; all the guys said they would. Mike and the guys in the movie all have day jobs, which seems true to life — only two of the 16 men interviewed said dancing was their primary source of income.

Hooking up with customers — a distinct trend in the film — was slightly more rare in real life, but three-quarters of the men said they had dated a customer at some point.

Am I saying “Magic Mike XXL” is going to be an educational experience? If it’s anything like its predecessor, it very well may be. So go see it, and if anyone asks any questions, just say you’re trying to learn about a growing and crucial part of the American economy.