At the end of the 2014 season, the Houston Astros had improved from being a floating pile of garbage in the Pacific Ocean to a modest landfill in New Jersey. After losing more than 105 games in 2011, 2012 and 2013, a 70-92 finish in 2014 was both a welcome change for fans and a sign that GM Jeff Luhnow’s scorched-earth plan might actually be working.

The Astros have taken an aggressive approach to rebuilding since Luhnow took over in 2011. Not interested in the traditional lumbering process of retooling, Luhnow ostensibly sold off any player he could in exchange for even the fringiest of prospects and salary relief. Payroll plummeted from almost $77 million in 2011 to just $26 million in 2013. The most the Astros paid a player in 2013 was $5 million to Wandy Rodriguez. The thing was, Rodriguez was pitching for Pittsburgh at the time (the Astros agreed to cover part of his salary when they traded him for a trio of of middling prospects in 2012.)

This approach led to some horrendous teams, a small group of promising prospects, and a combination of high draft picks and a good deal of bonus slot money. The Astros told their fans to trust the process, that it had to get worse before it got better. This sounded all well and good on paper, but it was hard to imagine just how bad the Astros would actually get. Still, 2014 saw improvements in the major league club as well as a glimpse into the future as some of their better prospects started making a name for themselves.

When it was time to prepare a roster for the 2015 season, the Astros made further moves to upgrade. Perhaps this was to appease the remaining fans of a recently disgusting baseball team, or to shut up national columnists who had taken umbrage at Houston’s radical approach. Perhaps it achieved a little of both. Either way, it was a surprise to see a team with a record of trading any player with a modicum of value pivot to signing and trading for actual major league talent. That’s how Houston got into the Luis Valbuena business. The previous tenant of third base, Matt Dominguez, had gone from being a glove-first prospect with some power to being a corner infielder with a 63 wRC+ (that stands for weighted runs created plus, a measure of a player’s total offensive value, with 100 being league average) and a -11.9 UZR/150. (UZR, or ultimate zone rating, is a measure of defensive ability. Anything below a -10 is an embarrassment.) Dominguez’s performance indicated that a change was needed at the hot corner.

The Astros dipped into their deep pool of toolsy outfielders and sent Dexter Fowler — who had been traded to the Astros just one offseason before — to the Chicago Cubs for pitcher Dan Straily and third baseman Valbuena.

Valbuena was coming off a serviceable 2014 season, logging a 116 wRC+, and though his defensive numbers weren’t on par with his 2013 season, he came in just a shade below average with the glove. It seemed like a logical move: put a competent player at third and let the young core of players grow around that. And by the numbers, Valbuena has performed more or less competently. He’s just doing so in a very strange way.

If it seems odd to see a player hitting .2031 described as competent, trust me that it feels just as odd to write. But buried in that .203 average are 19 home runs, the most of any Astros player and tied for seventh-most in the American League. Although Valbuena hasn’t yet crossed into Sylvester Coddmeyer III territory, an unusually large chunk of his hits have left the yard.

This table gives the 20 highest percentages of home runs per hit, since 1985, for players with at least 19 home runs. 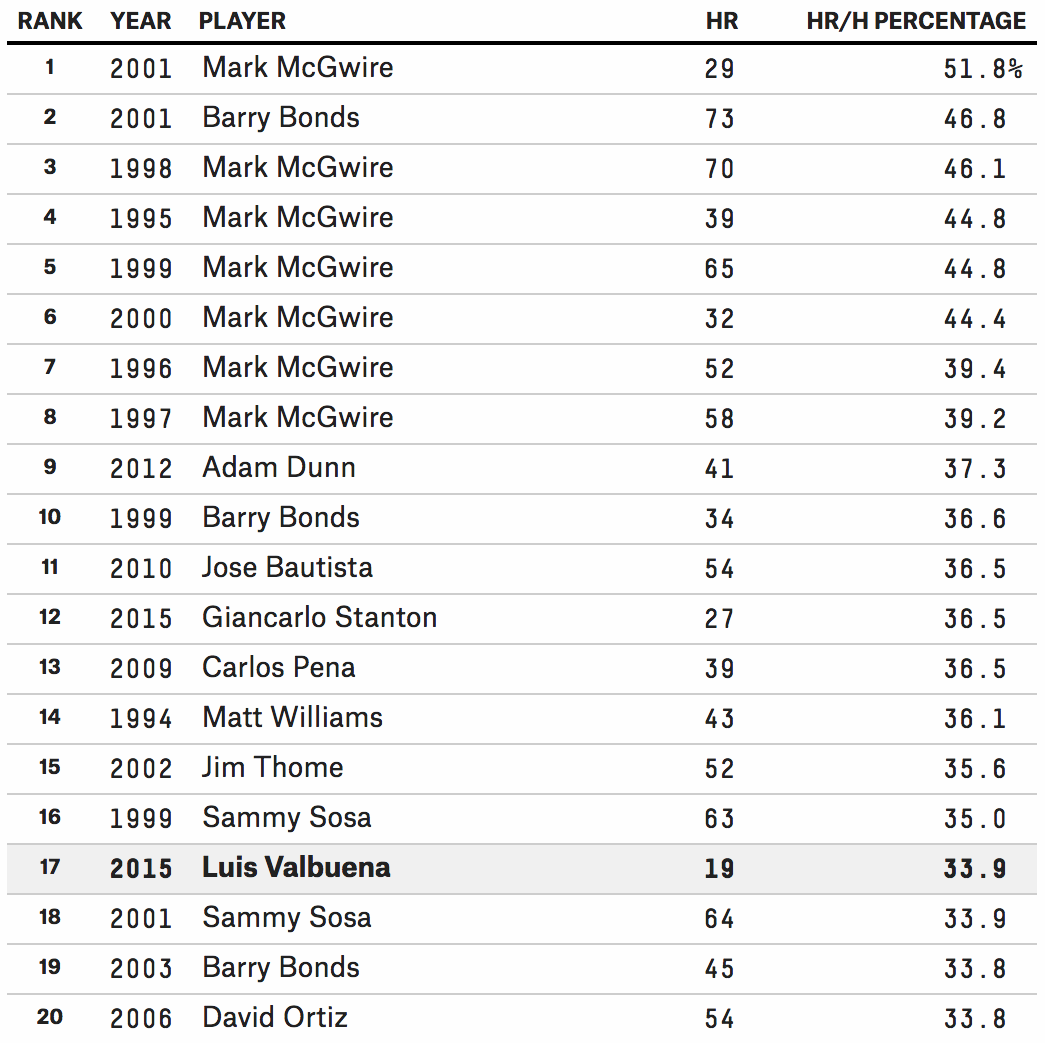 This list consists of big boppers — and Luis Valbuena. You wouldn’t expect to see him on many lists that include Barry Bonds three times and Mark McGwire seven.

Nineteen home runs is certainly a career high for Valbuena, and his .236 isolated power average (slugging percentage minus batting average — a measure of extra-base hits) beats his 2014 number by 50 points. But in the middle of those impressive power numbers, he appears to be struggling. His on-base percentage is .286. His walk and strikeout rates have gotten worse. Even with his high power numbers, his slugging percentage is only three points better than it was in 2014 thanks to his low average.

Here is that above chart again, but this time it shows players’ corresponding wRC+. 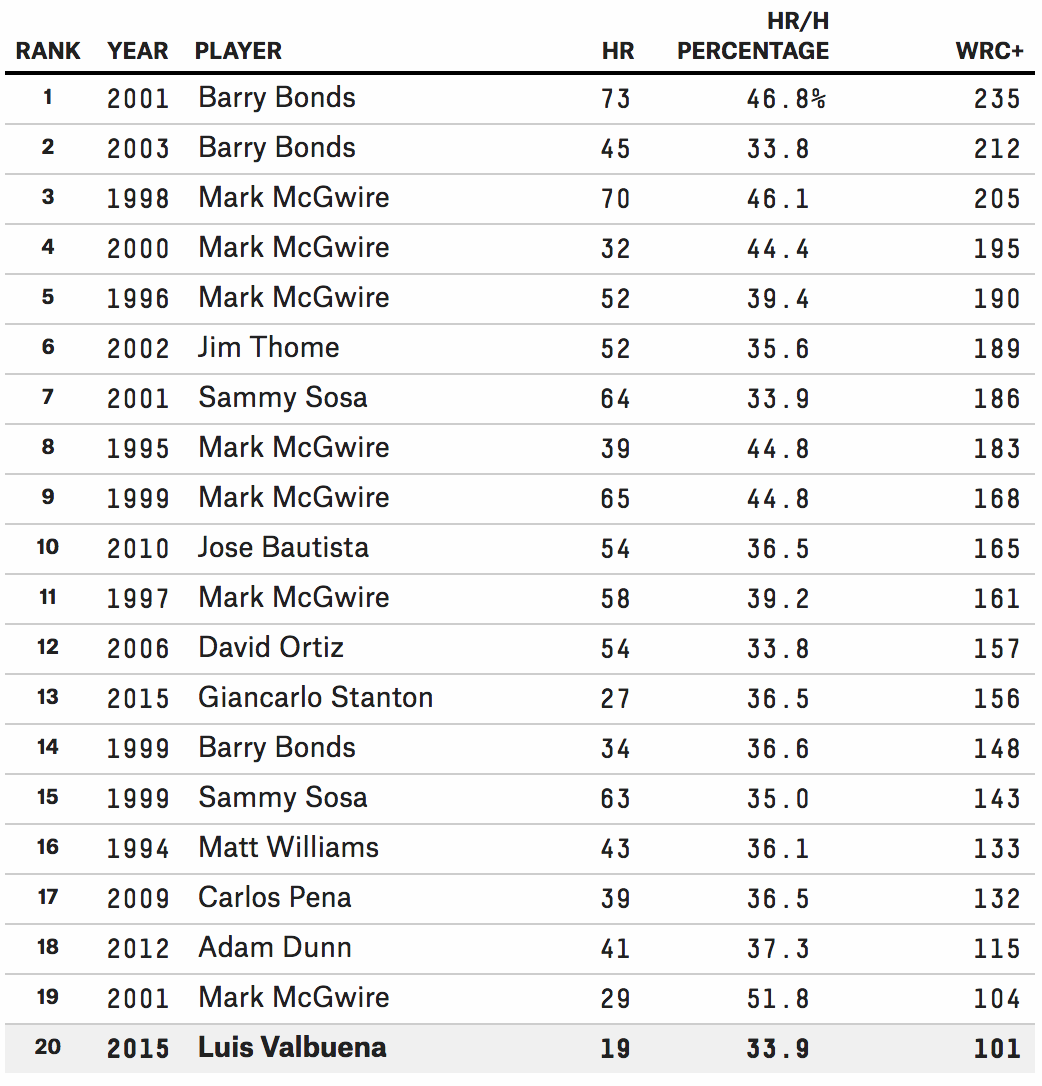 With the exception of McGwire’s weird 2001 season, Valbuena is the only hitter flirting with league average. Hitters with a high home run percentage should put up good offensive numbers. Even the Three True Outcome players like McGwire, Dunn, Bonds, Thome and Sammy Sosa (all of whom generated large numbers of walks, strikeouts and home runs) have produced at an above-average level thanks to their abilities to get on base and hit for power. Valbuena has a 9.3 percent walk rate this season. He’s a Two Outcome player right now. Yet he’s keeping his head above the league-average water thanks to his home run total and the relatively weak crop of AL third basemen (one wonders how many points his wRC+ would jump if Josh Donaldson were playing in the NL.) 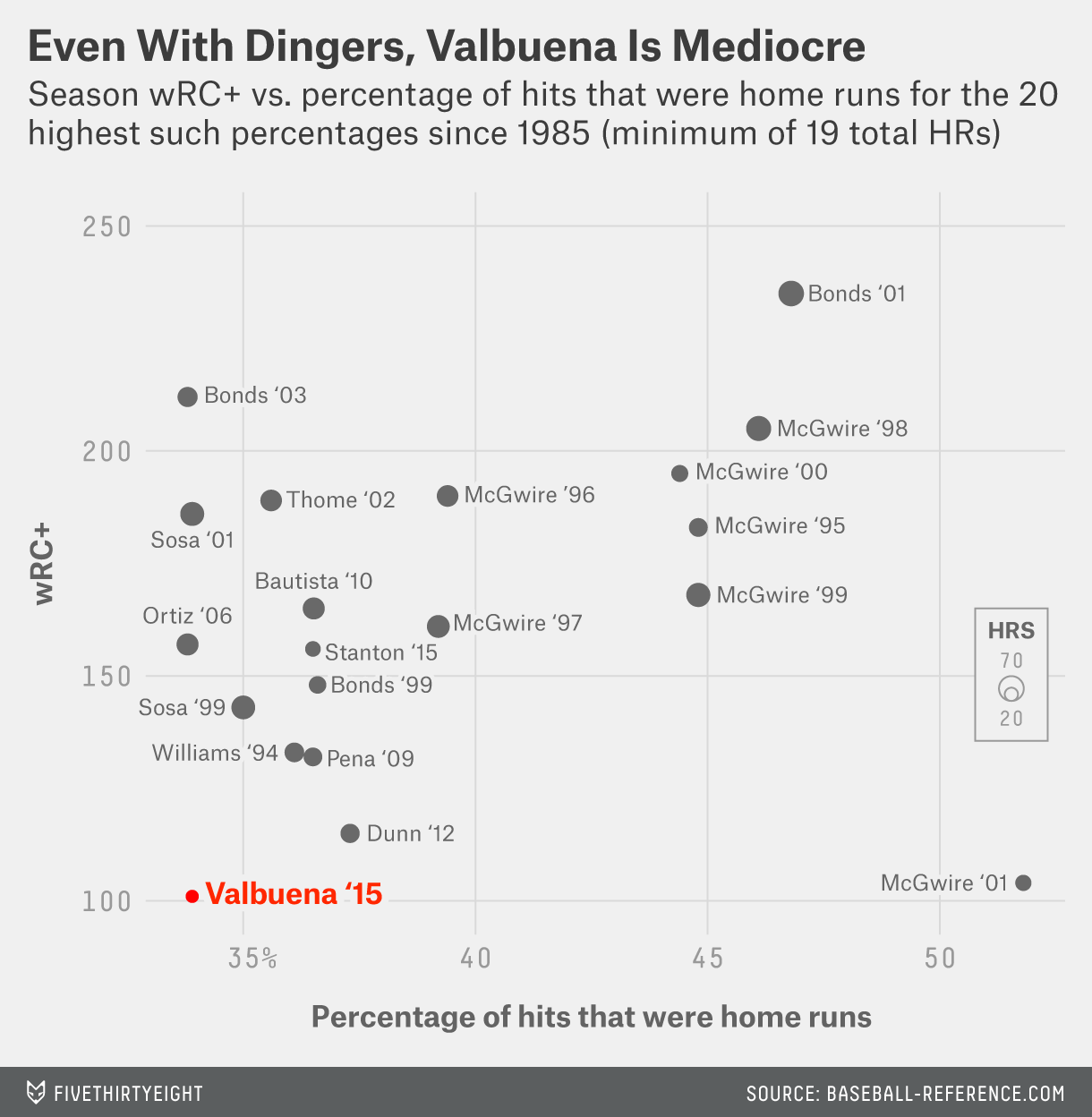 A big factor in Valbuena’s weak season is BABIP (batting average on balls in play, which shows how often a ball in play becomes a non-home-run hit). Valbuena’s BABIP stands at .196, which is crazy low. McGwire’s 1997 season was the only other of our group to log a BABIP below .200. This isn’t a function so much of luck as of Valbuena’s high fly-ball rate. More than 48 percent of Valbuena’s batted balls this year have been fly balls. Usually, if fly balls aren’t clearing the fence, they’re getting caught.

Valbuena’s ratio of home runs to hits is so high in part because very few of his other batted balls are dropping for hits. If all of his home runs dropped for doubles instead, his BABIP would be higher, yet his batting average would be the same (and his wRC+ would be much lower). If he had 19 more doubles and 19 fewer home runs, his BABIP would be .267, yet his average would remain at .203. No qualified hitter has had an average less than or equal to .200 and a BABIP greater than .266 for a season. Melvin Upton Jr. came close in 2014, with a .208 average and .286 BABIP.

Jed Lowrie, another 2015 pickup for Houston, is expected to come off the disabled list after the All-Star break. His normal shortstop position has been taken over by some kid named Carlos Correa, so he and Valbuena could platoon at third for the remainder of the season. This may very well kill The Weird Season of Luis Valbuena: The Astro Who Only Hit Homers. It would most likely be good for the Astros, but bad for those of us who love baseball oddities. So it goes. To (terribly) paraphrase Rick Blaine, we’ll always have the first half of 2015.