The second season of the National Women’s Soccer League (NWSL) starts April 12, which will be about the time people ask, “There’s a professional women’s soccer league?” Yes, there is: It’s the third attempt since 1999 at professionalizing women’s soccer in the U.S. The previous two leagues both folded after only three seasons, so to say that Year 2 is crucial for the NWSL’s survival would be an understatement.

This season also carries the added pressure of needing to be really competitive in the run-up to summer 2015’s FIFA Women’s World Cup in Canada. If the U.S. national team hopes to have the best shot at the World Cup, it needs to be playing at the highest level. That means the rest of the players in the league (those who won’t be going to the World Cup) need to be very good. But it isn’t easy to entice international talent (or even domestic talent) with the lurking ghost of two failed leagues and a salary that typically ranges from $6,000 to $30,000 (with most players seeing the lower end of that range).

Herein lies the biggest problem for the NWSL: To keep the league afloat, it is paying preposterously low salaries. And who can afford to play professional soccer for $6,000 per year? Mostly women in college or only a few years out, as well as those with minimal national-team-level experience. And though this modest budget has helped the league’s bottom line, it has made it more difficult to attract high-level players — well, high-level players who are not members of the U.S. national team.

When the NWSL was organized, U.S. Soccer, the sport’s governing body, agreed to subsidize the salaries of U.S. national team players — typically the best and most expensive players in the league. Last year, the Canadian and Mexican federations agreed to do the same, so the league evenly allocated all national team players among the eight teams. (A ninth team, the Houston Dash, was added this year, so many players were reallocated.)

On Wednesday, each team had to cut its roster to 25 players, with five more cuts to come before the season begins. We wanted to look at the distribution of talent in this season’s player pool to see who is trying to play professional women’s soccer. Below is a chart that illustrates the relative experience and age of the 228 players who remain (not all teams had released their roster cuts by Wednesday’s deadline): 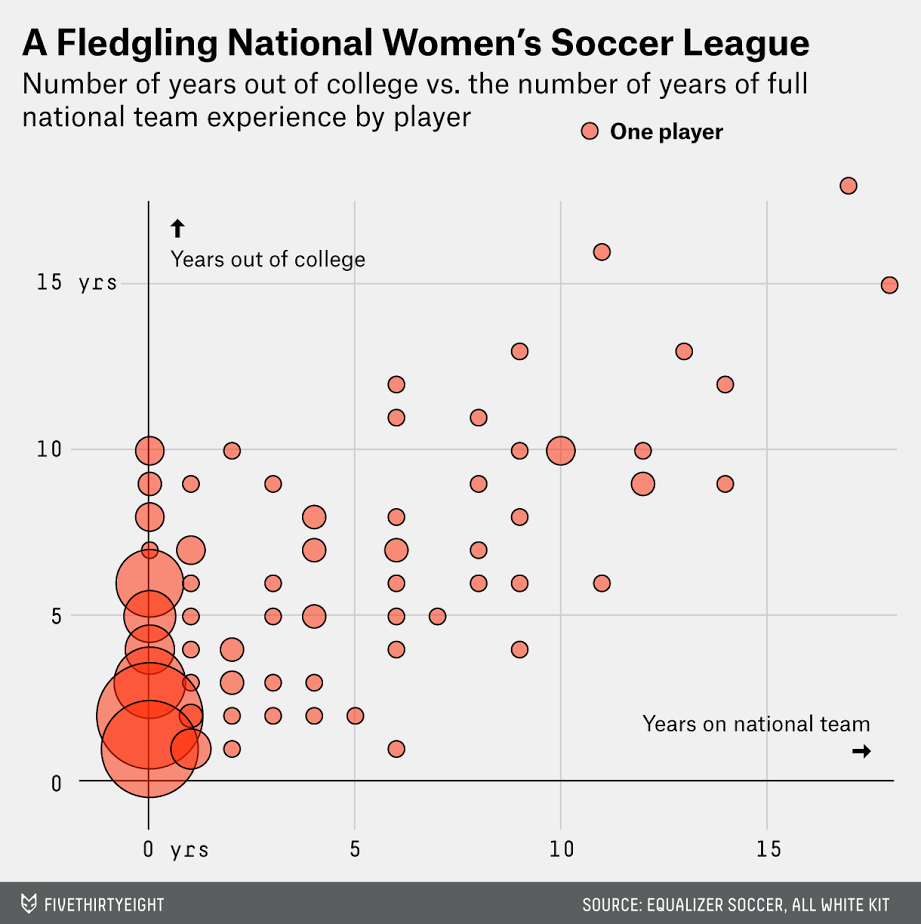 We counted one year out of college as finishing collegiate soccer in 2013, although technically these players are still in college (most are just about to graduate). For national team experience, we counted the number of consecutive years a player appeared in the full national team player pool. This data does not reflect international players who did not play college soccer and also probably over-represents younger players who are more likely to be released when the final rosters are cut to 20 in the coming weeks.

This data doesn’t speak to the longevity of a player’s career, which varies wildly by individual. The data also doesn’t mean that a freshly graduated collegiate player is any worse or better than Christie Rampone, the league veteran with 17 years of national team experience. There are wunderkinds in every sport, but overall we think that more professional experience probably means more talented players.

The main thing the data illustrates is that the NWSL is skewing young and inexperienced, which might have more to do with finances than soccer ability. For most players, and people in general, there are only so many years you can do the thing you love on a $15,000 annual salary before you have to move on.