Continuing to build upon the two previous posts (here and here, with Ed Kilgore adding more here) about the Partisan Voting Index results from 2008, let’s look next at where the so-called “divided districts” are located across the country. Again, and as depicted in the best-I-can-do-as-Blogger-rookie-chart below, there are 49 “McCain Democrats”–that is, districts John McCain carried but won by and represented presently by House Democrats–and 34 “Obama Republicans” the other way around. 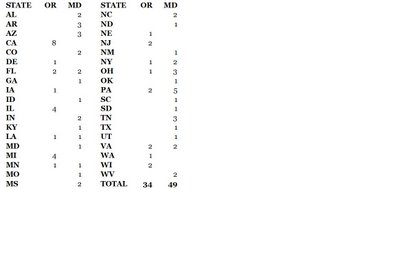 Overall, those 83 districts are located in a total of 37 states; AK, CT, HI, KS, MA, ME, MT, NV, NH, OR, RI, VT AND WY have none. Of those 37, 21 states have one or more McCain Democrats (hereafter MD or MDs) but no Obama Republicans (OR/ORs); nine feature only ORs but no MDs; and seven have some combination of both.

The assumption is that the OR districts are potential Democratic pickups, because obviously some people voted for the Democratic presidential nominee despite voting for their Republican House candidate. Not all are automatic targets, as we’ll discuss in future posts when we examine district-by-district results. In any case, almost half of these districts, 16, are located in just three states: California (eight), Illinois and Michigan (four each). More revealing is the fact that 13 of the 37, more than a third, are located in midwestern states. As everybody knows by now, the Democrats have consolidated their control over northeastern House districts, with all of the 22 districts in the six New England states, plus all but 3 of New York’s 29, now that Scott Murphy has held Kirsten Gillibrand’s vacated seat. The Midwest is clearly the region where Democrats have yet to maximize their House control. Given that this was the most competitive region in the past three presidential contests, this is hardly a surprise. That the Democratic president hails from the region’s largest city doesn’t hurt, either.

As for Republican opportunities, of the 49 MDs more than a third (17) are in just five states: PA’s five, plus four each in AR, AZ, OH, and TN. Obviously, Arizona is an exceptional case, given McCain’s home state advantage there; so the McCain Democrats there may be safer than they appear, particularly Harry Mitchell (AZ5) and Gabby Giffords (AZ8), who are sophomores that elected in 2006 who already won re-election in 2008. Rookie Ann Kirkpatrick (AZ1) might be a different story–had she not won her seat by a wider margin than either Mitchell or Giffords. Notice that, perhaps not coincidentally, the remaining four states all contain parts of the much-discussed Appalachian counties that provided better margins for John Kerry in 2004 than Barack Obama last year. If there is a place for Republicans to start a comeback, it might be those areas where they can build upon general wariness toward Obama.

In the next post I’ll look at margins in specific districts and what they tell us about the 2010 House races.