OK, yesterday, before I got a basic handle on using Blogger, I started this series of posts by discussing some basic results from the 2008 congressional and presidential elections, as measured by the Partisan Voting Index (PVI) computed by POLIDATA in conjunction with Charlie Cook at the good folks over at the National Journal. You may want to go back to read the first post so this one will make more sense.

Anyway, I mentioned that the House districts for this decade were packed in such a way as to produce too few Democratic-leaning districts, mostly because racial gerrymandering and urban density tends to create majority-minority districts that are safer at the expense of strategic gerrymandering. In any case, here is a plot of the 435 PVIs from 2004: 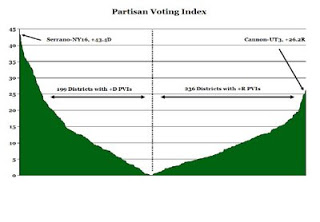 As you can see, the left side for Democrats is a lot steeper than the right side for Republicans. Remember, this is not the margin for the House candidates in those districts, but the presidential performance. So this is not (at least not directly) a function of unbeatable Democrats (or Republicans) running opposed or against a lamb-to-the-slaughter challenger and/or write-in candidates–which is very common in districts represented by racial minorities. Rather, these are lopsided John Kerry or George W. Bush margins in House districts, and one can easily see that there are more such Democratic districts than Republican ones. I do not (yet) have the PVI data in spreadsheet form but hope to soon and can reproduce this chart for the 2008 elections.

Returning to the 2008 results, in April the Journal’s Ron Brownstein and Scott Bland wrote up their analysis of the 83 House districts mentioned in my previous post–that is, the 49 where John McCain won a Democrat-carried district and another 34 where Barack Obama won a Republican-carried district. As they point out, this total is up from 2004’s 59 such districts, and just below the 86 total in 2000. The 2004 total was the lowest since 1944, and 2008 was second lowest, with 2000 not far behind.

There are any number of measures of growing partisan polarity in the country–from mass measures like attitudes on issues or partisan affiliation, to elite or elected measures like unified state governments or party-line votes in Congress. The fact that recent presidential cycles can be characterized by the smallest number of split districts in the past six decades is just one more piece of evidence.

Write Brownstein and Bland: “One reason for the drop in recent years is the increasing sophistication of redistricting software…The trend has also been fueled by a resurgence in straight-ticket voting as each party’s electoral coalition has grown more ideologically homogeneous since the 1960s.” (Translation: Republicans cleared out many moderate House Democrats from the South and Plains states while Democrats this decade finally got around to returning the favor, so to speak, by clearing out House Republicans in the Northeast and Midwest.) And this is why the 2010 elections matter so much, because control over map-making is at stake.