First, there are two employment surveys — the household and the establishment survey:

Data based on household interviews are obtained from the Current Population Survey (CPS), a sample survey of the population 16 years of age and over. The survey is conducted each month by the Bureau of the Census for the Bureau of Labor Statistics and provides comprehensive data on the labor force, the employed, and the unemployed, classified by such characteristics as age, sex, race, family relationship, marital status, occupation, and industry attachment. The survey also provides data on the characteristics and past work experience of those not in the labor force. The information is collected by trained interviewers from a sample of about 50,000 households located in 792 sample areas. These areas are chosen to represent all counties and independent cities in the U.S., with coverage in 50 States and the District of Columbia. The data collected are based on the activity or status reported for the calendar week including the 12th of the month.

Data based on establishment records are complied each month from mail questionnaires and telephone interviews by the Bureau of Labor Statistics, in cooperation with State agencies. The Current Employment Statistics (CES) survey is designed to provide industry information on nonfarm wage and salary employment, average weekly hours, average hourly earnings, and average weekly earnings for the Nation, States, and metropolitan areas. The employment, hours, and earnings data are based on payroll reports from a sample of over 390,000 establishments employing over 47 million nonfarm wage and salary workers, full or part time, who receive pay during the payroll period which includes the 12th of the month. The household and establishment data complement one another, each providing significant types of information that the other cannot suitably supply. Population characteristics, for example, are obtained only from the household survey, whereas detailed industrial classifications are much more reliably derived from establishment reports

Additionally, consider this chart of the unemployment rate from the report: 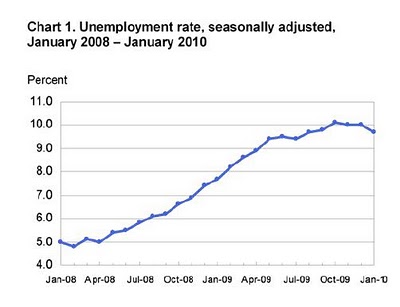 The household survey also provides information about the amount of time people have been unemployed. Consider the following charts as a time series. First, people are laid-off. Then they are unemployed for a certain amount of time. 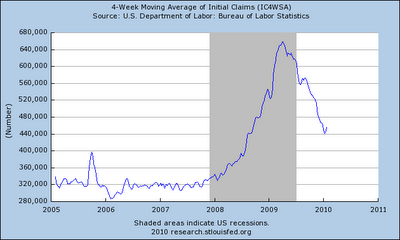 Let’s start with the 4-week moving average of initial unemployment claims (this number is not from the household survey). This number has been dropping for most of the year. However, it rose to a very high level and is currently above levels associated with an expanding economy. In other words, the number of people entering the ranks of the unemployed is decreasing, but it is still at high levels. 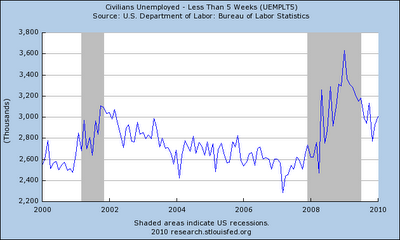 The number of people unemployed for 5 weeks or less is decreasing, and has been for about half the last year. Also note this number is starting to approach the levels associated with an expanding economy (the levels seen between 2002-2008). 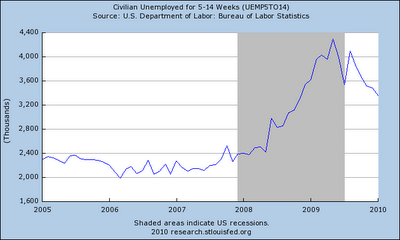 Once someone is unemployed for 5 weeks or longer, the odds are they will remain unemployed for a longer period of time. While this chart of the number of people unemployed for 5-14 weeks appears to be topping out it is still at high levels. Also note this number is far above levels associated with an expanding economy (by about 1 million to 1.2 million), indicating it will take some time to bring it back to healthy/normal levels. 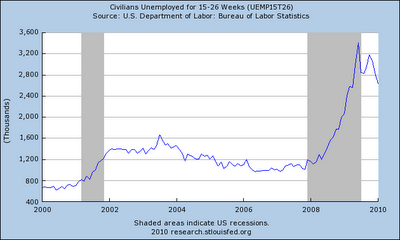 While the number of people unemployed between 15 – 26 weeks appears to be topping out, it is also at high levels that will take some time (as in years) to bring back to normal levels.

And regrettably, the number of people unemployed for over 27 weeks is still increasing.

There are a few other data points from the household survey to highlight. First, consider the following unemployment rates by educational level achieved. The first number is for January 2009 and the second is for January 2010:

These unemployment figures paint a very interesting picture that has profound policy implications. Either the economy needs to start creating jobs for those with less than a college education (a highly unlikely development as will be explained below) or the workforce needs to increase the number of people with higher education.

Here are the same percentages (the unemployment rate for January 2009 and January 2010) of various age groups.

Finally, the number of people who were employed “part time for economic reasons” decreased from 9,165,000 to 8,316,000. This is another healthy development.

Let’s turn our attention to the establishment survey. 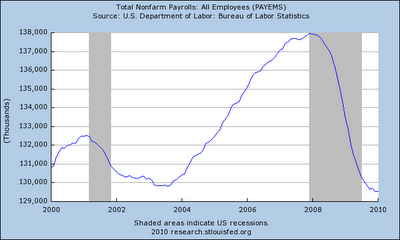 Let’s start with the total number of establishment jobs in the US (seasonally adjusted). The above graph illustrates two important and disturbing points. First, the US now has fewer jobs than the lowest point of the previous expansion. All the jobs gained during the last expansion have been wiped out. Secondly, the current total number of seasonally adjusted establishment jobs in the US is lower than the beginning of the decade. 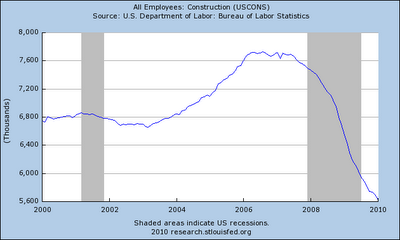 Eyeballing this chart we have see the number of construction employees has dropped by about 2 million (approximately 7.6 to 5.6 million). 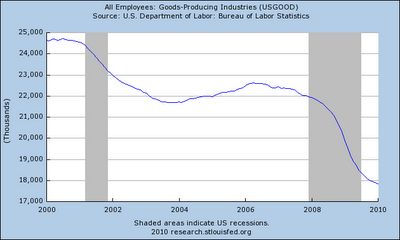 The manufacturing picture is very interesting. Notice that a large number of manufacturing jobs lost in the first recession of the decade were never replaced. Next, note manufacturers started to shed jobs in early/mid 2006. From this level manufacturing has lost about 4 million jobs (approximately 22 to 18 million).

Combine the construction and manufacturing jobs lost data with the unemployment rate by educational achievement data from the household survey and you get a very interesting picture.

The great recession wiped out lower education/manual labor jobs. And the experience of the manufacturing sector after the last expansion indicates those jobs aren’t coming back.