Although Conservative Party candidate Doug Hoffman can credibly claim to have become a “fan favorite” among conservative activists nationwide, the situation is somewhat different in NY-23 itself. According to reports filed with the FEC that cover contributions through October 14th, Hoffman had raised only $12,610 from among 23 itemized donations within NY-23. This contrasts with Democrat Bill Owens, who had raised $151,520 from 245 itemized contributions within the district, and (to a lesser extent) with Dede Scozzafava, who raised $36,100 between 58 donations. 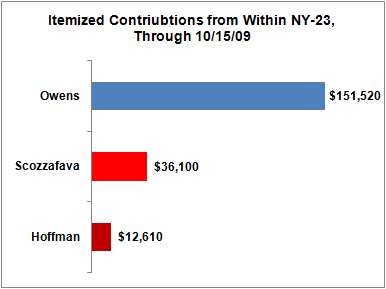 This analysis may lowball Hoffman’s numbers somewhat, since it doesn’t account for about $35,000 in unitemized contributions, some of which may come from NY-23, nor for any fundraising that Hoffman has done within the last two weeks (although the same is true of Scozzafava and Owens). And being unaffiliated with a major party, Hoffman obviously lacks some of the infrastructural advantages that a Democrat or a Republican might have. Conservative PACs, individual conservatives from across the country, and Hoffman himself are throwing plenty of money into this race on Hoffman’s behalf — so the cashflow hasn’t really been a problem for him.

Still, this in some ways mirrors the situation in Maine, in which the No on 1 (pro-gay marriage) side has received a dramatically larger number of contributions from within the state. In both races, there are some rather significant differences between the pollsters, some of which project disproportionate turnout among conservatives while others do not. Obviously, conservatives are feeling pretty empowered at the national level — but how will it translate into local politics? We won’t really know until Tuesday — but there is potentially something of a disconnect between projections of conservatives flooding the polls and these fundraising totals.