In devastated Haiti, like any other crisis zone affected by disaster or conflict, food security is foremost on the minds of the population. With large displaced populations, devastated markets and logistical struggles that make food-aid distribution a nightmare, food prices — which were already very high before the January earthquake — have already risen 10 percent. In addition, with the planting season just a couple weeks away, the country stands at risk for a food crisis that could become deeper, longer and have impacts on the economic viability of agriculture in Haiti for the long term. 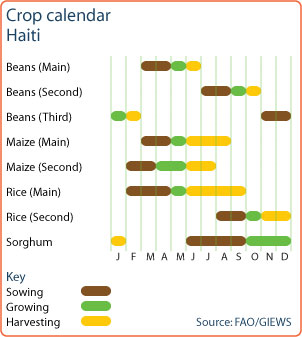 The availability of cheap and subsidized American staple crops, population growth and a highly degraded environment have left Haitian agriculture on the brink for decades now, so the post-earthquake food and agriculture concerns are not something new. For example, just 20 percent of rice, the calorie backbone for many Haitians, is produced in the country with 80 percent imported. However, the earthquake has added a level of chaos and gripping need that threatens to force Haiti into begging for food for a generation.

A key element here is the role of livestock, which have a particularly important place in agricultural societies. Relatively costly, large livestock are the main form of investment and savings for many rural people in Haiti, as it is across the developing world. Goats, pigs, cows and sheep can be bred for sale at market to earn income for a community or family; they are often used for dowries, and can be sold in times of emergency. 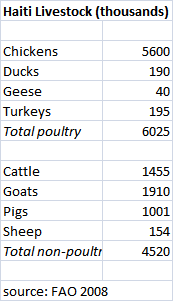 Here are some basic problems in the sector:

1. Local chickens are more and more being displaced by imports, which are often cheaper and easier to get a hold of in cities.

2. Pigs are susceptible to disease, particularly those spread through international trade. Haitian pigs had to be culled in the mid 1980s, and many were worried during the swine flu period that this could be repeated.

3. Cows are particularly expensive and relatively difficult to keep up. In times of high disease risk, like after a disaster, the cost of losing a cow is major.

4. Haiti’s more than 1,237,000 displaced people are separated from their livestock, which is a big barrier to economic restart.

5. Large livestock is just infeasible in situations of crisis. Particularly among large displace populations, there is simply not enough space to graze, nor sufficient available capital to purchase goats, sheep or cows for most people. In addition, many young people who have left urban areas are unfamiliar with livestock keeping.

Research in the Democratic Republic of Congo, where solving conditions of persistent hunger in the conflict-ravaged eastern Kivu provinces has been a longtime goal of international aid actors, may have part of a medium-term answer. The International Center for Tropical Agriculture, partnered with several donor governments, has begun to invest in guinea pig production as a “micro-livestock” option that can fight food insecurity in the region.

“The animals are also a relatively low-cost investment and reproduce quickly, with females capable of producing up to five litters per year, a total of 10-15 offspring. They also suffer from fewer diseases than pigs, chickens and rabbits, and in the event of disease outbreaks, their high reproduction rate means populations have a much shorter recovery time.”

With millions if not billions of donor dollars coming into Haiti, among other crisis areas, perhaps this type of livestock micro-finance is a good place to start. Capable of being raised by children, the disabled and other vulnerable populations, small, resilient guinea pigs could be cultivated in displacement camps — particularly where there is not space to bring traditional large livestock.

As we have seen over the last decade, small loans to poor families and individuals is a quite successful strategy for long term development and sustainability, particularly when concrete outcomes are self-perpetuating.

“’We’re not sure exactly how guinea pigs got to DRC,’ said CIAT forage scientist Brigitte Maass, ‘but they have enormous potential to improve rural livelihoods there.'”

From a practical perspective, guinea pigs and other livestock micro-finance could be piloted in a few communities in the Carrefour district just west of Port-au-Prince, where the largest camp settlements have sprung up since the earthquake. More than 300,000 people there are living in so-called “spontaneous settlements,” and are the most vulnerable populations for food insecurity.

Moving beyond Haiti, perhaps there is a space in other disaster or conflict zones for this type of small-scale investment in micro-livestock, whether guinea pigs or some other species. Of course, while in South America and DRC guinea pigs are fine cuisine; in some place (perhaps Haiti) the people may not find them an appetizing alternative. In those cases some other small, quickly reproducing species can be tried instead, with the key concept being local level ownership and sustainability of the effort.
—
Renard Sexton is FiveThirtyEight’s international affairs columnist and is based in Geneva, Switzerland. He can be contacted at sexton538@gmail.com