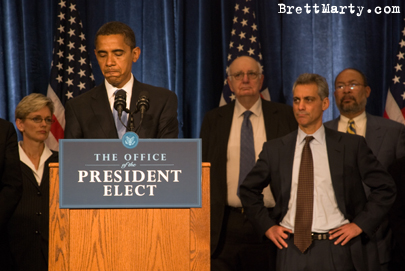 2:13 CST: [Nate] That was pretty impressive. Obama was charming and assertive, and the campaign has a real knack for ceremony and staging (e.g. the phalanx of economic advisers standing behind Obama). The press corps is going to love him, at least for the first several months.

Any real news here? Not much — although Obama more clearly articulated the need for an economic stimulus package than he had on the campaign trail. In spite of his protestations that we only have one president at a time, the first test of the strength of his mandate might be whether Congress can muscle a stimulus package through in the lame-duck session.

2:09 CST: [Sean] Lynn Sweet and Obama joke about her injury (which apparently took place when she was running to his speech in Grant Park), then she asks about what kind of dog Obama’s going to buy, which Presidents he’s spoken to, and where his girls will go to school. Obama jokes he’s only talked to “living” presidents, and it’s not a “Nancy Reagan type seance situation.” But has re-read Lincoln. Dog is very important, Obama says, a “major issue.”

2:05 CST: [Sean] Question: Is it important to move especially quickly to announce Cabinet appointments? Obama: “move with all deliberate haste, emphasis on deliberate as well as haste.” By the way, Nate is up close to the action, so it’s me for now.

2:01 CST: [Sean] Question: Did you respond to Ahmadinejad’s letter of congratulations, when will you send low level envoys to Iran, Syria, North Korea, etc. Obama: Iran’s nuclear program is unacceptable; I’ll review the letter and respond in due time. We only have one president at a time.

1:58 CST: [Sean] First question: what can any president do in the first 100 days to rebuild the economy? Obama: A president can do a lot. We need a stimulus package passed before or after inauguration. We need jobs, because hemorrhaging of jobs hurts consumer confidence and has enormous spillover effects. I’m confident a new president can have an enormous impact, that’s why I ran.

1:55 CST: [Sean] Focuses soberly on the economy right out of the gate. Seems in clear command. Questions upcoming, but it’s all economy, all specifics.

1:47 CST: [Nate] I wonder if Obama will have one of those presumptuously arrogant President-Elect seals at the podium.

1:40 CST: [Sean] Nate and I will be reporting live from the press conference at the Hilton on Michigan Ave in Chicago. Brett is somewhere running around taking pictures, the scamp. Maybe Flickr will even host them, or return Nate’s correspondence about why they’ve blocked all of Brett’s images and some of Nate’s. Anyway, should begin momentarily. 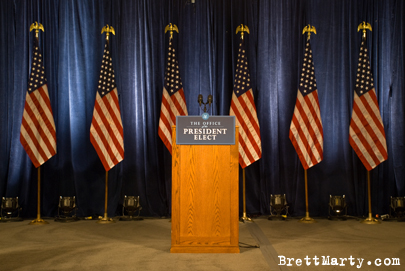