Welcome to FiveThirtyEight’s live blog of the Republican primaries in Wisconsin, Maryland and Washington D.C. As the votes are tallied, we’ll be bringing you data-driven observations, exit-poll information and historical context.

Of the 76 delegates that The Associated Press has called so far Tuesday night in Wisconsin, Maryland and Washington, D.C., Mr. Romney has a clean sweep, winning all 76 to 0 for Mr. Santorum. Mr. Romney’s total includes 2 super delegates from Washington, D.C.; the other 74 were elected based on the primary results.

Mr. Santorum is more likely than not to get on the scoreboard eventually by winning a Congressional district or two in Wisconsin — or perhaps the Sixth Congressional District in Maryland — but this is clearly not the sort of evening that is going to restore the Republican race to a state of being competitive.

With that, FiveThirtyEight is wrapping up its coverage for the evening. Thank you for joining us.

Based on the delegates counted so far Tuesday night and those accumulated previously, Mr. Romney has a 96 percent chance of winning an outright majority of Republican delegates, according to the default settings of FiveThirtyEight’s “magic numbers” calculator, which is a relatively simple top method to project the remaining delegates based on the ones that have been awarded so far.

Mr. Romney is also close to 100 percent certain to win at least a plurality of delegates, according to this method.

Wisconsin has been called for Mitt Romney, but of the votes counted so far, Rick Santorum is just a few percentage points behind Mr. Romney.

Mr. Santorum has been helped by a strong showing in the working-class Fox River Valley, particularly in Brown County, where more than 75 percent of precincts have reported results. Mr. Santorum currently leads Mr. Romney 44 percent to 36 percent in Brown, which is home to Green Bay. By contrast, Senator John McCain — the front-runner in 2008 — won 56 percent of Brown County votes.

There are still many votes to be counted, including vote-rich Waukesha County which has yet to report any results and will likely favor Mr. Romney. But if Mr. Santorum manages to exceed his polling, it may be largely because of support from paper mill and other industrial workers in and around Brown County.

Mitt Romney is doing conspicuously well so far in Kenosha County, Wis., where he leads Rick Santorum 53 percent to 30 percent with 15 percent of the vote reported.

Kenosha County, which is often competitive in general and primary elections, is at the heart of Wisconsin’s First Congressional District, which is represented by Representative Paul D. Ryan. Mr. Ryan endorsed Mr. Romney late last week.

Rick Santorum will need to beat pre-election polls and the exit polls by a good margin to win Wisconsin, but the county to have reported he highest share of its vote so far has a decent result for him.

In that county, Fond du Lac County in the east-central portion of Wisconsin, Mr. Santorum and Mitt Romney are essentially tied with 42 percent of the vote.

Fond du Lac County is reasonably populous and was a good bellwether for the state in 2008, with Senator John McCain and Mike Huckabee both receiving vote shares their close to their statewide figures.

9:17 P.M. Santorum Too Conservative for Wisconsin?

Here’s something unusual to see in the context of a Republican primary: voters in Wisconsin think that one of the candidates is too conservative, at least according to the exit poll of the state.

Exit polls have Mitt Romney ahead overall in Wisconsin, leading Rick Santorum roughly 43 percent to 35 percent, but most of his lead comes from Milwaukee, Madison and their suburbs. The remainder of the state, which account for 4 of its 8 Congressional districts, is roughly tied between the two candidates.

If Mr. Romney lost the toss-up districts but carried the state as a whole narrowly by winning the four Congressional districts surrounding Madison and Milwaukee, he would take 30 of Wisconsin’s 42 delegates.

Mr. Santorum’s best hope for victory is getting an extremely strong turnout outside of Madison and Milwaukee. Overcoming an 8-point deficit in the exit polls is very challenging, but not completely unheard of.

Jon M. Huntsman Jr. has 0.7 percent of the vote counted so far in the Republican primary in Maryland.

If the number holds, it will be Mr. Huntsman’s third-best state after New Hampshire, where he got 16.9 percent of the vote, and Vermont, where he got 2 percent.

Mr. Huntsman, who dropped out of the race on Jan. 16 and endorsed Mr. Romney, got 0.6 percent of the vote in the Iowa caucuses.

8:42 P.M. Romney Ahead in All Maryland Congressional Districts

So far, Mitt Romney leads easily in all six Maryland Congressional districts that have reported results so far, including in two — the First District and the Sixth District — where he was potentially in danger of losing delegates to Rick Santorum.

In the First District on Maryland’s Eastern Shore, Mr. Romney leads 54 percent to 28 percent so far. In the Sixth District, which is rural and reaches into the Appalachians, he leads 52 percent to 29 percent.

The votes are trickling in relatively slowly from these regions so the outcome could still change, but a clean sweep of Maryland’s 37 delegates is looking like a good possibility for Mr. Romney.

Despite the fact that no presidential candidates are on the Democratic ballot except for President Obama (although Maryland Democrats can cast an uncommitted vote instead), Democratic turnout has actually outpaced Republican turnout there so far.

Keep in mind that Maryland held primaries for many major offices tonight, so voters from the two parties had a reason to turn out regardless of the presidential race. Still, it does not look like Maryland will be the most likely place for Mr. Romney to pull off a major upset in November.

Mitt Romney’s victory in Maryland should earn him at least 31 delegates to the Republican national convention in Tampa, Fla.

Maryland was expected to go to Mr. Romney, but the delegates he secured there pushed him past an important milestone on his quest to be the Republican presidential nominee: Mr. Romney is now more than halfway toward the 1,144 delegates he needs to mathematically win the nomination.

Maryland brings Mr. Romney’s delegate total to 600 according to an ongoing count by The Associated Press. Rick Santorum, with 272 delegates, has less than half that amount.

Maryland is among the first states to hold its senatorial primary and lock in the match-up for November. The incumbent Democrat Ben Cardin has been declared the winner of his race by The Associated Press, and has 82 percent of the vote so far.

Republicans have a somewhat lackluster set of candidates in Maryland as measured by the traditional standard of previous experience in elected office. However, their race is competitive. So far, Daniel Bongino, a former Secret Service agent, leads 33 percent to 26 percent over Richard Douglas, a Bush administration defense department appointee. Republicans will need to catch lightning in a bottle with Mr. Bongino or Mr. Douglas to make the race competitive in November.

8:08 P.M. Romney Should Win at Least 31 Delegates in Maryland

News networks are projecting Mitt Romney to win the Maryland primary based on his large lead in the exit polls. He’s ahead of Rick Santorum by roughly 22 points, 50 percent to 28 percent, based on CNN’s exit poll, figures that are close to what was projected by pre-election surveys.

The only question is how close Mr. Romney will come to sweeping the state’s eight Congressional districts, which would give him a chance to win all 3
7 of Maryland’s delegates.

The exit poll contains some good news for Mr. Romney there as well, putting him ahead 46 percent to 34 percent outside of the Baltimore and Washington D.C., suburbs, where he is potentially weaker.

Both the First and Sixth Congressional Districts are quirky enough that Mr. Santorum might still have a chance there; the exit polls are not granular enough to pick up that kind of geographic detail. Still, it looks all but assured that Mr. Romney will take at least 31 delegates from Maryland.

7:59 P.M. Counties to Watch in Wisconsin

Polls close in about an hour in Wisconsin. But here are three counties to watch particularly closely while results are reported:

Waukesha County — Based in the western Milwaukee suburbs, Waukesha Republicans are well educated and generally affluent, characteristics that have been correlated with a higher affinity for Mitt Romney. Waukesha conservatives also tend to turnout in large numbers. Mr. Romney is all but certain to be the top vote-getter in Waukesha County, but pay special attention to the size of Mr. Romney’s margin. If it reaches the teens, Mr. Romney will likely win Wisconsin. If Rick Santorum can manage to hold Mr. Romney’s lead in Waukesha to the single digits, he could have a shot at pulling off what would be a significant upset.

Eau Claire County — This region, dotted by dairy farms, is fertile ground for Mr. Santorum. Although far less populated than Eastern Wisconsin, Eau Claire County is representative of the more socially conservative Western portion of the state. Mr. Santorum will need to score large victories in Eau Claire and surrounding counties to have a chance in the state.

Brown County — Anchored by blue-collar Green Bay, Brown County represents something of a middle ground, politically, between more moderate Waukesha and more socially conservative Eau Claire. Mr. Romney is perhaps still slightly favored here, but the region is heavily populated by the type of working-class voters who have sometimes been slow to warm to the Romney candidacy. If Mr. Romney begins to build a substantial lead in Brown County, it may be a sign that that warming is happening at last.

I’m not an everyday consumer of the Drudge Report Web site (I prefer Twitter and the algorithmically driven site Memorandum to meet my aggregation needs). But its proprietor Matt Drudge has a knack for news, and a lot of political reporters swear by it. The site sort of represents the Keyensian beauty contest for the news media, linking to the stories that everybody thinks everybody else cares about, and can drive coverage accordingly.

By that standard, the primaries in Wisconsin and Maryland on Tuesday night rate as a low-priority story. Mr. Drudge’s site, which is usually filled with links to horse-race stories in advance of a major primary or caucus, had just one link to a Wisconsin story as of 7:45 p.m. 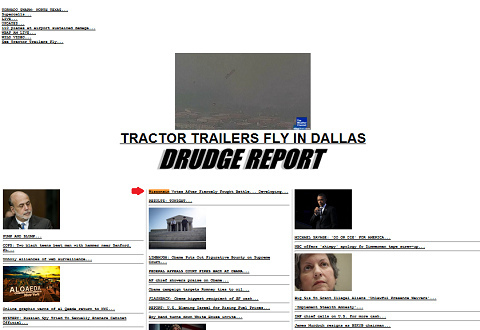 7:40 P.M. Non-Republican Participation Is Up Slightly in Wisconsin

Non-Republican participation in Wisconsin’s Republican primary appears to be up from 2008. Preliminary exit polls show about 6 in 10 voters self-identified as Republicans on Tuesday. In 2008, 73 percent of the Republican electorate described themselves as Republicans.

7:37 P.M. In Wisconsin Exit Polls, No Sign of Evangelical Surge

My colleague Dalia Sussman noted earlier that Wisconsin contains fewer evangelicals and very conservative voters than most of the states that have voted recently. But an equally important comparison is to how the state voted in 2008.

According to the preliminary exit polls, 36 percent of Wisconsin voters called themselves born-again or evangelical Christians. In most of the states that have voted so far this year, that number has been up somewhat from 2008. But the figures are down slightly in Wisconsin (although within the margin of error of the poll), since 38 percent of voters described themselves that way in 2008. They are also lower than expected by some pollsters, who had been projecting a number closer to 40 percent.

The number of voters who described themselves as very conservative in the exit poll, 31 percent this year, is up slightly from 2008, when 27 percent did.