Since we got some good discussion started in the polling thread about the possibility of a 269-269 electoral tie, I thought I’d run some numbers on it.

The simulation returned a tie 63 times out of 10,000 trials (0.63%). These 63 ties involved 56 distinct scenarios for producing that tie. The only scenarios to occur more than once were as follows:

4 Times: Obama wins Kerry states plus Iowa, Colorado, and New Mexico, but loses New Hampshire. This is one of the two “obvious” scenarios. It matches the current polling in every state but Nevada, which would have to flip to McCain.

2 Times: Obama wins Kerry states plus Iowa, Ohio, Nevada and New Mexico, and Nebraska’s second congressional district, but loses Michigan and New Hampshire. People talk about Ohio like it’s an impossible climb for Obama and Michigan like it’s his to lose, but there’s really not a whole heck of a lot of difference in the polling between the two states at this point in time.

2 Times: Obama wins Kerry states plus Iowa, Ohio, Colorado and Nevada, and Nebraska’s second congressional district, but loses Pennsylvania and New Hampshire. Sort of the equivalent of the scenario above.

By the way — with realistically 15-20 states still in play and almost six months to go until the election, we shouldn’t think of any one scenario as being particularly probable. For example, how often does Obama wind up with exactly the same map that John Kerry did? Just once in 10,000 trials in our most recent simulation run. This is a pretty good sucker bet for those so inclined … lay your friend 20-to-1 odds that Obama’s map will match Kerry’s exactly; he’ll probably be happy to take it. But the odds are much, much longer than that.

So what happens if there is a tie? The Cliff’s Notes version of the 12th Amendment is as follows:

1. The incoming (newly-elected) House votes on the President. But they don’t take a straight up or down vote. Instead, each state’s delegation gets a vote. So California, which has 53 representatives, gets one vote based on what a majority of those representatives decide. Delaware, which has just one representative, also gets one vote. In order to win the Presidency, a candidate must receive the votes of an outright majority of 26 state delegations. This is more difficult than you might think, because delegations with an even number of members can be split, and a couple probably will be — right now Arizona has four Republican representatives and four Democratic ones, for instance.

Below is a summary of what the incoming House delegations are likely to look like, based on current ratings from the Cook Political Report. I describe a state as “safe” if and only if the number of safe seats for one or another party constitutes an outright majority of that state’s delegation. Otherwise, I characterize the state as on a spectrum from “Likely GOP” to “Likely Democrat”. I also include a projection of the incoming delegation, which is determined by assigning a 90 percent probability that a candidate who Cook describes as ‘likely” to win his district goes ahead and does so, a 75 percent probability if the race is described as “leaning” toward that candidate, and a 50 percent chance if the race is a “toss-up”.

This data can be summarized as follows: 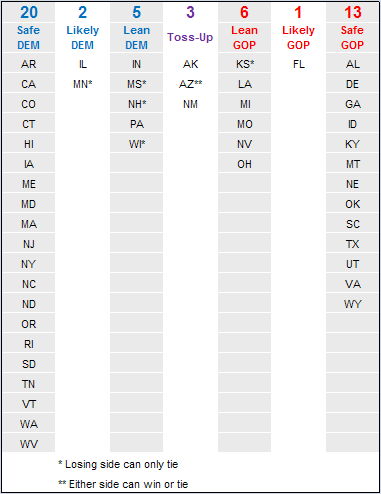 The Democrats are either certain or very likely to have the majorities in 22 of the state delegations. Another three delegations lean their way, while three others are toss-ups. Most likely, we are looking at their holding somewhere between 25 and 28 delegations — though maybe as many as 30-32 if they have a particularly good day (Cook’s ratings arguably look too pessimistic for the Democrats in light of the recent special elections).

The Republicans look to have a much tougher time in getting to their magic number of 26 delegations. If they win all their states plus all the toss-ups plus all the Democratic-leaning states, that still only gets them to 25 because the best they can realistically do in Mississippi, New Hampshire and Wisconsin is to salvage a tie. And keep in mind that this scenario requires that something has gone horribly wrong for the Democrats — in which case Barack Obama will probably have been crushed by John McCain rather than tied him.

So realistically we are looking at the following:

– The Democrats are likely, though not certain, to control an outright majority of House delegations. The Republicans will almost certainly not have an outright majority, though they might prevent the Democrats from having one.
– The Democrats are also likely to have at least 51 votes in the Senate and therefore the ability to pick the Vice President. This is because Democratic switches appear near certain in New Mexico and Virginia. Even if the Republicans swung Mary Landrieu’s seat in Louisiana, held onto everything else, and got Joe Liberman’s vote, that still adds up to just 49 votes for them.

Of course, I’ve been assuming up until now that the representatives would vote with their parties, rather than with their states or their districts, which is not something that can be taken for granted. There is a good discussion here about which representatives might be most likely to switch. But I tend to discount these possibilities at least somewhat because (i) the Democrats have all the leverage, since the Senate will presumably have selected a Democratic Vice President as the default option; (ii) some Democrats who were otherwise on the fence might feel like they were getting one back for 2000 (even if Obama lost the popular vote) and (iii) the fact that Obama would be the first African-American President might make it especially difficult to deny him the job.

If the electoral college ends in a tie and Obama wins the popular vote, I would guess the odds of his eventually becoming president would be upward of 97 percent. If McCain wins the popular vote there is more potential for Democratic defections, but I’d still expect Obama to be selected at least 75 percent of the time.

For the time being, the simulation will continue to treat 269-269 ties as Obama victories. If something changes such that the Republicans have a more realistic path toward controlling either 51 votes in the Senate or 26 delegations in the House, we may revisit that assumption.