I sometimes describe myself as a “libertarian in theory, liberal in practice”. At times, I’ve found the idea of a third party seductive, but I’ve never voted third party for a major office. But the whole Ron Paul phenomenon sufficiently piqued my curiosity that I attended his rally when Paul passed through town last August.

It was really something to see. The crowd was a relatively diverse mix of city-dwellers and yokels, hippies and hipsters and yuppies (it was, however, overwhelmingly white). The impression I was left with was that these were people who followed the news, but were generally disdainful of the political process itself, at least insofar as it involved the two major parties. It did not seem like Paul was “stealing” votes from anyone in particular.

What was more remarkable was the relative diversity of ideological opinion within the audience. When Paul said something about the war in Iraq, most everyone stood up to cheer. But there was a less enthusiastic response when he spoke of withdrawing back from the world stage generally. One part of the crowd stood up when Paul talked about the influence of corporate lobbyists, another when the subject was civil liberties, and a third when he spoke of monetarism and the Gold Standard. It was a bit like watching the State of the Union address, when Nancy Pelosi and Dick Cheney each do plenty of standing and clapping, but never quite in unison.

Such ideological diversity was also on display at the Libertarian Party National Convention this week, where candidates as diverse as Bob Barr (who authored the Defense of Marriage Act) and Mike Gravel (who advocates single-payer health care) sought its nomination. Barr was eventually nominated, receiving 54 percent of the delegates on the sixth ballot after Wayne Allen Root threw his support Barr’s way. 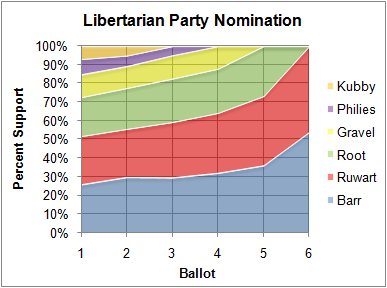 The result will no doubt upset some capital-L Libertarians, particularly those on the libertarian left, who might feel as though Barr is a bit of an impostor. But it is a decision that opens up the Libertarians’ tent. And if the Libertarian Party is ever to achieve viability at the national level, it will need to have a bigger tent. Just as the Democrats can accommodate a Travis Childers and a Pete Stark, or the Republicans an Olympia Snowe and a Rick Santorum, the Libertarians can accommodate a Mike Gravel and a Bob Barr. National parties require support which is both broad (spanning a fairly wide space on the ideological spectrum) and deep. The Libertarian Party has expanded its breadth; it will now need to work on its depth.

Indeed, the decision to nominate Barr may well have fewer implications in 2008 than it does in future election cycles. In particular, it seems to me that there is some chance that the Libertarian Party will become the de facto third party, remaining vaguely aligned with some core beliefs like the protection of civil liberties, but otherwise accommodating a fairly wide array of political thought. More fundamentally, it would become a party driven less by ideology and more by a desire to win elected office. The Libertarian Party has some infrastructure in place and a fairly decent brand name (hey, who doesn’t like liberty?). And while Barr is not a terrific political athlete, he does come across as pragmatic and perhaps fairly mainstream, and is probably a better long-run spokesperson for the party than someone like Ron Paul.

Barr’s goal this year — and it must be considered a long-shot — is to achieve the 15 percent support he’d need in national polling to be invited to participate in the presidential debates in September and October. If that happens, the Libertarian Party would literally be sharing the stage with the Democrats and the Republicans for the first time. While that probably wouldn’t be enough to win them any electoral votes in 2008, it would certainly make their convention worth watching in 2012.